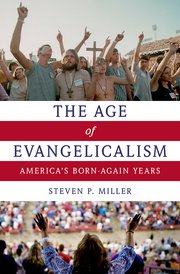 I read a lot of books. Most professors can make similar statements because we read for our jobs as well as for fun. I read anthropology and philosophy, religion and science, far too much Sci-fi and lately The Adventures of Captain Underpants. (Anyone with an eight-year-old boy will know that last title.) But for the last several years I haven’t read much in the way of Evangelical history in part because I felt as if I’d exhausted the genre. For several years in the early 2000s I taught courses at Concordia University and Connecticut College on the history and development of American Evangelicalism and preparing for those courses caused me to develop a fairly extensive library of Evangelical histories and anthropological treatments. As religious movements go, Evangelicalism is still in its infancy, so the histories deal only with a few centuries at most, and once you’ve read a dozen or so, the differences between them become largely academic. If you’re interested, I recommend Mark Noll’s The Old Religion in a New World: The History of North American Christianity and George Marsden’s Fundamentalism and American Culture as good places to begin your study of the topic. But today I’ll recommend a new text to you.

Over Christmas break I devoured Steven P. Miller’s The Age of Evangelicalism: America’s Born-Again Years. And while this is a blog and not a book review, I will tell you what I found so compelling about the text. First and foremost, it avoids the pitfalls of so many other histories of American Evangelicalism, so let me outline those shortcomings first. In my experience, most histories of A.E. fall into three camps. First, there are those histories written by professional historians of religion (Noll and Marsden fall into this camp.) that trace the history of modern Evangelicalism back to it’s roots in the First Great Awakening or even the European Reformations. For history and theology buffs like me, these are fun reads because they highlight continuities and connections between “mainline” traditions and Evangelicalism. The basic operating thesis of most of these texts is that Evangelicalism has always been there, but due to class associations, it has usually been an under-appreciated contributor to the American religious tradition. In short, these books rewrite the entire history of American religion so as to highlight the Evangelical strain and its contributions. They are, if nothing else, thorough.

A Second camp of histories of A.E. are straightforward works in political history that focus almost exclusively on the different waves of Evangelical influence in American politics. Early chapters in these texts usually focus some attention on abolitionism, temperance movements, and the Scopes trial. But then they tend to jump ahead to the presidency of Richard Nixon and plunge headlong into the ascendency of political movements like the Moral Majority of Jerry Falwell and the Christian Coalition of Pat Robertson. The Reagan presidency usually serves as the central pivot in these texts, while ironic attention is paid to the Southern Baptist roots of Jimmy Carter and Bill Clinton. Again, there is nothing wrong with these texts per se, but they don’t offer the student of A.E., especially if you lived through these years, much to chew on. Their focus is political and Evangelicalism is treated like any other special interest group.

A third variety of histories of A.E. histories takes up the Liberal Evangelical project and works to complexify the story that is usually told about Evangelicalism. These histories are deliberately corrective and try to shift the focus away from the conservative Evangelicals who tend to dominate most historical works, especially those that focus on politics. Evangelical history does not equal Conservative Evangelical history! Lost in the Middle? and Found in the Middle!, the books that launched LiberalEvangelical.org fall into this category, though Wildman and Garner try to do more than offer historical treatments. These works argue that Evangelicalism is now and has always been about more than the simple Conservative slogans propagated by its most vocal and conservative proponents. There are powerful progressive and tolerant strains of Evangelicalism that continue to thrive, though they tend to do so largely beyond the view of outsiders.

Steven Miller’s The Age of Evangelicalism is so interesting because it doesn’t quite fit into any of these sub genres. First, itâ’s not an attempt to tell a theological or social history of American Evangelicalism. It’s focus is much tighter. Second, while Miller deals with the political influence of Evangelicals in the U.S. since the 1970s, he is less interested in electoral politics and more interested in larger cultural movements and sociographic trends. Third, while Miller does a nice job of not focusing exclusively on Conservative Evangelicals, he is isn’t in the advocacy business. He notes the contributions of Progressive Evangelicals – he tends to refer to them as communitarians – but doesn’t try to tell the story as if they were the protagonists. Instead, Miller’s book is about America broadly and the ways in which American culture has been changed by the rising influence of Evangelicals in both popular culture and politics.

On a personal note, it was particularly interesting to me, as someone whose lifespan coincides almost exactly with the period that Miller covers, to rehear so many of the events of my youth, and to re-experience so many of expressions of popular culture that I grew up with. But Miller doesn’t just retell history, he highlights the ways in which trends in Evangelical culture and music as well as the growing purchasing power and visibility of Evangelicals have affected Hollywood, the music industry, political campaigns, college campuses and the book publishing business. Evangelical history has, in short, become so entangled with American political and cultural history broadly that the later story and the former story must be told together. His case is compelling and a fascinating read.

Why am I pushing this book on you, my LiberalEvangelical readers? Because I think books like this go a long way in combating one of the deep sicknesses that lie at the bottom of so much Evangelical thinking: a tendency to perpetuate the myth that we as Evangelicals are a persecuted minority, outsiders who must hunker down and consolidate our communities against outside influences. In this direction lie the worst excesses of sociographic prudery i.e. a tendency to cultivate tightly knit communities of like minded thinkers who never challenge us to look beyond ourselves. Miller’s book retells the history of Evangelicalism and our influence on American culture in such a way that it becomes impossible to see ourselves as outsiders. Our history is American history. But this should not be taken as permission to elevate ourselves and “take back” the United States from interlopers. Rather, Miller shows us that American ideals as well as American foibles are Evangelical ideals and foibles, and this ought to serve as a great lesson in humility for all Evangelicals, Liberal and Conservative.

Take your religion into your own hands