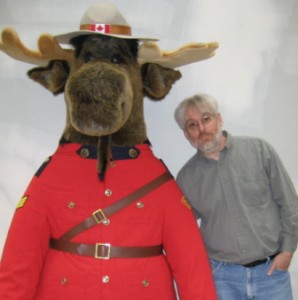 Scholars have long debated the differences between theological studies and other academic disciplines. An age old point of contention is whether theological claims are based on some form of knowledge. Associate professor and chair of religion at Brandon University, K.L. Noll (pictured at right with the moose), recently posted an article in The Chronicle of Higher Education that addresses these questions. And his article is stirring up quite a bit of reaction.

In his article, The Ethics of Being a Theologian, Noll argues that theology and religious studies are qualitatively different disciplines. Disturbed by the fact that people often confuse the two, he wants to clarify the distinction between them. He says that the academic study of religion advances knowledge; it is “the study of people” and does not claim divine revelation or facilitate so-called enlightenment. Rather it exposes presuppositions of truth claims made about the divine from the perspective of “secular, academic wisdom.” Conversely, theology “does not attempt to advance knowledge”; it is “a set of words about a god” from the perspective of “sacred, esoteric wisdom.”

Take religious ritual. Noll says that a religion scholar evaluates ritual as “human behavior that accomplishes nothing except the construction of concepts about its own legitimacy.” Offering the Eucharist as one such ritual, Noll notes that many Christians practice the Eucharist, but they are blind to the “construction of concepts” beneath it. Though theologians would argue for “genuine changes in the participant” in such rituals, the interpretations of theologians are irrelevant to the religion researcher. Noll says the relation between the religion researcher and the theologian is like “the biologist” and “the frog in her lab.” As the biologist investigates how the anatomy of the frog works, so the religious scholar investigates how religion works, including the theologians within religious communities.

Noll connects his main point – that theology does not advance knowledge – to ethics. He wants theologians to take responsibility for the consequences of their claims. If they imagine their claims are based on empirical knowledge, they are dishonest and therefore unethical, he argues. For example, when theologians give “the public a false sense that theology represents an advance in human knowledge,” Noll considers this unethical.

Theologians’ failure to meet their ethical obligations is particularly significant with respect to the Bible and other sacred writings – pronouncements about the Bible routinely lead the less informed astray. Not infrequently, theological concepts are packaged as the conclusions of historical research. The problem is not merely that biblical characters like Moses or Jesus are presented to the public as figures of history on the slimmest of evidence, but, more insidiously, that biblical claims about human obligation to a god are presented as though they are supported by some kind of evidence. Theologians who do not think of themselves as unethical nevertheless sell their pew-sitting laity a bill of goods. The failure of theologians to remind the members of their churches and synagogues that the Bible is an anthology of ancient literature composed by ancient people in an ancient culture has consequences. The laity are entitled to know that any god described in a biblical text is an ancient god, a byproduct of the ancient culture that produced the text. The god of the Bible is the sum total of the words in the text and has no independent existence. It would be reasonable to begin every theological discussion with the disclaimer “the god described in this sacred text is fictional, and any resemblance to an actual god is purely coincidental.” This is not an outsider’s dismissive opinion, but the reality, and theologians have an ethical obligation to teach that truth even if they also want to believe and teach, as is their right, that a god exists; theology is not knowledge and must position itself apart from those academic disciplines that try to advance knowledge.

Many comments have been posted in response to Noll’s article. Most of them are in disagreement with his position, while some concur. The entire debate may offer Liberal-Evangelicals food for thought.

One comment says Noll’s position fails to account for “extra-biblical documents” that “prove the historicity of Jesus.” This respondent recommends reading books like The Historical Reliability of the Gospels by Craig Blomberg, or Can We Trust the Gospels? by Mark D. Roberts.

Excerpts from other comments are as follows.

“Much of what the author asserts is based on a straw man argument. The final statement in the quote is simply a dogmatic assertion.”

“This piece ought to be required reading in every department of religion or religious studies and by the officers of the American Academy of Religion.”

“Theologians are in the business of justifying beliefs. More recently, in the United States groups of theologians have concocted justifications for the structure and behaviour of nations to support belief-based moral or social systems. Beliefs generate their own premises in order to fit circumstances that allow for self preservation. A scholarly theologian should agree that, in essence, his or her pronouncement can not be ethical in the classical sense; theology has no measure or standard of accurate reporting while an evolution account does have ethical and technical standards – the first personal attack, the first name calling, shall come from the theologian. Once the flower of reason has lost its petals only the thorns remain to sustain a scholarly conversation.”

“This article strikes me as being informed by a rather flat-footed empiricism content to draw sharp distinctions in its own favor.”

“The basic premise here is that the author is cognizant of his own biases and that theologians are not. How presumptuous! According to the author, Religious Studies is inclusive and forgiving and able to referee the academic pursuits of those who engage the ‘faith’ question while Theology is hopelessly caught in a quagmire of unreflective belief.”

“How any academic could be so glib about and comfortable with ‘killing’ the object of one’s study is beyond me.”

“Another ‘religion’ expert who thinks he knows something and knows nothing.”

“Surely this article is a joke?”

“This is complete and utter BULLCRAP! He’s not really talking about real knowledge versus fantasy, in the exact postmodern terms that he deplores, he is talking about who gets to construct so-called knowledge.”

“Since the writer claims we should be using a host of Enlightenmnet discourses to inform our work, he seems to either know next to nothing, or rather care about philosophy of science.”

“This is an anti-intellectual piece of religious culture wars fodder.”

Noll’s article in The Chronicle of Higher Education