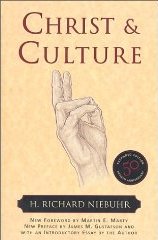 Though the text came out in 1951, the content of Christ and Culture grew out of a series of lectures H. Richard Niebuhr gave to seminarians in 1949. Many of the aspiring ministers in the audience would have been veterans of the recent conflicts in Europe and the Pacific, well aware of the dangers of elevating a state or political leader to semi-divine status, but equally aware of the great goods that a culture can produce when its people rally around a just cause. What then, Niebuhr asks, ought to be the relationship between Christ and culture?

Niebuhr begins by alerting us to the timelessness of this “enduring problem.” There is an inherent tension between Christ, his character, and the claims he makes on his followers on the one hand, and the demands of culture, any culture, on the other. The Romans early on made this point when they highlighted the extent to which followers of Christ neglected their cultural and social duties, but the tension persisted even as the empire was “christianized.” Throughout Christian history some have argued (and even today some still insist) that Christians make the best citizens, but Niebuhr calls the reader’s attention to the perpetual potential for opposition that lurks below the surface. Culture never captures Christ. Christ is never tamed.

As the title indicates, the dynamic tension between Christ and culture is Niebuhr’s central concern. It is a perpetual tension. Nevertheless, we find ourselves tempted again and again to resolve this tension or offer a final solution or program for overcoming it. The bulk of Niebuhr’s work is dedicated to examining these various strategies for circumscribing the relationship between human culture and Christ. With consummate historical care he describes five distinct approaches to the problem that Christians have taken through the centuries, pausing to examine the root assumptions and biblical heritage of each. In successive chapters he names these five strategies: Christ against culture, the Christ of culture, Christ above culture, Christ and culture in paradox, and Christ the transformer of culture. Niebuhr also goes to great lengths to show the historical legacy of each approach to the issue of Christ and culture by anchoring his treatment in classical as well as contemporary thinkers.

In his second chapter Niebuhr explores the notion that Christ is against culture and finds precedent in the tradition for the radical juxtaposition of Christ and human cultural values. However, in his third chapter he also locates biblical and theological foundations for identifying Christ with the cultural achievements of Christendom. These two solutions to the question of Christ’s relation to culture are not as H. R. Niebuhr complex as the three that follow. In chapters four, five, and six Niebuhr interrogates three strategies for naming the relationship between Christ and culture that work to recognize the value inherent in both. Chapter four explores the formulation of Christ above culture. Here Christ is part of the culture, but located at the absolute apex as both an exemplar and source. Alternatively, chapter five looks toward an appreciation of the paradoxical relationship between Christ and culture in which both are understood as goods even as they remain irreconcilable. This strategy promises most fully to preserve the tension between the two sources of norms, as it works to generate an honest portrayal of our condition as Christians with dissonant values. Finally, Niebuhr explores the formulation of Christ as the transformer of culture in which Christ simultaneously stands above or beyond human culture on the one hand, thus emphasizing the distinction between the two, and in the midst of human strivings as a compelling force for transformation.

In his final chapter Niebuhr works to defuse possible misinterpretations of his work. Despite the linear form that any text must take, his exposition is not intended to build toward a climax or solution. There is no final solution, no one formulation that might capture the right and proper relationship between human culture and Christ so as to settle the tension once and for all. There is value in the tension. He writes, “Yet one is stopped at one point or another from making the attempt to give a final answer, not only by the evident paucity of one’s historical knowledge, as compared with other historical men, and the evident weakness of one’s ability in conceptual construction, as compared with other thinkers, but by the conviction, the knowledge, that the giving of such an answer by any finite mind, to which any measure of limited and little faith has been granted, would be an act of usurpation of the Lordship of Christ which at the same time would involve doing violence to the liberty of Christian men and to the unconcluded history of the church in culture.” In the apt phrase, “the unconcluded history of the church,” Niebuhr captures something of tension between Christ and culture that continues to play itself out over time in new and transforming ways. Despite his erudition, he is unwilling to rob future Christians of this tension by recommending a final formulation.

The Takeaway for Liberal Evangelicals

Perhaps no issue is more important to moderate Christians (even if we do not know it) than the relationship between the claims of Christ and the claims of our culture. When we strike an intentionally moderate stance, we stand on the principle that Christ cannot be encapsulated in any political or cultural program. Thus we hold firm against any move to profess absolute loyalty to a party or ideology and reject calls to demonize those with whom we disagree. Niebuhr’s text is a powerful tool for coming to a better understanding of the persistent tension between Christ and cultural pretenders. The danger in reading this book with early twenty-first century eyes is that we misread Niebuhr as a reflecting on the relationship between church and state. While important, the church and state issue is less important the larger question of how we might think about the complicated relationship between Christ and human cultural achievements – government being but one such achievement. What is more, Niebuhr’s classic text gives us a concise glimpse into many of the biblical resources for thinking about this issue as well as sharing with modern readers something of the timelessness of the question. As moderates, constantly on the lookout for resources that might help us better to understand and defuse the powerful rhetoric on the far ends of the political and theological spectrum, we can mine Niebuhr’s text for some genuine historical perspective and wisdom.