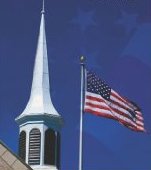 On the heels of recent July Fourth celebrations, church services, and flamboyant patriotic speeches, Americans have returned to regular work schedules this week. But some of us are left with questions of how the relation between God and country should be understood. Since some of the holiday’s songs, such as “God Bless America,” merge the two so closely, it is no wonder that the world often identifies America as a Christian nation. For many American Christians, however, this is a problem.

What is the role of Christianity in America and how should liberal-evangelical moderates understand the relationship between their religious beliefs and U.S. politics? Political and religious leaders differ on this issue. However, many agree that merging faith with politics is dangerous. Has Christianity been too closely identified with patriotism? The views of a reverend and a senator may shed some light on this issue.

Rev. Gregory Boyd (pictured at left), senior pastor of evangelical mega-church in Woodland Hills, St. Paul, Minnesota, and author of books such as Seeing Is Believing, Repenting of Religion and Letters From a Skeptic, thinks that Christianity has been dangerously conflated with patriotism. In his article “Taking America Back for God?” Boyd laments that evangelicalism has mistakenly blended theocratic ideals with America – and he considers this idolatry.

In the article, he recalls an experience shortly after the Gulf War in 1992. He was visiting a mega-church at the time and noticed that the cross and the American flag stood side by side at center stage. Then, a “well-known Christian military general” spoke about how God blessed America with a “speedy and almost ‘casualty-free’ victory.”

Watching the response of the congregation to this service (which included a video of fighter jets flying over crosses), Boyd “was struck with horrified grief.” He wondered how “the cross and the sword” could be “so thoroughly fused without anyone seeming to notice.” More poignantly, he wondered how “Jesus’ self-sacrificial death” could “be linked with flying killing machines?” How could Christians reduce the “kingdom of God” to “this sort of violent, nationalistic tribalism?” Boyd pondered the question, “Has the church progressed at all since the Crusades?”

Boyd is concerned that “the evangelical church in America has, to a large extent, become intoxicated with the Constantinian, nationalistic, violent mindset of imperialistic Christendom.” He cites evidence for this concern in slogans encouraging Christians to “take back America for God,” thinking that “America was founded as a Christian nation but has simply veered off track.”

He thinks this outlook powers protesting abortion and gay marriage, fighting for prayer and the ten commandments and creationism in schools, censoring the movie industry, controlling the supposedly liberal media, and marginalizing liberal groups like the ACLU.

Boyd discusses the key problem as the “myth of America as a Christian nation.” Importantly, this nationalistic myth “links the kingdom of God with certain political stances within American politics,” which has “greatly compromised the holy beauty of the kingdom of God to non-Christians.” This myth distorts the main mission of the Church, and the “American flag has smothered the glory of the cross, and the ugliness of our American vision of Caesar has squelched the radiant love of Christ.” Instead of hearing the beauty of the gospel, says Boyd, “many now hear the good news of Jesus only as American news, capitalistic news, imperialistic news, exploitive news, antigay news, or Republican news.”

In light of these concerns, Boyd wants to encourage Christians to “reject any and every fusion of the kingdom of God with our political agendas, whether Republican or Democratic, liberal or conservative.”

John Danforth (pictured at left), former U.S. senator and U.S. ambassador to the United Nations, is also an ordained Episcopal priest. He is also concerned about this issue. In his article, “Are Christians Reconcilers?” Danforth chimes in on some of the same notes struck by Boyd. For Danforth, Christianity should be understood as reconciling rather than dividing. Instead, it has “become a divisive force in American public life.”

Confusing “one’s own political agenda [with] God’s agenda” is at the heart of the problem, for Danforth. Because of this confusion, Christians think that “voting for a candidate who favors legalized abortion or gay marriage would not be voting Christian.” But Danforth notes that this view is “not supported by the Gospels.”

Constructively, Danforth offers a positive alternative to the Christian patriotism view. What should guide “the entirety of our life, including our politics” is the commandment to love our neighbors. This means that love trumps political agendas, and this requires cultivating Christian virtues.

Most importantly, Danforth encourages humility. If Christians in America become more humble, reconciliation will follow. “Reconciliation depends on acknowledging that God’s truth is greater than our own, that we cannot reduce it to any political platform we create, no matter how committed we are to that platform, and that God’s truth is large enough to accommodate the opinions of all kinds of people, even those with whom we strongly disagree. … Our faithfulness in politics depends less on the content of our ideology than on how we view ourselves and how we treat each other.”

Many ministers avoid preaching about politics. The most adamant voices in this regard are heard from the far left and far right, with very different accents. But there is an important message in Boyd’s and Danforth’s writings, one that also coheres with Jim Wallis’s best-seller God’s Politics, older writings from John Howard Yoder, Stanley Hauerwas, Wildman and Garner’s Found in the Middle!, and others. Perhaps it is time for preachers to encourage congregations to think critically about the relation between Christianity and patriotism by addressing politics and nationalism from the pulpit – but in a different way that most churchgoers haven’t heard lately.

The articles of Boyd and Danforth

For more on faith and the political process

“Energize the Base?” Why not call it what it is…appeasement.