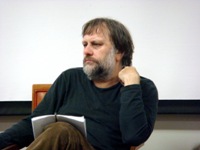 What is a holiday feast without discussion? If your experience of the Thanksgiving holiday is anything comparable to mine, it provides a venue for communing with family and friends, appreciating delicious homemade dishes, playing games, watching football, and discussing a range of topics. During our periods of “table talk,” or “kitchen talk,” or “living room talk,” or “stoop talk” we will probably fall upon topics like full body security scanning at US airports, the Pope’s recent statement on the use of contraceptives, the death dealing exchange between North and South Korea, and the Queen’s statement before the General Synod of the Church of England declaring that both religious and non-religious people contribute to societal well-being. In the age of information technology we now have the capacity to bring others into our conversations as well, and if one wants to add a bit of spice to the Thanksgiving mix, one may invite the philosopher, professor, politician, and cultural critic Slavoj Žižek to the table.

The disheveled and unassuming Žižek was recently interviewed by Riz Khan on the television program of the same name. During the 22 minute exchange, Khan posed questions about global climate change, capitalism, biogenetics, and social divisions and imbalances, which are the topics addressed in Žižek’s new book Living in the End Times. And, refreshingly, Žižek was given enough time to respond in some detail to each question.

After a brief discussion about why Žižek chose these four topics over the thousands of other possible topics, Khan launched into questioning Žižek directly about each of the four, beginning with capitalism. In light of the global financial crisis, Khan asked, “Are we seeing basically the collapse of capitalism?” With little hesitation Žižek asserted that current economic conditions are not drawing the period of capitalism to a close, but are, instead, making capitalism “leaner and meaner.” He claimed, in addition, that the economic collapse that is crunching the pocketbooks of millions worldwide was not the result of the greed of a few individuals, but the result of a system that functions like a “religion” with its own ideology, an ideology of profit. “Don’t blame morality where more systemic forces are at power,” quipped Žižek.

Following these words, Khan asked Žižek what he thought about “tolerance.” To this question Žižek responded, “Tolerance is a notion of disorientation.” In a time where most people perceive social conflict to be the result of cultural differences and not serious political orientations, Žižek feels that tolerance is a way of keeping others at a distance. Coining a keen term, i.e., the “decaffeinated other,” to represent this stance, Žižek observes that many people have a tendency to remove the challenging aspects of other people’s views as a means for generating social cohesion. As an alternative, Žižek calls for differences to be directly addressed and robustly discussed.

In respect to climate change, Žižek made use of the psychoanalytical term “disavowal” to describe our response to the looming crisis. “Disavowal” can easily be understood by the phrase: “I know very well, but“. For Žižek, society perceives and understands the danger that is rapidly approaching, but “in our guts” we cannot conceive that such dangers might actually come to pass. Similar to the other topics, Žižek believes that only systematic change will ameliorate the climate crisis. Citing President Obama’s response to the recent BP oil rig explosion and the subsequent oil spill polluting millions of gallons of sea water, Žižek argued that systematic problems cannot be resolved by chasing after individual criminals, but only by “changing the basic parameters of the system,” that is, altering our way of life. Real solutions will only arise through systemic changes according to Žižek.

Biological engineering, Žižek’s fourth topic, is one that is “interesting and dangerous.” The particular ability for “genetically manipulating physical and psychological properties of larger and larger numbers of people” strikes him as a near-term hazard. It is not the capacity to genetically alter physical and psychological properties, but the question of who controls the capacity that sounds the alarm for Žižek. “When governments and markets cannot be trusted and moral and legal systems of the past are incapable of countering such practices, who can navigate such dangerous waters?” he asks. Answering his own rhetorical question, Žižek declares that we must all take up the philosopher’s cloak and work through this risk rigorously, learnedly, and courageously.

Although his accent is thick and his tics abound, Žižek provides a provocative point of view worth considering. Not only does Žižek offer opinions “about”the topics of capitalism, climate change, biological engineering, and social inequities, but he also (and primarily) offers a perspective from which to view such topics. Žižek encourages us “to look at the forest.” He calls us to take a perspective that seeks to penetrate systems. Žižek does not encourage us to overlook and dismiss the individual, but he does challenge us to not lose sight of the collective, structural elements that frame our individual activities. There is little doubt that if one fires up the interview with Žižek, this Thanksgiving’s conversations will be savory.

“NOT WITH MY MONEY!”: Reflections on why nobody wants to pay for toilet paper

Navigating the Seas of Meaning in the Workplace