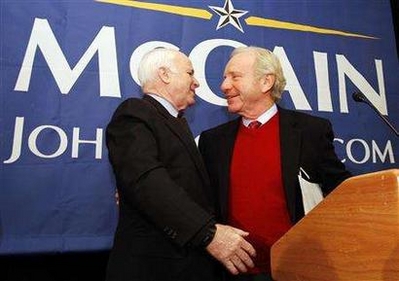 Rejected but not forgotten by Sen. McCain, pastor John Hegee of Christians United for Israel sat in the audience while Sen. Joseph Lieberman, former Democratic Vice-Presidential candidate and current ally of Sen. John McCain, heaped praise on Hegee and his organization.

For those unfamiliar with the narrative of Christian dispensationalism, the alliance between contemporary fundamentalists and some pro-Israel Jewish groups in the United States and Israel may seem odd, but for Sen. Lieberman and Pastor John Hagee the pragmatic alliance is increasingly important. Pastor Hagee supports the continued existence and expansion of Israel as a necessary condition for the return of Christ. Thus, many supporters of Israel find in Christians like Hagee fiercely loyal allies in their secular political maneuverings. The relationship between the pro-Israel lobby and fundamentalist dispensationalist Christians is even more important in an election year. Candidates and their surrogates, eager to court Jewish voters and the votes of the pro-Israel lobby can use public religious figures such as Pastor Hegee to send messages to potential voters about their intentions without necessarily outlining policy. In Lieberman’s case, his description of Pastor Hegee as a Moses figure stops just short of a theological endorsement, but sends a signal to Jewish voters and supporters of Israel that Sen. McCain is a staunch supporter of Israel and might support Israeli territorial expansion. Clearly the later position is not one Sen. McCain can publicly support – nor do we suggest that he privately supports this position – but by making a gesture of reconciliation with Hegee and his organization Sen. Lieberman courts Christian dispensationalists who long for the territorial expansion of Israel and the final advent of Christ in Jerusalem.

Read the article in the Hartford Courant.

Theology is Not Knowledge? On The Ethics of Being a Theologian

Do you have Bracket Fever?