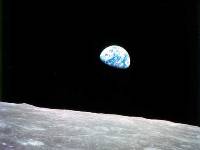 On December 24, 1968 Apollo 8 astronauts snapped the picture now known as “Earthrise.” Earthrise captures, for the first time in human history, the Earth rising over the lunar landscape. Upon first sight of this magnificent event astronaut Frank Borman said in quiet awe, “Oh my God! Look at that picture over there! Here’s the Earth coming up. Wow, is that pretty.” Once the photograph was released it became for many around the globe an iconic image representing both human solidarity and human frailty. Now, Forty-three years later, the opportunity to behold the grandeur of the Earth from space has been extended beyond supremely skilled astronauts to the outstandingly affluent.

The CBC reports that the private corporation Space Adventures Ltd. is partnering with the Federal Space Agency of the Russian Federation in order to send private citizens to the International Space Station. These space excursions last for approximately ten days; and, the cost? That has yet to be disclosed.

However, an idea of the price for such an otherworldly adventure may be determined by how much Guy Laliberté, the founder of the renowned Cirque du Soleil, paid for a visit to the space station. In 2009, Mr. Laliberté spent a handsome $35 million for an eight day experience of a lifetime. Commenting on his journey, Laliberté said it was “worth every penny and more.” He also indicated that he used the publicity surrounding the trip to draw attention to the world’s water problems.

The chairperson of Space Adventures Ltd., Eric Anderson, notes that “private individuals, organizations and commercial entities” have been expressing much interest in space travel since Laliberté’s trip in 2009. In order to meet this increasing demand, Space Adventures Ltd. has contracted with the Russian Federation for eight private flights over the next ten years.

For many of us, this short report by the CBC may remind us of the temptation of Jesus. When Jesus was tempted by the devil, the devil took him to “a very high mountain” in order to show him “all the kingdoms of the world and their glory” (Mt. 4:8, NASB). While upon the mount, gazing over the land, the devil then declared that he would give all that could be seen to Jesus if he would “fall down and worship” him (Mt. 4:9, NASB). In response, Jesus resoundingly rejected the lust of world domination and, consequently, having failed, the devil departed.

Of course it is possible that the temptation of world conquest may arise for any who gain such a vantage point similar to that experienced by Jesus, the Apollo 8 crew, and all the world’s astronauts. But, it is also possible that seeing Earth from space may, instead, generate a response like that of Jesus and Frank Borman’s. Such a privileged view can fire one’s marrow with awe. It can produce profound feelings of joy and gratitude for the bounty of the Earth. It can inspire a sense of responsibility toward and for its billions of inhabitants, both flora and fauna. Given the potency of such experiences of grandeur, may it not be a sound idea to encourage the leaders of the world to obtain for themselves the experience of Earthrise? May it be worth the risk of fostering within them the will of world domination for the potential gain of imbuing within them an overpowering sense of solidarity and love for the Earth that may then translate into their policy decisions? This may be an outlandish proposal, but why should we limit our contemplation? Reflecting upon ways of engendering solidarity, empathy, and love within others seems to be a common practice for many Liberal Evangelicals; therefore, let our contemplation soar!

To hear the audio and read the transcript of “Earthrise” from PBS American Experience click here.

To read “Space Station Excursions for Sale in 2013″by the CBC click here.

Part IV. We’re Different, and that’s OK – except when it’s not

The Struggle for America’s Soul: Evangelicals, Liberals, and Secularism, by Robert Wuthnow