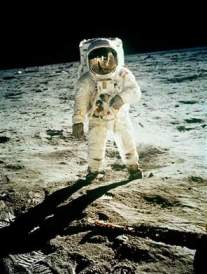 On July 20, 1969 something extraordinary occurred. For the first time in history a man walked on the moon. This event affected every nation, revolutionizing the way people see the earth and the value placed on science.

Though most are familiar with the famous phrase uttered by astronaut Neil Armstrong, some fear its significance has been forgotten. The phrase, “That’s one small step for a man; one giant leap for mankind,” ushered in a new era – a scientific era.

ANGOP International reports that landing on the moon “was seen as the high point of a U.S. space program fueled by a decade-long space race with the former Soviet Union.” The effort was initiated by President John F. Kennedy when he vowed in 1961 to put a man on the moon by the end of the decade.

The voyage to the moon included astronauts Armstrong, Buzz Aldrin, and Michael Collins (left), who navigated Apollo 11 on this historical mission – and there was no shortage of suspense for their audience back on earth.

When Apollo reached “the far side of the Moon,” the American astronauts lost communication with NASA, and the “Eagle moon lander separated from the Apollo command module,” reports ANGOP. Following this, the shuttle’s emergency “alarms went off, telling the astronauts that the automatic guidance system was steering the lander toward a boulder-strewn crater instead of a relatively flat landing site called the Sea of Tranquility.” Then “Armstrong took manual control of the guidance system and, with just 20 seconds of fuel remaining, coasted to a landing.” Fear of disaster from this close call ended when Armstrong’s voice broke radio silence: “Houston, Tranquility base here. The Eagle has landed.”

Then, cameras rolling, Armstrong “descended the steps of the landing module” not long after “touching down on the powdery lunar surface,” and he described the landscape, saying “It has a stark beauty all of its own…It’s much like the high desert of the United States. It’s different but it’s very pretty out here.”

U.S. President Nixon commented on the significance of this moment by telling the astronauts, “Because of what you have done, the heavens have become a part of man’s world. For one priceless moment in the whole history of man, all the people on this Earth are truly one, one in their pride in what you have done.”

American patriotism reached an all time high when U.S. astronauts planted an American flag on the moon – the first flag ever to stand on a surface beyond Earth. But the impact of this mission extended far beyond mere patriotism. Armstrong put his finger on one of its most profound psychological effects when he said, “The important achievement of Apollo was a demonstration that humanity is not forever chained to this planet, and our visions go rather further than that and our opportunities are unlimited.”

Celebrations of the 40th Anniversary of Apollo have called to memory its importance. Times Online reports the recent tribute paid to NASA astronauts like Armstrong, some of whom died for this defining moment in humanity’s progress.

National Air and Space Museum’s space policy expert John Logsdon echoed the importance of the freedom Apollo 11 represented for humanity when he said, “Apollo showed us that we don’t have to stay on this planet forever. It was the first step in a centuries-long process of moving humanity into the solar system – Apollo, when you look back, will be the first step in the evolution of humanity to a multi-planetary species.”

President Barack Obama relates the successful Apollo mission to the importance of scientific progress in general. Last spring he spoke at the National Academy of Science, discussing how scientific advances extend beyond mere space exploration. He said “The Apollo program itself produced technologies that have improved kidney dialysis and water purification systems; sensors to test for hazardous gasses; energy-saving building materials; and fire-resistant fabrics used by firefighters and soldiers … the benefits of which have been incalculable,” reports NASA.gov.

Obama also emphasized the value of scientific research as “essential for our prosperity, our security, our health, our environment, and our quality of life.” But he is worried that America no longer invests enough in this research. He encouraged a restored vision of its importance.

Just think what this will allow us to accomplish: solar cells as cheap as paint, and green buildings that produce all of the energy they consume; learning software as effective as a personal tutor; prosthetics so advanced that you could play the piano again; an expansion of the frontiers of human knowledge about ourselves and world the around us. We can do this.

Obama set a goal to devote “more than three percent of our GDP to research and development,” which he hopes will “exceed the level achieved at the height of the Space Race,” “create new incentives for private innovation, promote breakthroughs in energy and medicine, and improve education in math and science.” Admitting that this goal “represents the largest commitment to scientific research and innovation in American history,” Obama closed with a quote from President John F. Kennedy, who 45 years ago told the National Academy of Sciences, “The challenge, in short, may be our salvation.”

Given the importance that political and cultural leaders attach to this anniversary, it is surprising that religious news outlets have covered it as lightly as they have. What, we wonder, lies behind this? It seems that religious people sometimes look past civilization-changing events from the secular parts of life, imagining that God’s concerns lie elsewhere. Might it not be more appropriate to suppose that God works through every part of society, in ways we notice and in ways that escape our attention, in religions we know and in religions we don’t know? Surely God heals through developments in medical technology, protects through the invention of fire-proof fabrics, and supports the human project through education and research. It would make sense, then, that Christians who are willing to see God at work in every part of the world, without ever losing sight of the need for moral critique, would want to celebrate the 40th anniversary of Apollo 11.

Obama’s speech to the National Academy of Science

Boom! We’re back: and please don’t say it.