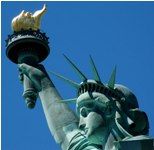 As Americans, we live in the “sweet land of liberty.” Whether citizens by birth or by naturalization, we have a rich appreciation for the principles of liberty upon which our nation was founded. We, as Americans, are fundamentally committed to democracy, the process of democracy, and the institutionalization of democracy. This fundamental commitment is accompanied by a fundamental recognition. This is the recognition that there is often disparity between the ideal of democracy and the practice of democracy. Democratic ideals may be written into our founding documents, but they do not automatically make their way into our streets, work spaces, public policies, and homes. Many of us strive to narrow the gap between ideal and practice, and we feel sorrow for the lives that have been and are being crushed by the weight of disparity. Amidst the sorrow felt for the suffering endured by our sisters and brothers, and amidst the struggle to extend democracy within our boarders, we still press on. Unfortunately, the struggle to realize the democratic ideal has become more strenuous in recent days.

On January 21st of this year the United States Supreme Court declared that individuals and corporations have equal standing and protection under the First Amendment. Under the First Amendment an individual’s right to freedom of speech is protected from federal, state, and local government restriction, and, now, on account of the Supreme Court ruling, corporations have been granted the same protection.

In the case of Citizens United v. Federal Election Commission the Supreme Court ruled 5-to-4 in favor of Citizens United. The case originated in 2008 during the Democratic presidential primaries when Citizens United attempted to air “Hillary: The Movie” on pay-per-view. According to the Christian Science Monitor and The New York Times, the producers of the film, Citizens United, is a “conservative” non-profit corporation. The Times describes the documentary as “a 90-minute stew of caustic political commentary.” At the time, the Federal Election Commission (FEC) determined that the documentary was “a form of electioneering that could be regulated under federal election laws,” and hence, the FEC regulated its distribution and advertisement.

In this fiercely debated 5-to-4 decision, the majority party consisting of Justices Kennedy, Roberts, Alito, Thomas, and Scalia concluded that the FEC had overstepped its bounds. Justice Kennedy, speaking for the majority, proclaimed”When government seeks to use its full power, including the criminal law, to command where a person may get his or her information or what distrusted source he or she may not hear, it uses censorship to control thought. This is unlawful. The First Amendment confirms the freedom to think for ourselves.”

According to the Times, Justice Stevens perceived that “the majority had committed a grave error in treating corporate speech the same as that of human beings.” Stevens was joined in dissent by Justices Breyer, Ginsburg, and Sotomayer.

There are two more restrictions of note coming from the case, both of which revolve around disclosure. As the Monitor records, first, “Any corporation spending more than $10,000 a year on electioneering efforts must publicly disclose the names of individual contributors.” And, second, “When corporations place a political ad on television or radio within 30 days of a primary or 60 days of a general election, it must include the disclaimer: ‘______ is responsible for the content of this advertising.'”

The Monitor foresees that the effects of this judicial decision will ripple through state laws. States laws that conflict with the federal decision must now be amended or repealed. In addition, the Monitor predicts that corporations will route their political funding “through trade associations and nonprofit groups” in order to create distance between their corporate identity and their “partisan position[s].”\

What could go wrong if the Supreme Court’s minority in this case were to witness their worst fears realized?

By granting individuals and corporations equal standing under the First Amendment, a great inequality is being formally introduced into judicial precedent. This inequality becomes apparent when considering the colossal difference between individual income and corporate income that could be marshaled for publicizing political views. Consider the following:

In 2009, the following corporations posted these gross profits:*

When compared, these findings are striking. In one year, Exxon Mobil posted gross profits that were almost four times the net worth of America’s richest individual. If Bill Gates had spent all of his financial worth on political advertising in 2009, he would have been seriously outmatched by an Exxon Mobil spending all of its annual profit in a similar fashion.

Many American citizens believe that this Supreme Court ruling poses a potent threat to the democratic process. Americans who also identify as religious may have special concerns. Democracy protects the right of individuals to hold diverse religious opinions, practice religious beliefs, assemble on behalf of religious beliefs, and publically express religious views. Democracy promotes toleration as it allows an array of diverse viewpoints to be heard and to be publically and privately debated. Democracy allows religious people to publically mobilize programs aimed at alleviating social inequities. Democracy restricts governmental and non-governmental bodies from interfering in these expressions, except in extreme cases. As long as the interests and opinions of the most powerful corporations align with these democratic protections, the realization of the potential threat may be minimal. However, if their interests and opinions diverge from democratic principles, the threat becomes quite real.

Measuring the response from “liberal,” “conservative,” and “libertarian” political commentators, the Monitor finds that liberals who have been working toward election reform see the Supreme Court’s decision as a momentous setback. “If American democracy is based on the principle of one person, one vote,” the liberal commentators argue, “then corporations must be muzzled during political campaigns to prevent their amassed wealth from dominating and corrupting a political campaign.”

Commentators from the conservative and libertarian standpoint disagree. They see the decision as a great stride toward protecting democracy. From their vantage point, “limiting the amount of money a corporation – or anyone – can spend to make their political point is censorship and a violation of the letter and spirit of the First Amendment’s guarantee of free speech.” Additionally, “Corporate power and influence aren’t inherently corrupting; as long as they’re part of a vibrant debate within an open marketplace of ideas.”

When the capacity to deploy nearly limitless funds toward buying and controlling media avenues is combined with the power of advertizing to manufacture public opinion, the corporate impact on the elections of policy makers could be substantial. If, given these conditions, religious freedom fell out of favor with corporate magnates, and, consequently, their subsidized policy makers in elected office, it would not be beyond the pale of reason to see how religious freedom could be curtailed. Thus the concern for democratic process extends naturally to a concern for religious freedom.

*Corporate earnings are rounded down to the nearest billion and may be found through Yahoo Finance under the “Key Statistics”link for each company.

**These figures, derived from Forbes.Com, have been rounded down to the nearest billion and may be found by clicking here.