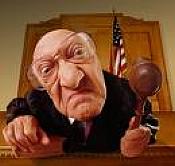 The website Radical Faith: Exploring fundamentals of faith in a changed world has reposted an article on “Paedophiles and Priests, Carnality and Clerics” (originally posted at dechurched.com). Written by Bryan Winters and employing the old-fashioned spelling for “pedophile,” this article discusses the way in which the abuse of power by clergy, specifically with regard to sexual offenses, warrants a rethinking of “whether or not we are justified in elevating Ministers and Priests into positions of power in the first place” (the amusing picture accompanying the article is at right).

Winters discusses “one of the issues facing modern Christianity” as the problem of churches abusing their power. One such abuse involves Churches defending pedophile priests. He suggests that “clerical councils around the world” try to pull the wool over the eyes of “today’s wired, wavering, low attention span” population through various “clean up campaign[s]” that cover for clerics and church leaders.

Winters exposes ways Church authorities avoid just retribution with clever schemes. The “evangelical and charismatic” congregations dissuade the public eye from problematic pastoral behavior by appealing to “spiritual root causes” designed by “Satan,” who “tempts many pastors and clerics with sexual sin;” notes Winters. In response to this he says, “You better be careful with that line. Anyone could go out, spend a night in a bordello, and then say they were the subject of above average temptation – which proves they must be spiritually important.”

The victims of abuse dispersed by ‘carnal clerics’ are sensitively addressed by Winters. He laments that “lives, young lives, get blighted and families and beliefs are ruined” because of pedophiles in the ministry – “It is heartbreaking.”

But Winters does not think this warrants bastardization of these “perpetrators” by the church. Instead he offers a “plug for mercy” to his readers. He says that common reactions to clergy accused of pedophilia include actions tantamount to “distancing our good souls from their evil ones;” and this is in opposition to what Jesus Christ taught.

Power and authority are what lie beneath the surface of clerical abuse and of many problems for churches in general. In his view the problem of power and authority in the church looks something like this: “People in power abuse their authority, and power applied to sex = abuse; Jesus had no power, but the Church seeks it. And what happens when you have power? – you abuse it. As long as the institutional church supports its power structures, as long as the Pastor up front asks people to submit to him, misuse of power will occur. As long as the Pastor insists on being called ‘Pastor Mike’ he is supporting the use of power in a church setting. Yet we all claim to follow one who didn’t use worldly power.

Winters article addresses other topics, but the question of power in the church is one that warrants careful consideration. In particular, he raises a profound question for all churches. How should the social reality of power in church groups be reconciled with the vision of church community that turns away from power in the name of a powerless – indeed, a tortured and murdered – founder?

The website Radical Faith: Exploring fundamentals of faith in a changed world

Winters’ article on Pedophiles and Priests, Carnality and Clerics

A Secular Age, by Charles Taylor

Chapter 08: Morality and the Liberal-Conservative Conflict

Theology is Not Knowledge? On The Ethics of Being a Theologian