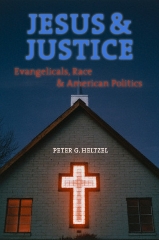 Peter Heltzel, assistant professor of theology at New York Theological Seminary and ordained Disciples of Christ minister, has written a book on the relationship between evangelicalism and American politics, and how that relationship is changing. Jesus and Justice: Evangelicals, Race, and American Politics is a must read for ministers, seminary students, and lay persons who desire to engage important issues of our day.

This book discusses evangelical social movements such as Focus on the Family, the National Association of Evangelicals, Christian Community Development Association, and Sojourners. Heltzel investigates the way in which evangelical understandings of Jesus Christ drive their political action. Tracing the influence of Dr. Martin Luther King, Jr., Carl F. H. Henry, and others, Heltzel shows how their impact has culminated in a new prophetic evangelicalism.

Crowned with a forward by Mark Noll – a highly respected scholar of the history of evangelicalism in America – this book amounts to a manifesto on behalf of the positive, prophetic contribution of evangelical Christian faith to American culture and politics.

Importantly, this resource is practically relevant. Heltzel offers a goal towards which liberal-evangelical moderates can strive, and a vision that Christ-centered, radically inclusive moderates can embrace. The following except explains this relevance.

Charles Marsh, author of The Beloved Community: How Faith Shapes Social Justice, From the Civil Rights Movement to Today, says “with this head-turning first book, Peter Heltzel emerges as the most provocative new interpreter of American evangelicalism: Jesus and Justice will change the way we think about Christianity and politics.”

Randall Balmer, author of The Making of Evangelicalism: From Revivalism to Politics and Beyond, says that Heltzel “offers an informed, passionate critique of evangelical political involvement. This important book will very likely alter the terms of the debate over evangelicalism and politics.”

Catherine Keller, author of God and Power: Counter-Apocalyptic Journeys, says “this book bursts onto the scene just as the blue and red map begins to break up both in politics and in religion.” And J. Kameron Carter, author of Race: A Theological Account, says “Heltzel offers a genealogy of American evangelicalism that casts important light on its complicated relationship to American politics and America’s painful history of race relations. American evangelicalism is positioned inside of, and not apart from, such matters. This alone merits a serious consideration of Heltzel’s work.”

Pick up a copy of this important resource and use it to stimulate conversations in your church community.