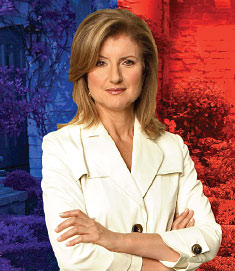 Liberal-Evangelical moderate Christians are all too familiar with the “left versus right” way of thinking. Often ecclesiological and political debates among Christians are assessed in these terms. But as moderate, Christ-centered, radically inclusive Christians, polarizing labels are often frustrating. Perhaps an alternative to left-right thinking is possible.

Reporter Arianna Huffington of the Dallas Morning News has written a series of articles wherein she suggests such an alternative. She claims that a new revolution in thinking is underway. Huffington thinks that, in the arena of political differences, the U.S. culture at large no longer thinks in right versus left categories. Rather, she argues, we now think in terms of right versus wrong.

In her article, “Will gay marriage end left vs. right?” Huffington argues that gay marriage is the latest political issue wherein the new right-wrong thought pattern is evident.

Huffington understands gay marriage as having traditionally been “a dependable wedge issue Republicans could use to keep its base in line.” But this is no longer the case, she says. Citing Dick Cheney as supporting gay marriage “as long as it’s sanctioned at the state level,” Huffington thinks this indicates a right-wrong over right-left revolution.

Huffington also mentions the “strange-bedfellows pairing of Ted Olson and David Boies… The Bush vs. Gore adversaries” who have found common cause fighting for gay marriage through a federal lawsuit. In a recent interview, Olson and Boies explained to Larry King that, “this isn’t a Republican or a Democrat issue. It’s not a liberal or a conservative issue.” Further, because “a number of traditionally progressive groups” do not support the lawsuit because of its timing rather than its content, this is further evidence for left-right thinking evolving into right-wrong thinking.

For Huffington, “The seismic shifts in our society have rendered right vs. left thinking as archaic as a flat earth map.”

Whether or not Huntington’s claims are persuasive, liberal-evangelicals may benefit from pondering the question that she raises, especially in disagreements with other Christians. Perhaps foregoing the rhetoric that stigmatizes opponents as left or right could make disagreements easier to manage.

Replacing left-right with right-wrong may not work in every case, but there may still be value in losing the left-right category when trying to navigate morally loaded disagreements.

An interview with Huffington on this issue

A clip from the Olson-Boies Larry King interview