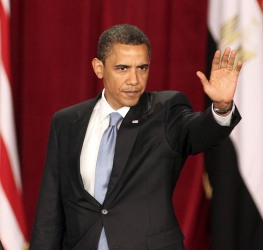 On Thursday, June 4, 2009, President Barack Obama gave a landmark speech in Cairo, Egypt (right). Obama’s stated purpose was to “seek a new beginning” for “the United States and Muslims around the world.”

Obama discussed seven issues that are sources of tension.

Following his discussion of these issues, Obama said,

The issues that I have described will not be easy to address. But we have a responsibility to join together on behalf of the world we seek – a world where extremists no longer threaten our people, and American troops have come home; a world where Israelis and Palestinians are each secure in a state of their own, and nuclear energy is used for peaceful purposes; a world where governments serve their citizens, and the rights of all God’s children are respected. Those are mutual interests. That is the world we seek. But we can only achieve it together.

There is no shortage of media reaction to Obama’s Cairo speech. International media sources confirm that the speech was closely watched around the world and very closely studied. Two representative opinions are Spiegel Online International, which took a mostly optimistic view of the speech as encouraging peace, and the Tehran Times, which interpreted the speech as propagating extremism against Muslim tradition.

The article points out that “expectations were huge” and that Obama “did his best to deliver, trying to reverse years of animosity between the United States and Muslims across the globe.” But it is not at all obvious what will come of the speech.

Spiegel notes that most U.S. citizens are relieved to hear a steadier presidential voice “after years of ‘us-versus-them’ rhetoric coming from the White House of Obama’s predecessor, George W. Bush.” Europe is reacting positively, as well. German Chancellor Angela Merkel endorsed the speech, saying that it “opened doors to the Arab world” and that “with the new American government and the president, there is a truly unique opportunity to revive this peace process.”

Members of the EU (European Union) also reacted positively to the speech. EU foreign policy Chief Javier Solana said, “I think we – the EU, the US and the countries of the region – can begin to solve many problems we are confronted with in the Middle East.” However, reactions from some, such as Israel’s Prime Minister Benjamin Netanyahu, were not as glowingly positive.

The Spiegel article also noted that some right-wing German media reactions took a negative view of specific points in the speech. For example, Obama’s attempt to identify with the Islamic world by discussing his youth in Indonesia and by including “carefully selected citations from the Koran” was not universally appreciated.

Spiegel also reported that Germany’s left-wing media viewed Obama as having “deftly defended the US operation in Afghanistan” and “elegantly skirted the issue of Iran.” Conversely, German right-wing media complained that “Obama went farther than any previous US president in distancing himself from Israel’s policy of occupation.”

One point of agreement from both left and right international media is that speeches are secondary to changes in international relations.

Reporter Paul Craig Roberts, of Iran’s The Tehran Times, has a strong response to Obama’s speech. Posing the question, “What are we to make of Obama’s speech at Cairo University in Egypt?” Roberts critiques the speech as “explosive, idealistic rhetoric” that reveals an underlying support for “America’s violent extremism.”

Roberts’ supports his claim that Obama is an extremist by pointing to the U.S. President’s “explosive words” about “Israel and Palestine: ‘Israelis must acknowledge that just as Israel’s right to exist cannot be denied, neither can Palestine’s. The United States does not accept the legitimacy of continued Israeli settlements.'”

Roberts thinks that Obama’s plan is unreasonable: “Israel would have to give back the stolen West Bank lands, dismantle the wall, accept the right to return, and release 1.5 million Palestinians from the Gaza Ghetto” and these are unlikely events. Therefore, Roberts fears the result of Obama’s speech will be no more than empty rhetoric designed to flatter Muslims.

Roberts is further disturbed by what he feels is a masking of extremist American aggression in the Middle East. For example, the war in Afghanistan is heralded as a “war of necessity.” But “Obama’s case for America’s violent extremism in Afghanistan and now Pakistan is hypocritical,” he says, because the motive for these is “America’s desire for military bases and hegemony.”

Roberts also complains that Obama blames Al-Qaeda because they “chose to ruthlessly murder nearly 3,000 people on 9/11.” But “these deaths are a mere drop in the buckets of blood that America’s invasions have brought to the Muslim world – the overwhelming majority of the Muslims America has slaughtered are civilians, just as are the unarmed Palestinians slaughtered by the American-equipped Israeli military,” he laments.

Robert’s closes by offering his overall interpretation of Obama’s Cairo speech “What Obama has really done in his speech is to accept responsibility for the neoconservative agenda of extending Western hegemony by eliminating “Muslim extremists,” that is, Muslims who want to rule themselves in keeping with Islam, not in keeping with some secularized, Westernized faux Islam. Muslim extremists are the creation of decades of Western colonization and secularization. Obama said that “human progress cannot be denied,” and “there need not be contradiction between development and tradition.” However, the West defines development and education. These terms mean what they mean in the West. Muslim extremists understand that these terms mean the extermination of Islam.

Reaction to the speech in the Muslim world was generally significantly more positive than Roberts’ article would suggest. Nevertheless, the view expressed in The Tehran Times is not a rare outlier view in the Middle East and thus is an important perspective for westerners to absorb. This view, which interprets American foreign policy as extremist because of the impact of US military action on civilians, is too rarely heard in western media outlets and virtually never broached in Christian churches.

Nevertheless, the general consensus world-wide in the media appears to be that Obama’s Cairo speech defines an important opening for improving and potentially reconceiving the relationship between the US and the Muslim world. Time will tell whether the words can translate into new patterns of thinking and behavior.

A Deficiency Worth Rectifying

The Struggle for America’s Soul: Evangelicals, Liberals, and Secularism, by Robert Wuthnow