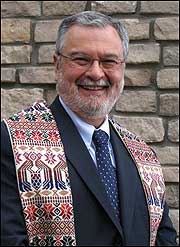 On June 27, 2009, Rev. Peter Morales was elected the eighth president of the Unitarian Universalist Association (UUA). Having wrapped up his recent campaign, the organization’s new leader is now gearing up to implement the vision that won him the office. But what is his vision?

As the leader of the most liberal denomination in America, questions about Morales’ vision, and where he stands on the right-left spectrum, are not without consequence. Unlike many in the UUA, Morales is comfortable using the word “evangelical” in the classic sense of someone committed to the good news. Is Morales a liberal-evangelical moderate in a liberal religious organization?

Morales’ vision for the UUA seems to imply a moderate middle perspective. He wants to “reach all those people who are looking for a non-dogmatic, liberal religious community.” He also wants to partner with “other progressive and justice-seeking religious groups.”

On his website “Morales for UUA President,” the new president clearly states his vision and convictions. He says it is not his vision, but the UUA’s “shared vision of what is possible” that motivates him. This vision involves being “passionately engaged in the great moral issues of our time: economic justice, peace, and human rights.”

One of Morales’ more vocal convictions is that fundamentalism is “dangerous” and needs to be addressed. This is clear in his sermon, “The End of Faith,” in which he laments fundamentalism, especially modern Christian fundamentalism in America:

Goofballs like Robertson are a worse temptation than a bag full of organic blue corn tortilla chips. I just can’t resist ridiculing such silly beliefs. Yet I should resist. Televangelists like Robertson, Falwell and their ilk have gotten so nutty that there isn’t even much sport in poking fun at them. Sadly, they are the tip of an immense iceberg of ludicrous religious beliefs. Almost half of Americans say they believe in the literal story of creation given in Genesis (never mind that there are actually two quite distinct creation myths in Genesis). Tens of millions of our neighbors believe they will be whisked up to heaven in the rapture. Four out of five Americans believe that Jesus is going to return. One out of five Americans believe that Jesus will return in their lifetime.

Morales is horrified that fundamentalism uses faith to “justify and motivate horrific violence,” which is a “theme throughout human history.” In this sermon Morales holds that fundamentalism, “especially the pervasive right wing evangelical variety, is not just wrong, it’s dangerous.”

Morales’ vision and convictions call for an “end” to fundamentalism and beginning of a faith that “builds upon the great teachings about compassion, community and commitment that is the core of Judaism, Christianity, Islam, and Buddhism.”

Tom Stites is a former campaign communications director for Morales. Answering LE.org’s questions about Morales’ vision and convictions, he speaks from his own experience and opinions, and not as a spokesman for Rev. Morales or for the UUA.”

Stites sees Morales’ election as “as significant inflection point” for the UUA, which has experienced an “essentially static” membership over the past twenty years. Stites’ claim is based on Morales’ vision, which is focused on “growth in spirit, vitality, diversity – and numbers.”

Stites hopes this new vision will reach “hundreds of thousands of people who identify as UU” but are not involved in congregations and also “millions who resonate with UU values.” He also notes Morales’ deep commitment to “cut across class lines,” and usher in “much broader, multicultural population.” Importantly, Stites says that Morales puts “greater emphasis on this than the broad UU culture traditionally has.”

In the first 90 days of his tenure, Stites thinks Morales will pursue two primary goals: “getting a grip on” the financial and administrative elements of the UUA and “creating a sense of urgency about reaching out.”

Stites believes that Morales’ vision and convictions are welcome and will be supported by the UUA.

Rev. Morales sermon, “The End of Faith,” regarding the end of fundamentalism