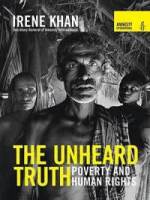 Irene Khan, Secretary General for Amnesty International, is encouraging world leaders to think about poverty from a new perspective. In her new book The Unheard Truth: Poverty and Human Rights Khan argues that the solution to poverty in the world lies in the establishment of human rights for the impoverished instead of solely focusing on improving their economic condition. Improved economic conditions like the construction of health facilities and schools and higher crop yields are beneficial, but are not enough to eradicate poverty.

“Discrimination, state repression, corruption, insecurity and violence are as much defining features of poverty as the lack of material resources,” states Khan in the article “The Unheard Truth: World Leaders Must Change Debate on Poverty and Human Rights.” In order to effectively confront and transform the worldwide crisis of poverty both features fueling poverty must be addressed since they are interrelated.

By turning attention to human rights the structural feature fueling poverty can be challenged. Ensuring that people have access to information, that people are consulted about legislation, that people have a forum for their opinions, and that their opinions are heard and considered will combat these structural forces. Khan declares, “Any successful poverty alleviation strategy must empower the poor to claim their rights, so that they can control their destiny and can hold decision makers to account.” Once their rights are acknowledged, the poor will have a political voice. Through this voice, they will be able to help determine the allocation of resources that can begin to alleviate the material impoverishment they face.

The old perspective that targets material conditions is ineffective because it fails to address the structural aspects of poverty. Khan observes, “There can be no sequenced or partial approach to human rights if we want to solve poverty. Demanding participation rights is as important as directing resources to meet basic needs for food, health and shelter. Protecting people against violence is as crucial as ending discrimination. Reducing maternal mortality calls for better health care but also for the improvement of the status of women.” Through a change in perspective, by penetrating more deeply into the problem, Khan believes that poverty can be relieved.