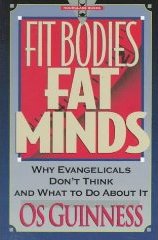 Ever wonder why some of the more conservative-evangelical Christians tend to dismiss reasonable questions about their faith, make statements such as “The Bible says it, I believe it, that settles it!”, or presuppose a theocratic ideal in a democratic government (i.e. the USA)? Many other such characterizations of the evangelical attitude could be mentioned, but getting to its core is the task undertaken by Os Guiness in Fit Bodies Fat Minds.

As an evangelical, Guinness is in a unique position to write this book. All too familiar with the evangelical perspective, he critiques his own camp. This book is written with the goal of reforming the way in which Christians think (c.f. 11). Guinness introduces his message in two ways. First, he will point out the problem of evangelical anti-intellectualism, which he defines as “a disposition to discount the importance of truth and the life of the mind” (9). Second, he will argue that anti-intellectualism is a sin which must be addressed: “we evangelicals need to examine our anti-intellectualism, confess its pervasiveness, repent of its wrongness, and seek God’s restoration to live up to our name- truly being people of the gospel who love God not only with our hearts, souls, and strength, but also with our minds” (11). The problem Guinness posits is that American evangelicals are more concerned with their abs and cardio than with the development of their minds. Tracing the development of anti-intellectualism in two parts: I, “A Ghost Mind”; and II, “An Idiot Culture”; Part III, “Let My People Think”, offers solutions to this problem. I will now summarize Guinness’ argument.

Through eight chapters, Part I traces the ideological history (from roughly 1700 to the Civil War) which has led to the current anti-intellectualism under discussion. Here Guinness wants to show how the intellectually superior Puritan Mind (which he claims founded this nation) has been abandoned. Just as the Gold Rush yielded ghost towns left by their former inhabitants (who followed their sensual impulses monetary gain), so too the sensual pull towards the body and away from the mind has left modern evangelicalism with a Ghost Mind. Eight chapters detail eight contributing factors (all beginning with the letter “P”) towards this movement.

First, the polarization of truth was “the first influence that helped to undermine what was left of the Puritan mind and leave its mark on evangelicalism” (28). This factor is characterized by “false antagonisms” and “either/or” thinking (e.g. heart versus head), which embraces one side of truth to the detriment of the other (29-30). Second, pietism (though potentially a good thing) has been problematic via its emphasis on subjective experience over objective liturgical grounds as the primary criterion for faith and practice. Third and fourth, primitivism has encouraged a simplistic world-view, and populism has turned trust away from “educated leadership and put a boundless trust in the common person”; leading to a “lack of respect for theology and a disengagement from serious discussion of truth” (46, 47). Fifth, pluralism has negated creeds and resulted in an attitude of uncritical tolerance, hoping to “give no offense to others [though having] no convictions of its own” (52). Sixth, pragmatism has led to the preponderance of the “prosperity doctrines or the ‘health and wealth gospel'” (56). This is juxtaposed with the Puritanical divorce of self from world, which (wrongly) evolved into a utilitarian conception of Christian behavior. Pragmatism led to three further attitudes: the devaluation of theology, “what mattered was that [theology] worked, not that it was true”, the rise of “self-help and positivistic thinking”, and the focus on method while forgetting miracle in missions and evangelism, culminating in an emphasis on “Will it work?” over “Is it true?” (57, 59). Seventh, philistinism (an attitude either ignorant of or “openly disdainful of intellectual or artistic values”) began to permeate American-evangelicalism (60). Examples of philistinism are found in Billy Sunday (“When the word of God says one thing and scholarship says another, scholarship can go to hell”) and Charles Finney (“I cannot believe,” he once declared, “that a person who has ever know the love of God can relish a secular novel: Byron, Scott, Shakespeare [are] triflers and blasphemers of God.” 61-2). Last, premillenialism (“the belief that the present age of human history will end in Christ’s thousand-year reign on earth” heralded by a series of signs marking the arrival of “the end of times”) became the dominate eschatological belief (63). Here evangelicals try to pinpoint an anti-Christ, and rashly apply Bible prophecies to current events. In addition, dispensational premillenialism disengages with culture and erects anti-intellectual positions: it is a form of the earlier false polarization and shrunken pietism reinforced by a distracting preoccupation with the end times. The roots of the problem, as ever, are theological. Dispensationalists at the popular level tend to overlook creation as they emphasize salvation, the lordship of Christ for the cross, common grace for special grace, the visible present for the invisible future, and the normal everyday for the dramatic and the apocalyptic. (66-7)

Part II discusses the post Civil War to present day “dumbing down” of the American “mass mind”, which has culminated in “the creation of an idiot culture”(71). Two primary factors are given for this assertion. Knowledge has fallen prey to the “specialization” of its content and the “universalization” of its transmission (ibid). The level of knowledge among the populous is argued to be much lower than in past ages, erecting a great chasm between the specialized theologian and the populous; “The ability to read is widespread, but the inability to read any but the shallowest texts is equally widespread” (72). Further, this chasm has affected the church: “With the Christian highbrow higher and more abstruse and irrelevant than ever and the Christian lowbrow lower and more vulgar and adolescent than ever, the body of Christ often gives the appearance of the uncontrolled movements of a paraplegic” (I presume this highly insensitive metaphor of a “paraplegic” is used to express a breech in the neural transmission between brain and body, ibid). Guinness next warns the highbrow camp of the danger of elitist pride, and proposes to bridge the chasm. Thus part II surveys the rise of a technological, image driven, entertainment addicted, television watching rather than book reading, American Idiot Culture. Quoting Neil Postman, Guinness drives home this point: “In courtrooms, classrooms, operating rooms, board rooms, churches, and even airplanes, Americans no longer talk to each other, they entertain each other. They do not exchange ideas; they exchange images. They do not argue with propositions; they argue with good looks, celebrities, and commercials” (78). Television, advertisement, the idealization of muscle-men and “anorexic” women, love for style, the inundation of words and the influence of postmodernism, have led to An Idiot Culture. This characterization applies also to American evangelicalism.

My response to this book is mixed. Myself a former conservative evangelical, I find Guinness’ assessment of evangelicalism accurate and potentially helpful for those in his camp. However, there are some elements of the book I find problematic. I will mention only four. First, Part I traces the way in which Christianity left the Puritan mind, holding Puritan thought as something of an ideal. But what was so great about the Puritan mind? Emotionalistic revivals designed to terrify people of hell and the devil, coupled with coercive admonitions against drinking, cursing and dancing? Why does Guinness idealize Puritanism? Certainly he emphasizes its value on education. However, Jonathan Edwards (whom Guinness mentions as a leading Puritan) though no doubt a robust intellectual is most famous for his hell fire and brimstone sermons and his obsessive compulsive behavior. Second, the call towards a Christ-like mind runs throughout this book. But what does this mean? This kind of terminology encourages an insider versus outsider attitude – which is one of the greatest turn offs to non-Christians. Third, Guinness sometimes goes too far in his analysis of American culture. For example, he complains that people wear cross necklaces for fashion, asserting this to be “an everyday example of the devouring character of late twentieth-century popular postmodernism at its most banal-and insidious” (102). But what is so horribly wrong with wearing a cross-necklace? Further, Guinness attacks Madonna (the pop-singer), asserting that “there is no limit to what she will say, do, wear, mock, promote, degrade- all to draw attention to herself and sell her soul along with her latest image and product – Madonna as a High Priestess of PoMo [i.e. postmodernism] is the epitome of popular postmodernism, including its devouring attitude to truth, goodness, and beauty” (102-03). Is this scathing caricature of Madonna really necessary? Fourth, Guinness rails against optimistic/positivistic thinking because it implies “beneficial results” (57). But who would deny this? Try getting out of bed every morning for a week with a negative attitude. Then, try the same with an optimistic attitude. Surely anybody knows that the latter is more likely to yield “beneficial results” than the former! Though this book does offer helpful insights and may reach some evangelicals, its abrasiveness towards that which falls outside of the esoteric Christian-Puritan mind only reinforces the often dismissive and self-righteous evangelical attitude.

Sympathy and Understanding for Conservatives