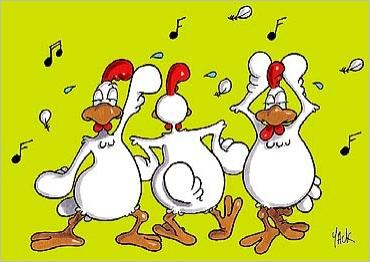 Break is over and it’s back to the grind here in the frozen north. Classes are beginning, the ice remains, and the relative absurdity of so much of evangelical culture in the U.S of A. persists: especially when viewed from another country. I’m writing, of course, about the newest poultry themed conservative evangelical obsession: the Chick-Fil-A day in support of Duck Dynasty. Now frankly the story is just too absurd even for me, and this is coming from someone who revels in obscure Micheal Keaton references, so I recommend that you look quickly at the following story from the folks at NPR. Check back with me when you’ve gotten the gist and no cheating…

… So there we have it, the end of Western Civilization must be nigh. But the silliness hides a serious issue, and it is that more serious issue that I want to address from a Liberal Evangelical perspective: the very idea of free speech and free religion and the all to common, though not entirely new, strategy of justifying bigotry and hate under the guise of free speech. So let’s state the matter clearly up front and then take the time to unpack the relevant issues.

Free speech i.e. the First Amendment to the U.S. Constitution protects the rights of a citizen to say just about anything so long as the words themselves do not cause immediate harm; yelling “Fire” in a crowded theatre and slander being two of the famous exceptions carved out by various Supreme Court decisions. The right to say something stupid or bigoted, however, does not protect the speaker from having his or her views challenged. In other words, the right to say X does not necessarily mean that 1) X is true simply because it is stated or 2) that X cannot be challenged by others exercising their own free speech rights. If someone states that all Kentuckians – to choose an example that strikes close to home for me – are hicks, I am in no way violating that person’s first amendment rights when I call their statement false and accuse them of prejudice. Nor would they be violating mine if they offer up the witty retort, “Well of course you’d say that, you’re from Kentucky!

So, as you see, I have no problem with the move to eat chicken in support of a “reality” show character. This is a perfectly legitimate, though odd, show of solidarity in the tradition of American protest, though most protests do not dovetail so nicely with the interests of a particular corporation. No. My problem is with the particularly insidious rhetorical move to take the act of challenging the veracity of someone’s claim and to equate that act with some kind of governmental clamp down on free speech. This rhetorical move ought especially to trouble Liberal Evangelicals because it strikes at the very core of our witness to the power of the Gospel to transcend difference and create communities across traditional racial, linguistic, political and denominational divides.

Again, I’ll state the matter as simply as I can. When two parties disagree about any issue no matter how superficial (Brady vs. Manning) or profound (the full humanity of women) the very act of sharing that disagreement openly contributes to solving the dispute. Reconciliation, by definition, is only possible between disparate positions and aggrieved parties and it cannot occur when the stating and noting differences is treated as an illegitimate violation of someone’s right to free expression. In other words, one of the key moments in any story of reconciliation is the moment in which both parties are able to freely share their understanding of the truth as they see it. This is one of the great lessons of the Truth and Reconciliation commissions that Mandela helped establish at the end of apartheid in South Africa and it is one of the deep commitments of the Liberal Evangelical spirit. We are called to live together with difference and to work to transcend those differences as one Body of Christ, but there must first and always be an honest accounting. Again, there is no reconciliation without difference and the open sharing of those differences.

The problem I have with the Poultry Party – what a perfect term for Duck Dynasty watchers who agree to gather and eat chicken in support of homophobia – is not that it is honest about it’s anti-gay views. I’m a robust supporter of such honesty since unexpressed and perhaps even repressed prejudices are more insidious than those that are stated openly. Rather, the problem with the Poultry Party is that much of its public rhetoric treats the act of disagreement as an act of repression or despotism. As if having and stating a divergent opinion were itself an act of tyranny. “You can have your opinion,” they seem to say, “so long as your opinion is not about my opinion.” Note, please, the practical social consequences of this kind of rhetoric. It is designed to prevent the kind of open sharing of ideas that may eventually lead to altered minds and hearts. It is designed to keep folks in their various camps and to preserve boundaries. It is designed to equate disagreement and its open sharing with political oppression and this has two sinister effects. First, it turns anyone who disagrees with you into an enemy rather than simply a debate partner. Second, it eliminates the possibility of reconciliation by delegitimizing the first and most necessary step, the honest sharing of divergent opinions. And quite frankly conservatives ought to recognize this since it’s the very thing that they have been calling “political correctness” for the past several decades when they see liberals doing it. Such a stance is neither Liberal or in keeping with the best of the Evangelical tradition.

A final moment of honesty…

Many of us who where raised in Evangelical homes and churches know that there are millions of genuinely caring Evangelicals out there who retain a keen sense of the wrongness of homosexuality. I grew up with many such folks and still love many such folks. So most Liberal Evangelicals will not be able to write off anyone who dislikes homosexuality as easily as other Liberals who’ve never known or loved people with these deep misgivings. This leaves us with a keen responsibility vis-a-vis events and groups like the Poultry Party. We must be the bridge toward reconciliation because partisans on both sides seem hell-bent on not allowing the other side so much as the space to state their positions honestly. Put simply, I’d much rather know someone’s deep prejudices so that we can discuss them openly than have those prejudices hidden away where they might fester. Reconciliation (the real kind, not the faux reconciliation that works to straighten out gay people) can only happen when honest talks happen and these cannot happen when such conversations are shut down prematurely in the name of “free speech.”

So eat as much chicken as you want, but don’t for a minute think that a blow is being stuck on behalf of free speech. Free speech supports a person’s right to say ignorant and bigoted things, but availing oneself of such speech does not make anyone a patriot, it simply outs them as a bigots.