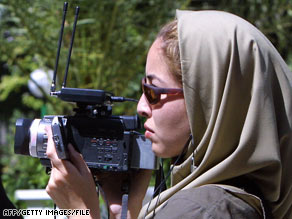 Protesters in the streets are not the only topic of international attention on Iran these days. What many claim is religious persecution – of non-Muslims – has hit the headlines. For over a year now, seven Baha’i leaders have been imprisoned in Iran. Sources insist that the reason is solely based on their religious beliefs. Set for trial and facing the death penalty, the prisoners wait. But the world is responding.

On July 9, 2009 the United States Commission on International Religious Freedom (USCIRF) issued a demand for the release of these prisoners awaiting trial. Calling the trial “theocratically supported repression,” the USCIRF considers this a matter of urgency. And they credit Iranian-American journalist Roxana Saberi (pictured at right) for bringing this situation to their attention.

After spending nearly four months in an Iranian prison cell Saberi crafted a letter “requesting U.S. government intervention in the Baha’i case.” Her plea, that “the Iranian people’s human rights are a matter of international concern,” motivated the call for release of the Baha’i prisoners.

The USCIRF.gov press release states that Iran is charging the seven Baha’is with “spying for Israel and other religious offenses.” USCIRF chairperson Leonard Leo thinks this situation is related to agitation in the wake of the country’s recent election crisis. He cites Iranian senior cleric Ayatollah Ahmad Khatami, who says “election demonstrators should be convicted and sentenced to death for waging war against God.” In response Mr. Leo has urged President Obama and other international leaders to “speak out and call for the release”of these prisoners who “are in jail solely because of their religious identity.”

Though Miss Saberi was released after “international outcry, including statements by President Barack Obama,” there are still over 30 Baha’i prisoners in Iran today. Further, Baha’is are still “banned from practicing” their faith in Iran, laments USCIRF.

Other international organizations are responding to the perceived repression of religious freedom. On July 6 several Nobel laureates, including South Korean President Kim Dae-jung and South African Archbishop Desmond Tutu, appealed to United Nations Secretary General Ban Ki-Moon, “to urge the release of political prisoners” in Iran and to assess the aftermath of elections gone wrong. In like manner chair-person Leo issued a call to Ki-Moon, to “appoint an envoy to investigate instances of repression in Iran such as the impending Baha’i trial,” reports USCIRF.

Suspicion of religious persecution is partly due to Iran’s charges against these prisoners. VOA News says official Iranian news reports cite “a variety of crimes” including “propaganda against the system,” “insulting religious sanctities,” and “being corrupt on earth;” the last of which warrants the death penalty under Iran’s judicial system.

As though the charges did not clarify the matter sufficiently, other factors contribute to the view that Iran is persecuting people for their religious beliefs. A recent State Department report says “repression of the Baha’i community in Iran” has “continued unabated” over the past year, according to the VOA. The same report says that Iranian officials call Baha’is “apostates,” and they are “banned” from governmental institutions including public schools and universities, “unless they conceal their faith.” Further, Baha’is are subjected to arrests and property confiscation; and at the end of 2008 at least 40 Baha’is were imprisoned. U.N. representative Diane Ala’i thinks the Iranian government is conspiring against the prisoners in several ways. Though the looming trial was delayed and has yet to be rescheduled, the seven Baha’i prisoners at the center of attention (pictured below) have not been permitted to speak to their attorneys. Further, one of the two attorneys – Nobel Peace Prize laureate Shirin Ebadi and human rights lawyer Abdolfattah Soltani – has gone missing. Amnesty International states that Soltani “was arrested in Iran on June 16 and his whereabouts are unknown,” according to CNN News.

Ala’i says that the Baha’i faith has suffered “more than 200” executions in Iran since “the Islamic revolution in 1979.” However, Iran “denies” that they have “mistreated” the Baha’i community. General Qorban-Ali Dorri Najafabadi, prosecutor of the trial yet to come, says that “all the facilities offered to other Iranian citizens” are extended to Baha’is. But he also says that “there is irrefutable evidence that many Baha’is are in close contact with Iran’s enemies and have strong links to Israel,” reports CNN.

Though Najafabadi insists that religious oppression is not directed towards Bahai’is, the Baha’i World News Service warns that attacks on Baha’is “continue to escalate,” including “arrests, long interrogations, raids on homes, confiscation of assets, closing of businesses, denial of education and employment, harassment of schoolchildren, and many other forms of persecution.”

One prisoner, however, emerged victorious. Roxana Saberi told CNN that she is “very happy to be free and to be with [her] parents again;” and she is encouraged by “global support” resulting from her plea for international action towards treatment of Baha’is in Iran. Having gone on hunger strike during her imprisonment, “her father said she has since put on some weight.”

The issue of religious persecution around the world is much larger than the Baha’i-Iran scenario. For westerners it is difficult to imagine living under such conditions. Perhaps the privilege of religious freedom Americans often take for granted should be reconsidered. And perhaps the force of governmental tyranny so unfamiliar to religious groups in the U.S. should encourage us to stop fighting over trivialities like the style of music our worship leaders play, differing interpretations of the Bible, and relatively minor differences of political beliefs. Things could be a lot worse.

The Baha’i Faith: The International Website of the Bahai’is of the World