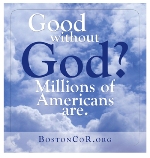 Good without God? Is it possible? Is it possible for a person to disbelieve in God and still be moral? A recent ad campaign targeting Boston commuters answers this question with a resounding “Yes!” and David Abel, staff writer for the Boston Globe covers the story in his article, “New T Ads Reach Out to Hub’s Nonbelievers.”

The complete ad, set against a blue, cloud speckled sky, runs thus: “Good Without God? 40 million Americans are.” The month long campaign, initiated and funded by the Boston Area Coalition of Reason, may be seen on 200 subway cars throughout the month of November at a cost of $11,000.

The Boston “Good Without God?” campaign is not an isolated event. The advertisement is being launched in New York, New Jersey, and Chicago, and there are plans to extend coverage to another 10 US cities. The extended coverage will synchronize with the publication of “Good Without God,” written by Greg Epstein. Epstein is the Humanist chaplain at Harvard and a United Coalition of Reason board member.

The “Good Without God” ads are sponsored by the United Coalition of Reason, a national group that sponsored the “Don’t believe in God? You are not alone.” campaign that ran earlier this year in Dallas, Des Moines, Phoenix, New Orleans, Charleston, S.C., and other cities across the nation.

Advertisements of this nature have appeared in London too. In 2008, the British Humanist Association ran the ad “There’s probably no God. Now stop worrying and enjoy your life.” on the sides of London buses.

What is the purpose of the “Good Without God?” campaign? Fred Edwords, leader of and spokesperson for the United Coalition of Reason, indicates that the point “is to reach out to the millions of humanists, atheists, and agnostics living in the United States.” The campaign does not seek to turn theists into atheists, but to address the growing number of nonbelievers within the United States. In 2007 the Pew Research Center for the People & the Press published a survey indicating that 20% of 18-25 year old Americans “say they have no religious affiliation or consider themselves atheists or agnostics.” Compared to a similar survey taken 20 years ago, these numbers are “nearly double.” Another survey undertaken in 2007 found that 12% of Americas 20 years of age and older consider themselves “not religious,” which represents a 4% increase from 1987.

For those who are “Good Without God,” non-belief may feel like a lonely and secluded existence. Edwords hopes the campaign will relieve such feelings. He states, “Nontheists sometimes don’t realize there’s a community out there for them, because they’re inundated with religious messages at every turn. So we hope this will serve as a beacon and let them know they aren’t alone.”

Religious advertisements are nothing new for commuters in Boston. They have seen advertisement space purchased by Christian churches, Catholic charities, Islamic societies, and Scientologists. When David Abel covered this story there had not been any complaints about the Boston advertisements. However, Stephen Prothero, Professor of Religion at Boston University, foresees that”there will be conservatives upset about this, because they don’t want nonbelievers in the public space.”

Commenting further, Prothero does not perceive the “Good Without God?” campaign to be fueled by evangelistic motives. Instead, Prothero believes”this is more of a coming-out party for atheists; It’s about achieving a public recognition. … [it] is about not wanting to feel invisible.” In light of Prothero’s analysis, it appears that nonbelievers and liberal-evangelicals may have a degree of commonality: both groups have been overlooked and both are beginning to find their voice.