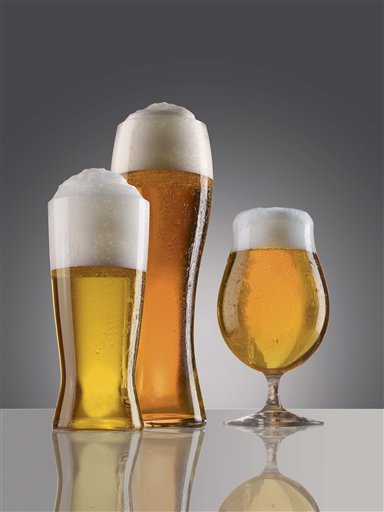 **FOR USE WITH AP LIFESTYLES** This undated photo provided by Spiegelau shows Spiegelau Beer Glasses. If you're going to splurge for those pricey craft beers, you might as well quaff them from glasses that do them justice. (AP Photo/Spiegelau) **NO SALES**

It’s hard to believe that the two year anniversary of one of my favorite brewing days is almost here. On August 24, 2008 I brewed a 5 gallon batch of a beer that would come to be known as “Election Wheat.” I planned to allow the beer to ferment and age for the three or so months leading up the Presidential election and enjoy it on tap as my wife and I watched the election returns come it. For my fellow home brewers I’ll include the recipe below, but as I prepare to remake that recipe in anticipation of the 2010 mid-term elections I’m struck by the tremendous shift in the political winds that a single year can bring. “Yes we can!” “No we can’t.” “Drill baby drill!” “The Tea Party” “It’s the Economy Stupid!” “It’s this Stupid Economy!”

Have we as a nation really done a 180 or are we just half way through a full 360? Have we decided that we really do miss President Bush? Should we pull out and dust off those old “Don’t Blame me; I voted for Bush” bumper stickers? These questions haunt me, but I can’t quite bring myself to think that we as a people are so schizophrenic that we would elect a professed Liberal to the Whitehouse, only to turn around two years later and repudiate that same Liberalism. Now, maybe we will do just that with our votes. Maybe the first Tuesday after the first Sunday in November 2010 will swing the Legislative branch back in a Conservative direction, but I doubt that this will tell us very much about the long term ideological arch of our country. I don’t think the nation is suddenly swinging in a conservative direction. Rather, I think we’re simply seeing an inevitable yo-yo reaction to change. Just as a young kid runs off from mom and dad to explore the new world and then runs back to familiar arms whenever she encounters something new, we may be simply freaking out about this strange new world that Obama is leading us into and are retreating to the protective and Conservative arms of mommy and daddy. This is an inevitable reaction to Liberalism. Liberalism brings change. Change is frightening, so we react by retreating: two steps forward, one step back (I’ll stop now before I go on quoting Paula Abdul.)

With this psycho-social dynamic in mind, I present you with a purely fictitious re-imagination of Judas. What if he was just scared? What if he followed Jesus because of his vision, but then “freaked out” as he saw just how radical Jesus’ vision was? What if Judas simply reacted as many of us do when we are faced with too much change too fast–he became frightened and lost his nerve? He took the coward’s way out.

I know that it has been some since I’ve written. Since I last saw you at the Sea of Galilee we have rarely stopped for more than a day or so at one place, so it was only now that I was able to find a merchant willing to carry my letter back north to you. We travel light, but the crowds continue to sustain us wherever we go. I thought that their energy would have waned by now, but it seems that there are more people every time he stops to speak.

The last time we were together, you and I, I shared with you my growing misgivings about our teacher. I wish I could say that my concerns have proven to be baseless, but the opposite has occurred. I grow more worried not less. Informers and officials of the empire now shadow us wherever we go and while the teacher never commits outright treason his rhetorical gifts give him tremendous power, and this cannot fail to cause suspicion and fear in Jerusalem and perhaps even in the provincial capital. “Slowly, slowly,” I tell him at every chance I get to speak with him alone, “we cannot change the world overnight. You are moving too fast, you are risking everything.” But he does not listen. He will not compromise.

I still love him and his passion. I still share his ultimate goal and trust his vision, as I know you do as well, but I fear that it will all be for naught if he doesn’t develop some political sense very quickly. He makes enemies almost as quickly as he makes friends and converts. He offends powerful men and interests, he threatens leaders and industries in a reckless fashion. What is worse, he alienates many of those who could be his best allies. How many times have I pleaded with him to sit down with the Pharisees and work out a common program? But Sarah, he’s too much of an ideological purist. He doesn’t understand the way that the world works. He demands too much too fast. So I come to the ultimate point of my letter. I fear that I must soon decide on a new course of action. I still believe in the message, but I no longer believe in the messenger. We cannot free our people and become a holy nation again without first winning over the leaders of the people. I fear that I must leave him and return home to you.

Please do not think poorly of me. I know that we had dreams of raising our children in the Kingdom of God, but the hard truths of politics tend not to respect the dreams of young people. I have aged much these past three years with our teacher, more in mind that in body and I know with certainty that his methods will fail. He lacks tact, he lacks cunning, he has no mind for power and no heart to face real facts. He is a dreamer and if we ever want to see our dreams become realities, then we need another leader. So I will come home. I have skills and money and connections, so maybe I can use what I’ve learned these past years to help raise up a new, more sensible leader for the cause. All will not be lost. It will simply be delayed. So be glad my love. I’ll be home to you soon. Once the teacher reaches Jerusalem I’ll return to you after Passover.

All my love, Judas

Best after 2 months in the carboy and one month in the keg. Turn on CNN and enjoy the election returns.

Both Bases Worry as the Status Quo on Abortion Shifts