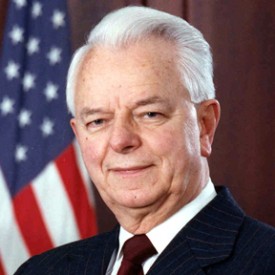 As the blogger here at LiberalEvangelical.org I often find myself in conversations with Liberals and Evangelicals who cannot understand how and why I am willing to identify as both a Liberal and an Evangelical. When I talk with Evangelicals, many of whom are conservative, I point to the life of Jesus and many other markers along the history of Evangelical Christianity to defend my identification with the goals of Liberalism. However, when I talk with Liberals, especially secular Liberals, I find that many of them want me to explain the value that I see in religion. Why, they ask, need we be religious, much less Christian and Evangelical? Today I turn to the life of the late Senator Robert Byrd as an example.

I’ll cut right to the point. I do not have the miraculous power–a power President G. W. Bush once claimed to have–of looking into a person’s soul, but I know that a religious conversion can lead to a radial change, so radical that Jesus called this kind of change being “born again.” I don’t know that Senator Byrd was born again. I don’t know anything about his religious life, but I do know that over his career in the U.S. Congress as a Representative and a Senator from West Virginia he went from being a leader in the KKK and an opponent of the Civil Rights Movement to being a champion of Civil Rights and a leading Liberal voice in the Senate. He served for 58 years and over that time underwent a nearly complete transformation.

What leads a man to make such a radical change? Maybe Senator Byrd is simply an outlier, an extraordinary person (he was after all the longest serving member of congress ever) whose radical transformation is a kind of statistical fluke. But I’ve known other folks who’ve changed this drastically, and in my experience they have all undergone a radical religious transformation. They’ve all been born again. So when Liberal friends ask, why do you so value religion? I tell them I value religion and cling to the Evangelical commitment to Jesus because I think that real life changing transformation is unachievable for most of us without the radical intervention of the divine. We must be born again!

As I mentioned above, I know very little about Senator Byrd the man and I cannot see into his heart, but I look at his career as a testimony to the brute fact that people can change, habits can be broken, and our past does not hold complete sway over our future. Our world and our churches need more than a nudge in the right direction, we need continual and radical transformation. The long strange career of Senator Byrd reminds us that such transformation is possible.