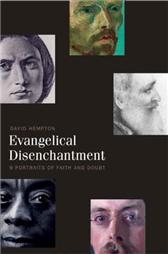 In his new book Evangelical Disenchantment, David Hempton, a religious historian at Harvard Divinity School, offers nine biographical accounts of exuberant faith, relentless doubt, and acute disenchantment in regards to the evangelical tradition. His subjects are George Eliot, Francis W. Newman, Theodore Dwight Weld, Sarah Grimke, Elizabeth Cady Stanton, Frances Willard, Vincent van Gogh, Edmund Gosse, and James Baldwin. With the exception of Edmund Gosse, each account shares the same general narrative arc, beginning with fervent commitment to faith, traversing through the painful shadows of doubt and disillusionment, and ending with the renouncement of the evangelical tradition. The journey from pious evangelical faith to resolute disavowal unfolds differently for each, as does the personal aftermath of such radical reversal. Taken together Hempton’s vivid portraits reveal both the strengths and shortcomings “of what is now one of the largest and fastest-growing faith traditions in the world” (198).

Disenchantment has accompanied the evangelical tradition since its inception, yet there has been relatively little written on the topic. Perhaps more interesting is the fact that evangelicals have a long history of turning a deaf ear to the plight of their prodigal sons and daughters. According to Hempton, this is largely due to the fact that those who leave the faith are often viewed as “theologically heterodox or morally reprehensible, or both, and hence not deserving of much consideration, except as warnings to the faithful” (7). In contrast, Hempton’s agenda in chronicling evangelical disenchantment is not to endorse disenchantment, but rather to bear witness to its reality, and allow its representatives to have their stories told.

Hempton begins with the story of 19th century novelist Mary Ann Evans, better known as George Eliot, whose literary masterpiece Middlemarch is widely considered to be one of the greatest novels in English literature. As a teenager Eliot came under the influence of the Methodist revivalism of 19th-century England, and subsequently devoted herself wholeheartedly to evangelical faith. However, for Eliot that faith was not to last into adulthood. And as is the case for many find themselves on the other side of a once cherished belief system, she could be one of her ex-traditions fiercest critics. This can be seen most clearly in a lucid, yet polemical article written (anonymously) by Eliot and published in the Westminster Review in 1855. It was this article which originally inspired Hempton to research evangelical disenchantment. In it Eliot attacks a particular Evangelical minister (Dr. Cumming) who seems to embody everything she despised in the Evangelical tradition as a whole. Eliot’s brilliantly written harangue deserves citation:

Given a man with moderate intellect, a moral standard not higher than the average, some rhetorical affluence and great glibness of speech, what is the career in which, without the aid of birth or money, he may most easily attain power and reputation in English society? Where is that Goshen of mediocrity in which a smattering of science and learning will pass for profound instruction, where platitudes will be accepted as wisdom, bigoted narrowness as holy zeal, unctuous egoism as God-given piety? Let such a man become an evangelical preacher; he will then find it possible to reconcile small ability with great ambition, superficial knowledge with the prestige of erudition, a middling morale with a high reputation for sanctity; let him be stringent on predestination, but latitudinarian on fasting; ardent and imaginative on the pre-millennial advent of Christ, but cold and cautious towards every other infringement of the status quo; let him be hard and literal in his interpretation only when he wants to hurl texts at the heads of unbelievers and adversaries; let him preach less of Christ than of Antichrist; let him be less definite in showing what sin is than showing who is the Man of Sin, less expansive on the blessedness of faith than on the accursedness of infidelity (20).

According to Hempton, Eliot’s article goes on like this for another 30 pages.

That Eliot experienced profound intellectual disenchantment is not odd, for she was certainly one of the greatest female intellectuals of the 19th century, as evidenced not only by her own literary corpus, but also by her translation of David Strauss’s Das Leben Jesu, Baruch Spinoza’s Tractatus Theologico-Politicus, and Ludwig Feuerbach’s Das Wesen Christenthums. However, Hempton argues that Eliot’s adherence to German higher criticism and concomitant rejection of the inspiration of Scripture was the consequence, not the cause of her evangelical disenchantment (37). The cause itself had more to do with her increasing disillusionment with the disparity between the radical ethics of the New Testament and the lackadaisical morality of the contemporary Church. Eliot had a deep concern for the poor and marginalized of society, and could not square the teachings of Jesus on “the least of these” with the self-satisfied bourgeois attitude of most Christians. Given her empathic nature she also struggled to accept the biblical depictions of God sanctioning genocide and eternal punishment. Her eventual exposure to German higher criticism served as the final nail in the coffin of her evangelical faith.

Throughout all of Hempton’s narratives there appear two main causes for disenchantment, viz. moral and intellectual disenchantment. Nearly all of Hempton’s subjects experienced immense frustration and disenchantment due to the asymmetry between the lofty ideals of Christian ethics (e.g. the sermon on the mount and Jesus’ preaching on the Kingdom of God) and the de facto reality of the Christian church and society. Many also experienced the spiritually destabilizing realization that many of their traditional beliefs could not sustain intellectual scrutiny. Again, there is an asymmetry between the grandiose claims of Evangelicalism’s elaborate doctrines (e.g. the inerrancy of scripture, the virgin birth, the trinity, etc.), and the de facto implausibility, obscurity, and in some cases incoherence of such doctrines. If we take Hempton’s narratives in light of these two main causes of disenchantment, the results are fascinating. Of the nine biographical figures, all experienced moral disenchantment with their evangelical tradition. Those who also experience intellectual disenchantment (Eliot, Newman, Weld, Cady Stanton, and Baldwin) experienced this only after undergoing moral disenchantment.

An interesting aspect of evangelical disenchantment is that, at least among Hempton’s representatives, it never resulted in outright atheism. Instead, nearly all of Hempton’s subjects retained some form of religiousness or spirituality, almost always involving of a belief in human dignity and divine love. The post-evangelical faith of Francis W. Newman could be summed up in his statement that “adoration of God is the universal and final religion” (68). And an older, more balanced Eliot would write, “I have no longer any antagonism towards any faith in which human sorrow and human longing for purity have expressed themselves; on the contrary, I have a sympathy with it that predominates over all argumentative tendencies” (38).

Hempton’s rich and colorful portraits of faith and doubt give rise to many thought-provoking conclusions regarding the evangelical tradition. One of the implicit conclusions is the link between intellectual disenchantment and the tendency of evangelicals to focus more on theological doctrine than love of God and love of ones neighbor – what Jesus referred to as the two greatest commandments. A more overt conclusion would be the link between moral disenchantment and the evangelical emphasis on being born again, vis-a-vis the hypocritical disparity between proclamation and actual practice. Although many of Hempton’s subjects lived during the 19th century, the majority of the issues portrayed in these narratives remain problematic for the evangelical tradition today. Hempton maintains that the complicated issues surrounding the relationship between evangelicalism and fundamentalism, feminism, race, art and creativity, social justice, biblical criticism, and scientific discovery, “are more often the cause of reflection and soul-searching among ordinary evangelicals than many of the noisier representatives of the tradition either acknowledge or care to address” (198). Hempton concludes that the stories of the disenchanted ought not to be seen as a challenge to or an aberration from the evangelical tradition; rather such stories must be acknowledged as being part and parcel of the tradition’s complex legacy.

Evangelical Disenchantment is truly a delight to read. Hempton writes with simple elegance, and has the ability to weave together biographical materials in a seamless fashion. The result is that the subjects seem to speak for themselves, and the reader often forgets that it is Hempton who is telling the story. The narratives are incredibly moving, and sometimes heartbreaking. And most evangelicals, whether enchanted, disenchanted, or somewhere in between, will recognize many of their own struggles within these pages.

Furthermore, Hempton is remarkably gracious in his assessment of the evangelical tradition. His critiques of evangelicalism are always balanced and well supported, and he shows no interest in making sweeping generalizations or polemical pronouncements. Rather he takes on the tradition in all its complexity, with its strengths and weaknesses, and gives voice to an often neglected demographic that is nevertheless inextricably bound up with the evangelical tradition. Hempton’s conclusions are subtle and compelling, and one hopes they may stimulate evangelicals to reconsider the plight of their disenchanted.