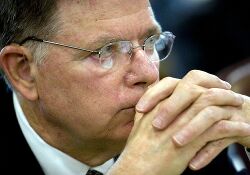 On May 31, 2009, Dr. George Tiller (pictured at right) was shot and killed. The New York “Daily News” reports that Tiller, “one of only three American doctors who performed late abortions on women with deformed fetuses, was gunned down inside his Wichita church as he chatted with a fellow usher about taking his grandkids to Disneyworld.”

Tiller had been called “Tiller the baby killer” by anti-abortion activists. Having been shot prior to this incident for his pro-choice stand, Tiller “often wore body armor–but not to church.”

Reactions to the Tiller slaying from denominations on both the liberal and conservative wings are flooding the media.

Member and usher at the Reformation Lutheran Church in Wichita, Kansas, where the shooting occurred, Tiller is remembered by a saddened church community, which has issued a “media statement” in memory of him. The statement emphasizes that the church rejects “any notion that violence against another human being is an acceptable way to resolve differences over any issue.”

“We must always strive to engage in peaceful discussion. Our faith calls us to this. Our humanity demands it… In this time of uncertainty, we stand firm in the promises of Jesus Christ: forgiveness, hope, love, and new life, even from death. We pray for healing and peace to be restored. We offer our thanks for the many prayers of support from across the country. Your words of encouragement are a blessing to the people of Reformation Lutheran Church and Wichita.”

In contrast, some churches taking a strong anti-abortion stance, such as Westboro Baptist Church, are not grieving this incident. Rather, they are picketing Tiller’s funeral service. Led by pastor Fred Phelps, this congregation believes Tiller’s death is an act of vengeance from God, claiming that the shooting was “A summons from an angry God – God hates Wichita, land of baby-killers.”

The Catholic Church has spoken out against this incident, opposing violent methods of protesting abortion. An article in Catholic Online discusses Catholicism’s stance, with a denunciation of the Tiller slaying by Cardinal Justin Rigali, chairman of the U.S. Bishops’ Committee on Pro-Life Activities. He says that, “Our bishops’ conference and all its members have repeatedly and publicly denounced all forms of violence in our society, including abortion as well as the misguided resort to violence by anyone opposed to abortion. Such killing is the opposite of everything we stand for, and everything we want our culture to stand for: respect for the life of each and every human being from its beginning to its natural end. We pray for Dr. Tiller and his family.

National Public Radio’s On Point with Tom Ashbrook has posted a radio session covering liberal and conservative reactions to the Tiller murder and to abortion in general. Reverend Kathrine Ragsdale and Jim Wallis are interviewed as representatives from each camp.

Ragsdale is Dean and President of Episcopal Divinity School, director of Political Research Associates (researching “right-wing political movements”), and has served as a chair of Religious Coalition for Reproductive Choice. Wallis is founder and editor of Sojourners, “a progressive evangelical Christian magazine and faith community.” Wallis has also written books relating to left-right political and moral controversies, the best known of which is God’s Politics.

Ragsdale knew Tiller personally, and she says he was a “powerful, brave, dedicated, [and] spiritual man”. Heralded as one of the few “defenders” of abortion, Ragsdale and Ashbrook discuss why defenses of abortion are seldom heard, and why objections are so often heard. She says that, over time, the message of pro-life has been blurred with anti-choice. She is pro-life, but also believes in a woman’s right to choose. Obviously nuances matter.

Ragsdale claims that part of the problem is ignorance. For example, anti-abortionists complain that Tiller performed late-term abortions, focusing on the development of the fetus. But Ragsdale says that Dr. Tiller performed late-term abortions only when the woman’s life was in danger and when “there [was] no hope for the fetus.” The women he cared for wanted babies, not abortions. But they “were not going to be able to have the baby they dreamed of.” That “tragedy” is compounded, says Ragsdale, when women in such situations cannot find medical assistance because abortion is illegal where they live. As a result, many women were forced to travel to Wichita, to see Dr. Tiller. In this regard, she says, Tiller saved many women.

Ragsdale elaborates her position by stating: “I am an Episcopal Priest; I am grounded in the Judeo-Christian heritage. Looking at Genesis, we were created by God and we have a responsibility to use the gifts and talents we’ve been given.” Some women are called to motherhood, some to other ministries. If a woman’s ministry is incompatible with motherhood, women have a responsibility to control their reproductive health and freedom, or women will be “incapable of responding to God’s command to us: to know, cultivate and use the gifts and talents we’ve been given. Women don’t have a chance for an equal place in society, in the church, or for an equal opportunity to be the creatures God made them to be, unless we can control our reproduction. The ability to do that is one of the blessings that medical science has given us through the ages.”

She also discusses the way that gender power struggles function in the abortion debate. For her, the attempt to oppose abortion is really about keeping women in their place. The anti-abortion position is about “misogyny, it’s about maintaining the power balance and men making decisions [for women]. The folks who want to outlaw abortion don’t want to outlaw it entirely, they just want men to be in charge of deciding when it happens. It’s about control, and unless women can control our own lives we can’t be equal partners in the world, and this world needs equal partnerships.

Roman Catholicism, for example, teaches that no sexuality apart from the intent to procreate is admissible, and that the man is the head of the woman. Ragsdale responds by stating that Catholics are “entitled” to their own opinions. What they are “not entitled to do is impose those opinions on other folks.”

Many–on both sides of the abortion issue–deplore the killing of Dr. Tiller. But Ragsdale points out that many abortion opponents create a “poisonous environment” that threatens the basic rights of women. She considers a society that doesn’t support women’s rights deplorable. What does she mean? The anti-choice folks focus on where life begins. “We can’t know”, she says, but we do know that “the woman has a life.” Consequently “a fetus or in some cases a zygote – a barely fertilized egg – has taken on the moral equivalency of a woman, and that’s deplorable.”

Jim Wallis, on the other hand, offers a pro-life perspective. He calls abortion a “moral tragedy” and laments the malodorous atmosphere of the abortion debate. He says that Tiller’s murder was a “terrible killing” indicative of this atmosphere: “This is a profoundly moral issue” calling for a civil debate that seeks “common ground.” The majority of both sides, he says, agree that criminalizing abortion is not the answer. Rather, there are “too many abortions” and too many women in “desperate situations.” So, how do we stop “screaming at each other or shooting each other?” The common ground he wants to encourage is found in reducing the number of abortions without criminalizing abortion.

Wallis says that he supports women’s rights. But “at the same time, there are moral issues here.” He thinks that respecting one another in this debate is paramount. He cites Obama as an example of one who supports abortion but calls for abortion reduction. Wallis concludes that abortion reduction serves as a meaningful shared goal in the abortion debate.

Ragsdale reacts by stating that abortion reduction makes some abortions impossible. She prefers to give “women a real choice” and to avoid calling abortion “a moral tragedy.” Rather, abortion is “morally complex – and in some cases a tragedy – but abortion provides women the right to exercise their sexuality and not have children when other contraceptive methods fail.”

When asked how he responds to an Episcopal priest that says abortion is not a moral tragedy, Wallis responds by stating that the longer the life of a zygote or fetus continues, the more complicated the moral issue becomes. A woman has a legal right to end her pregnancy, but the sad fact of unwanted pregnancies is what makes the situation “tragic.”

In response, Ragsdale says that for some women abortion is a “moral tragedy” – but not for all women. Such strong language affects the way people feel about abortion. Calling abortion a “moral tragedy” makes some women who would not otherwise be in conflict suddenly feel conflicted. This language suggests that women “ought to feel” guilty and in conflict, and this is the problem with Wallis’ terminology. This is an important distinction for Ragsdale, and she believes that focusing on this distinction may reduce extreme views and extreme actions, like the Tiller slaying.

On Point with Tom Ashbrook