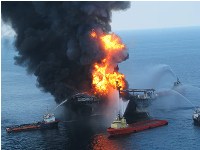 As Americans we consume roughly 19.5 million barrels (1,072,500,000 gallons) of oil a day.* Oil fuels our automobiles, our semi-trucks, our bicycle tires, our tooth brushes, our corn production, and our other innumerable daily activities. In our current manner of living, oil is as necessary as oxygen, water, and beating hearts. On most days the presence of oil in our lives slips to the background of our minds. Our use of oil is habitually invisible and the ways and means that oil is produced and distributed even more so. Yet, when gas prices rise exponentially, when an oil tanker runs aground, when an oil rig explodes, we then begin to pay attention to oil’s presence in our lives.

On April 20th the BP oil rig Deepwater Horizon located in the Gulf of Mexico exploded. As a result of the explosion 11 oil workers perished, and as reported by Discovery News, the U.S. Geological Survey estimates that as much as 12,000 to 19,000 barrels of oil (660,000 and 1,045,000 gallons respectively) have been gushing into the Gulf per day as the disaster continues.

At this point, all attempts to stop the gushing oil have been futile. The BBC reports that BP is attempting to drill two relief wells that will eventually halt the leaking, but the projected time of completion for these wells is August – two more months of massive oil spillage.

In the times when our attention is draw to oil, we begin to count the cost. And, generally speaking, we count the cost for us. But, in the face of the explosion of the BP oil rig Deepwater Horizon, it may be fruitful for us to reflect upon the cost for others. In this act of reflection, what moral responsibility do we have, what reparations do we owe, to the animals that have been killed and will be killed, and to the ecosystems that are being destroyed by our production, distribution, and use of oil?

By looking to the past we can gain an idea of the scope of devastation that such a large-scale oil spill can have on animal life. Resulting from the nearly 11 million gallons of oil spilled by the Exxon Valdez emergency in Alaska’s Prince William Sound (1989) scientists estimate that “1000 to 2800 sea otters, 302 harbor seals, and unprecedented numbers of seabird” (approx. 250,000) died in the days following the spill. In conjunction with these animal deaths, “mass mortality also occurred among macroalgae and benthic invertebrates” records The Encyclopedia of Earth.

The current crisis in the Gulf is quickly becoming the largest oil disaster in U.S. history, and the number of animal deaths and breadth of ecological damage will likely surpass that caused by the Exxon Valdez disaster. What amends must we make, not only to the families who have lost loved ones, not only to those who have lost their livelihoods, but also to those who die silently?

To read “Scramble is on to Gather Data on Oil Spill Effects” by Jessica Marshall for Discovery News click here.

To read The Encyclopedia of Earth article on the Exxon Valdez spill click here.

For dramatic pictures of the spill from the Boston Globe click here.

For recent news on the crisis in the Gulf see the following articles:

“Favre” [farv] – noun, from the original French for Judas