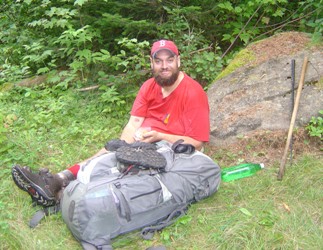 Day 2, On the Banks of the Jessup River, 6 miles north of Piseco, NY.

I had been making almost record time all day. It was only 3:00 PM and I’d covered nearly 15 miles through the woods. My 50 lb. pack was starting to chafe a bit, but the relatively clear and smooth trail was helping me stay on schedule. At the river crossing I shrugged off my pack and broke out the camp stove to prepare a meal of chicken bullion, soy nuggets, Raman noodles and lentils – It’s much better than it sounds! As I sat waiting for the water to boil I met some new people.

I’ll spare you their names, but they were a father and son from less than 50 miles away. They were a bit startled to see someone else this far back in the woods, but since this was the spot where the Northville-Lake Placid Trail and the Jessup River intersected I wasn’t shocked to see them. I was shocked, however, to see the high-powered rifles they carried and the handguns slung at the father’s side.

I find that it’s best not to startle anyone in the woods so I always try to announce my presence while still at some distance. “Howdy,” I called while they were some 30 yards down stream. They came along and we had the obligatory chat about the weather and the trails. They’d hiked in from a side trail and when they saw me eyeing the weapons they were quick with an explanation; “It’s red squirrel season.” Well, I wasn’t going to argue with their claim. If they said they were after red squirrels then red squirrels it was! Though I’d like to see what’s left of a red squirrel when they’ve brought one down. The boy was carrying a 44 and the father had a 30-06. Both had scopes. For those of you unfamiliar with the finer points of squirrel hunting, going after red squirrels (two thirds the size of grey squirrels) with those weapons is like using a baseball bat to swat a fly.

I finished dinner quickly and hit the trail once more, hoping to put some serious distance between me and these fellas before I pitched my tent for the night.

Alone in the Adirondack mountains for 9 days I plenty of time to think, and plenty of time to reflect on that meeting at the Jessup River. Clearly these two were opportunistic poachers. They were armed for bear, deer or moose and could probably have taken one without notice, field-dressed it and had it in their truck without anyone being the wiser. They were ready with the “red squirrel season” in case anyone asked, but hadn’t expected to encounter a soul this early in the year.

I’m not anti-hunting. I actually enjoyed squirrel hunting with friends when I still lived in Kentucky, but when I encounter heavily armed people in the woods, miles from the nearest road or phone I am a bit taken aback. The truly scary thing is that these kinds of encounters are likely to increase since gun owners – when properly licensed – can now legally carry concealed weapons in our national parks. The key provision was tucked into the credit card reform bill that President Obama is supporting – the House voted on the bill on May 20 but reconciliation is still to come.

Ok, so given the name of the website one might expect a Liberal rant on guns and violence to ensue. I won’t do that because I’m not anti-gun. I grew up with too many cousins and uncles that hunt and a brother who is freakishly fast and accurate with a shotgun. I appreciate the Second Amendment and wish that the ACLU would work consistently to protect all of our civil liberties. So I can’t rant about something I generally support. I can, however, question the wisdom of expanding the right to bear arms into public places and common spaces. That is where I would draw the line.

Regardless of my own opinion, I think that there is a larger lesson here regarding process, and if we can back off from the emotions that usually surround gun issues we may begin to understand something profound about human behavior in politics and churches that sometimes leads to problems. The key thing to notice is that the NRA approaches each and every discussion about guns as a potential “thin end of the wedge.” We must, they argue, hold onto every bit of possible ground, legislative and rhetorical. Give an inch and the anti-gun crowd will take a mile. And predictably those who oppose gun ownership often work under the same assumptions. This kind of thinking leads to some absurd positions: churches holding “bring your gun to church” worship services and gun-rights lobbyists arguing against the right of individual states to set their own policies on concealed weapons.

Gun-rights moderates like me feel like we’re left without a voice and without a home. The temptation is to give in to the psychological tug of tribalism and support the group no matter how screwy the proposal, because when we speak up and try to exercise a moderating voice our loyalty is questioned and we’re made to feel unwelcome – an especially uncomfortable feeling when your group is armed to the teeth! And this is not strictly a phenomenon of the Right. During my time at Harvard Divinity School I remember numerous times when the same group-think, with-us-or-against-us dynamic took hold in the student population.

My question for readers of LiberalEvangelical.org is whether or not we’re prepared to fight against this particular social dynamic in our churches. Broadly speaking, Evangelicals have come to be so identified with social conservatism that the very phrase Liberal Evangelical sounds to many of our fellow Evangelicals like a slap in the face. Are we not disloyal? Are we not betraying the Gospel by offering moderates positions on questions like Biblical literalism and infallibility? Are we not providing fodder to the enemies of Evangelicalism by reconsidering hardened positions on gay rights, social welfare, and ecumenism? Are we not greasing the slippery slope with all of our talk about inclusivity, tolerance, and moderation?

The short answer to all of these questions is a firm “maybe.” Yes, Liberal Evangelicals are running the risk of offering less than a united front against critics. We are willing to open ourselves up to criticism and questions. But at the same time I think that there is a frankness and honesty in our position that demonstrates real faith in the Gospel. We are willing to throw the naked Gospel out there and admit that the social and political edifices that Evangelicals have built up around it for the past 30+ years are unnecessary. We are willing to sink or swim with the Gospel itself. Isn’t this a deep sign of faith and trust – are we not throwing our lot in with the person and work and Jesus to an even greater degree when we refuse to under gird the Gospel with layers of social, political, and institutional protection?

Liberal Evangelicals are beginning to back off from many of the (dare I say it?) absurd claims and arguments that some Evangelicals have been making for decades. This is happening for at least two reasons. First, many of us are now third, fourth, or fifth generation Evangelicals and we are beginning to feel confident enough about our place in society that we no longer feel compelled to defend our own simply because they are our own. Our own social success has brought us to a place where we no longer feel existentially threatened and this security has lowered the rhetorical stakes. Secondly and more importantly, many of us are tired of the silliness. We are tired of feeling like we have to repeat the tired old “love the sinner, hate the sin” mantras and defend notions like a literal seven-day creation. We’re no longer worried about “the thin end of the wedge” and are more concerned with offering an honest and compelling Gospel to a world that has become more cynical about Evangelical claims. We’re beginning to understand that we actually have less to defend and argue for than previous generations may have thought. We’re beginning to have the courage to let the Gospel stand on its own.

Lucky for me, that strange meeting on the Jessup River passed without incident. I hope those fellas got a red squirrel or two for the cook pot, though I doubt there would have been much left beyond the furry tail if they actually bagged one with their rifles. I hope that someday in this country we can have political discussions about guns, abortion, marriage, and crime without feeling the need to defend absurd positions simply for the sake of guarding our political and social flanks. But most especially I hope that more Evangelicals can develop the courage to depend on the Gospel to speak for itself without social, political and rhetorical props. When more of us find that courage we’ll be better able to offer an honest and uncompromised witness.

Reimagining Judas One Pint at a Time