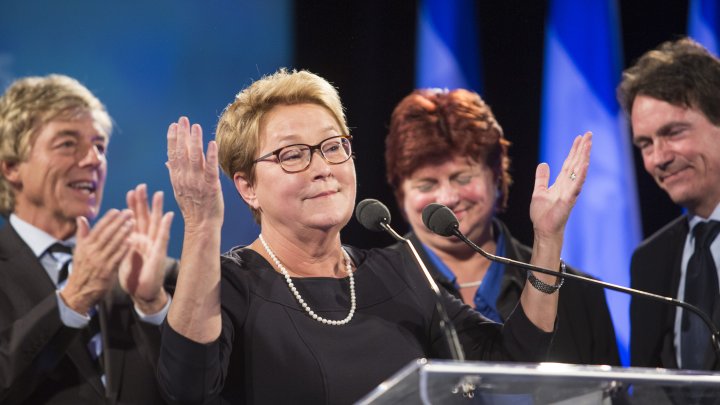 <>The Political Career of Pauline Marois

OK, so I’m not above a bit of shadenfreude. But did she ever deserve to lose! Even now, more than five months after her defeat, Montrealers are still giddy. “The air even feels different,” a former student told me when I ran into him at the IGA. What finally did in Marois was her insistence on a bigoted “Charter of Values” that would forbid government employees – and here in Quebec that means all teachers from Kindergarten through University – from wearing head scarves, yarmulkes, turbans and crucifixes. People have the right to know, her party argued, when receiving government services that they will not be discriminated against for religious reasons. In other words, she was trying to protect her largely rural, formerly catholic, and provincial population from ever having to encounter difference at the hospital, the university, the SAAQ or the courthouse. Secularism, as defined by Marois and her ilk, meant a robust freedom from religious difference. We are so lucky to be rid of her party’s particular form of bigotry and secularism – for now. But can we LEs do any better?

Secularism is coming to a small town and rural village near you, and no number of plastic 10 Commandments signs on the front lawn can stop it. The question is not whether secularism is coming – IT IS – but rather, what form will it take? My basic argument to you dear reader is that not only is secularism practically inevitable, but some forms of secularism are almost exactly in line with the larger aims of Liberal Evangelicals. The particular brand of secularism that I have in mind I call “Agnostic Secularism” and we should mobilize in our churches and voting booths to advance this variety of secularism. But perhaps more importantly, we should move beyond seeing secularism as a mere pragmatic necessity. Agnostic secularism is a great moral good, and LEs should be singing its praises far and wide. Allow me to go all Old Testament on you for a moment.

Think of all of the stories that share the following basic outline.

1) Powerful bad guy tells good guy to do or not do something idolatrous.

2) Good guy refuses and gets in trouble.

3) God rewards the good guy’s obedience to God and punishes the baddie.

Pretty much all the prophets? Check.

Jesus? Check (Thought I’d try to sneak a New Testament example past you.)

Many of the biblical narratives actually recommend a kind of secularism, at least on the part of governments that are not directly established by God. It is always a good idea, if you are not the anointed king of God or a divine prophet, to avoid legislating religious matters. Now, I will not try to make a biblical case for secularism. The issues are too complicated and our modern norms and democratic values complicate the matter beyond the scope of a simple blog. But I will offer a simpler pragmatic argument followed by a moral argument. Secularism will work for Liberal Evangelicals and secularism is the moral response to modernity.

There are dozens are kinds of Christian arguments that strive to defend secularism. King’s famous distinction between human laws and God’s laws, as outlined in his “Letter From Birmingham Jail” is one famous example. Niebuhr’s Christ and Culture is another. Many of these may be valid and we don’t need to think of them as mutually exclusive, so I’d like to add one more. In truth, it isn’t very original and it amounts to a simple claim: for LEs agnostic secularism works! We are built to thrive in such an environment because the métier of LEs is our ability to respond energetically to the challenges of pluralism without falling into two of the common low-energy default categories. When faced with difference, many of us respond as we would in the wild if we were faced with danger. Our fight or flight mechanisms are triggered. I’ll explain.

FLIGHT: Ah, the suburbs! How nice it is to be surrounded by such middleclass homogeneity where you can count on your neighbors sharing your language, your holidays, and most of your political opinions. We mentioned the phenomenon of urban flight and its coming reversal in a previous installment, but our churches often reflect similar social dynamics. How many urban congregations have decided to pick up and move to the suburbs because their neighborhoods are no longer white and middleclass? How many of our churches represent a single demographic? The easiest thing to do when faced with difference is run from it: run back to the suburbs, run back to a homogeneous church, run back to a mythical “golden age” when things were simpler. The thing about pluralism that makes it so challenging is that we can run from it without even noticing that we are doing so. We end up self-sorting and self-segregating, not necessarily because of a conscious decision, but because we naturally gravitate to folks with similar interests and concerns. “What, your kids go to Pleasant Valley Jr. High? Well, my kids do to! What, you play golf at the club on Saturdays? Well I do to!” And so it goes. We self-sort, and I’m as guilty of this as anyone.

FIGHT: Build the fence! Ban the burka! Burn the Koran! (Remember this “gentleman”) It sounds odd to call fighting a “low energy default,” but it is. It’s easier to react habitually to something strange by attacking it than by carefully considering how one might live in harmony with it. For instance, and I admit that this is a crass example, if I encounter a bee hanging around my wine glass in the back yard it’s much easier to squash the bee and continue sipping my wine than to search out a way of covering my glass. By covering my glass I am tacitly agreeing to tolerate the presence of the bee for some time and I know that I will have to alter my sipping habits until the bee leaves. Now, take this crass example and scale it up. It’s so much easier to squash difference and chase away strangeness than to have to reevaluate our most basic religious habits. Need another poignant example: here it is.

LEs are, in our marrow, prepared to respond differently. We are constituted to offer an additional alternative: Fight, Flight, or Learn to Live in Harmony! This alternative may not have been open to our ancient ancestors who either had to fight the jaguar or run from it, but since most of our challenging interactions are with other human beings, we at least have the alternative of exploring the possibility of building tolerant communities. Pragmatically this not only makes sense in terms of showing ourselves to be the true inheritors of Jesus’s Gospel message, but morally it is more and more evident that this is the right way to live

Confucians share with Christians and members of many other religious traditions a version of “the Golden Rule.” Analects 15.24 “Do not impose on others what you yourself do not want.” LEs may never have heard this negative version of the Golden Rule, but it is worth considering the ubiquity of this sentiment across all of the Axial Age religions. It is a distillation of the heart of Liberalism as defined by many social psychologists. Liberals, almost without exception, place less emphasis on in-group loyalty than do their Conservative counterparts, meaning that the functional definition of a term like “us” is potentially much broader and capable of generous expansion when new and unfamiliar people are encountered. The force of the Golden Rule in both its Confucian and Christian variants is to lead us to consider the humanity of those with whom we have dealings, even when they are quite different from us. Consider them, the rule reminds us, as being very much like you in many important ways.

Agnostic secularism is, I believe, the best way of realizing the Golden Rule in a modern pluralistic context. It is the moral social response to the challenges of the future. Over the past two months I’ve written about urbanization and the rise of social connectivity, and next time I’ll conclude this series on the Future of Liberal Evangelicalism by reflecting on rising multiculturalism. But for the moment, I want to pause to consider the following truism; without some form of agnostic secularism as a guiding rule, increased connectivity and urbanization will not lead us toward a diverse and multicultural world. Without a presumption in favor of agnostic secularism, we won’t end up with a world of interesting cities and densely connected communities. Instead, we’ll end up with human hives, densely connected urban communities of conformity. Respect for religious freedom is one of the few bedrock social habits that can preserve us from this fate that so many dystopian writers have envisioned.

The FANTASTIC defeat of Pauline Marois and her Charter of Values is not the end of religious and/or anti-religious fascism in the West. Constant vigilance is the price of freedom if we wish to avoid that most horrible of fates. Resistance is NOT futile! So resist LEs and advocate agnostic secularism.

“Energize the Base?” Why not call it what it is…appeasement.