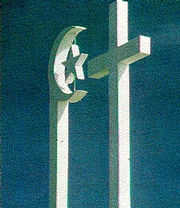 First, a plea for pity.

As the blogger here at LE.orgI’m faced with the task of constantly sifting the religious and political news and thinking about how I might thoughtfully respond. I try to avoid spouting off and often purposefully stay away from events and ideas that create particularly emotional reactions in me. If I react quickly, I find that I react emotionally and uncritically and there is already plenty of uncritical and emotional content out there on the web.

I write this only to let my loyal readers (Hi mom!) know why it is that the Glenn Beck rally on the Washington Mall, the Tea Party and the Lower Manhattan Islamic Center have not yet received comment. Additionally, I have decided not to speak in depth about the plan by some Evangelical to burn copies of the Koran on September 11. I find that it is best to let the furor surrounding these events die down so that I might formulate a moderate response. As Liberal Evangelicals I think that most of us value a more circumspect approach. I know I do.

So today I’m going to venture into these troubled waters, but I hope to do so with a self-critical eye. And so, with that as prologue…

A specter is haunting Evangelical discourse and it is one we should all be familiar with: hypocrisy. I don’t mean good old fashioned “say one thing and do another” hypocrisy. That is too easy to spot to worry me much. There is a deeper form of hypocrisy pervading our discourse and it is all the more dangerous because it wears the mask of modesty. I’m talking about the ways in which we define ourselves and the methods we sometimes use to characterize others. I guess it’s sort of a “plank vs. mote” issue, but I’ll have to use a few examples in order to make my point. Hang in there with me for a paragraph or two and see if you don’t agree.

This seems like an innocuous question, but the manner in which we begin to answer this question can generate considerable problems. By “Evangelical ethics” do we mean the ethics that Evangelicals ought to aspire to, or do we mean the actual lived ethics of real world Evangelicals? My hunch is that most of us Evangelicals – and I’m assuming here that most of you visiting this site identify as Evangelical – assume the former when we hear the phrase “Evangelical ethics.” We imagine the ethical norms and values that we hold up. We think of the example of Jesus and our other Christian role models. We picture to ourselves the life that is good, true and beautiful, and in so doing subtly set the stage for a rampant form of hypocrisy. We define ourselves and the religious group to which we belong by referencing the ideals to which we aspire. So far, all is well and good, but when the page is turned and we begin to define others and other religions, do we follow the same method?

Of course I am referring to the manner in which Muslims are so often described and portrayed in Western public discourse – and let us not ignore the fact that frequently it is Evangelical Christians who are describing and portraying Islam. When we hear or use the phrase “Islamic ethics” how many Evangelical Christians apply the same definitional methods. Are we consistent? When Muslims are depicted and characterized do we call attention to the “Greatest Hits” of Islam, its philosophers, statesmen, scientists, and religious geniuses or do we characterize Muslims largely based on their worst actors? I shudder to imagine the characterization of Evangelicals that would emerge if we defined “Evangelical ethics” as simply the functioning ethics of so many real life Evangelicals. Put simply, we often define ourselves by our ideals, but others by their actions. And this is a pernicious form of hypocrisy, all the more so because we can practice it while hiding behind the guise of modesty.

“Christians aren’t perfect, only forgiven.” So reads the popular bumper sticker. And it is correct so far as it goes, but this sentiment is frequently corrupted. Christians, so the bumper sticker implies, do not claim to be perfect and need not be so, because the state of our souls is not defined by our actions but rather by the action taken on our behalf on Calvary. Again, true enough. As the old Sunday school symbol suggests, when God looks at us he doesn’t see our sin but rather his Son. I still remember having this image driven home to me by a wonderful Sunday school teacher using cartoon characters made from felt. The lesson stuck, but oughtn’t we apply this lesson more broadly!

If we insist on seeing and defining ourselves and our ethics not by our own actions and on our own merits, do we not owe our fellow human beings the same courtesy. This would seem to be a way of saying thank you to a God who joyfully forgives our sins and removes our debts.

I do not pretend to be an expert on any religion, not even my own, so I cannot tell you about Islamic ethics or provide you with the essence of Islam. Nor can I easily characterize the followers of Islam in any sweeping manner, but I do know one thing. Muslims are not best understood by using the worst Muslims as the basis for a caricature. Let us practice the same generosity of spirit toward them as God has shown to us.

Absurdity and the Poultry Party