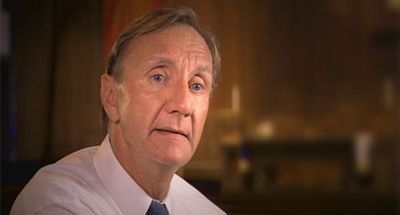 National Public Radio (NPR) listeners are generally more liberal than the American population at large, so when they tuned in to the December 2 edition of “Fresh Air” they were likely not shocked to hear a defense of environmentalism, President-elect Obama, and civil unions for same-sex couples. But many members of the National Association of Evangelicals who were listening were shocked to hear these views espoused by their own spokesman, Rev. Richard Cizik.

Cizik has worked for the NAE for 28 years, and for the last several has been something of a lightening rod, attracting the ire of conservative Evangelicals like James Dobson because of his advocacy on behalf of “creation care.“

He weathered these criticisms in part because his views on climate change and openness to fresh ideas promised to bring in the new generation of young Evangelicals. However, his December 2 comments proved to be the proverbial “last straw.” Cizik admitted that his views on homosexuality and gay unions were “shifting.” Conservatives responded by suggesting that the leadership at the NAE should shift as well.

Reaction among Evangelicals has been mixed. Many of the newly vocal Left Evangelicals are understandably disappointed, but at the same time are happy to see Cizik taking a stand. The Evangelical Right has finally gotten what they have wanted for years, though it is unclear what if any success they will have in promoting a more conservative voice to fill Cizik’s very public position. No word yet on Cizik’s plans for the future.

The National Association of Evangelicals remains the closest thing there is in the U.S. to an umbrella group encompassing all Evangelicals, so we here at LiberalEvangelical.org will keep our readers abreast of developments at the NAE.

Listen to an earlier Speaking of Faith show on Cizik and the Environmental Movement within Evangelicalism.

The Dialects of Secularization, by Jürgen Habermas and Joseph Ratzinger

Do you have Bracket Fever?