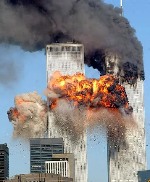 Nine years ago, two airplanes hurled into two towering symbols of American power. Nine years ago, a nation experienced unspeakable shock and immense agony. Families lost loved ones, never to return; rescue workers suffered psychological and physical trauma; and some citizens experienced the erosion of courage in light of the potential threat of suffering further physical violence. Now, in 2011, nine years and two wars, thousands of lives, and billions of dollars later, the nation memorializes the immense loss caused by those willing to express themselves through terroristic violence. Yet, memorializing is not the only mood being manifest during this time; for some, the mood of memorial has been joined with protest or advocacy.

According to the BBC on 9/11/10 hundreds of people gathered on the streets of New York City to raise their voices in support for and protest against the Islamic mosque and cultural center that is projected to be built near Ground Zero. The two antithetical demonstrations followed memorial services honoring those who lost their lives at the hands of terroristic violence. In order to protect the projected site of the mosque and cultural center, the police barricaded the surrounding streets and patrolled on horseback and with canine units. Both sets of demonstrators were confined to “pens” in order to minimize the threat of violent interaction. The demonstrations, although passionate, proceeded peacefully.

Speaking in protest against the projected mosque and cultural center was “the radical Dutch politician Geert Wilders” along with John Bolton, former US ambassador to the UN, and “other Republican commentators.” According to the BBC, Geert Wilders is known for his assertion that “Islam is comparable with Fascism.” During the protest, Wilders pronounced, “We must never give a free hand to those who want to subjugate us, draw this line so that New York will never become New Mecca.”

Theresa Angelo, a 57 year old protestor asked by the Associated Press for comment expressed the following sentiment: “This is hallowed ground. It’s something like Gettysburg or Pearl Harbour. Why did they have to do it here? Be a little sensitive.” Elizabeth Meehan, a 51 year old demonstrating on behalf of the mosque and cultural center, told the Associated Press: “I’m really fearful of all of the hate that’s going on in our country … People in one brand of Christianity are coming out against other faiths, and I find that so sad, Muslims are fellow Americans; they should have the right to worship in America just like anyone else.”

Families who lost dear ones in the violence nine years ago were also asked to comment on the demonstrations. Some of these families felt the demonstrations to be “disrespectful of their families’ loss,” while other families voiced support for those protesting against the mosque and cultural center, saying, “now was the time to speak out.”

Commemorating the day in Washington, D.C., President Obama, addressing the mourners gathered at the Pentagon, encouraged the nation to continue to recognize the distinction between religious communities and terrorists. He stated, “It was not a religion that attacked us that September day. It was al-Qaeda.” Obama also gave voice to the nation’s courage, saying, “We will not sacrifice the liberties we cherish or hunker down behind walls of suspicion and mistrust.”

The horror, profound suffering, grief, and loss wrought on that day nine years ago is impossible to express adequately with words. In times of memorial, those of us who mourn are given an opportunity to meditate on our response to tragedy – to the loss of innocent lives. Will we respond with revenge? With animosity? With hate? With bombs? With communication? With aid? With love? It also provides us with an opportunity to reflect on the violence that others have experienced at our hands. During a time of war in 1945, the United States dropped two atomic bombs on the homes, businesses, parks, schools, temples, and sacred spaces of Hiroshima and Nagasaki, Japan. In the same year and during the same war, Allied bombers firebombed the city of Dresden, Germany, turning 15 square miles of an historic city into a moonscape. Reaching further back into American history, one continues to find examples of the destruction and displacement of communities – Native Americans in the European conquest of the continent, Mexicans in the Mexican-American War, and Africans in the period of slavery. American history is regrettably scarred by violence that has been inflicted upon it and that has been directed toward others. In order to walk forward in wisdom, and to avoid repeating the tragedies of the past, we must continue to courageously confront the frightening, complex, and profound contexts that flow from violence and tragedy.

To read “Demonstrations over Islamic Centre Held in New York” by the BBC click here.

Am I my brother’s keeper?