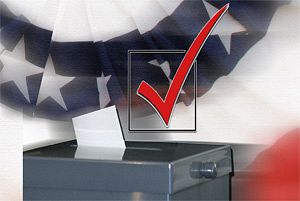 It is going to be a close one in Virginia. As Senators Obama and McCain work overtime to win votes in tossup states like Ohio, Michigan, and Virginia, some conservative Evangelical leaders are making plans to shift votes out of determinately red and blue states and into the important battlegrounds. Jerry Falwell Jr., son of the late evangelist and pastor Jerry Falwell, is asking the 10,500 member student body of Liberty University in Lynchburg, VA to register and vote as Virginians in the hope that their votes might swing the state into the McCain column in November.

The move to register Liberty University students in Virginia by listing their dormitories as their residences comes as both Senators Obama and McCain try to reach college students, a group notoriously difficult to get to the polls, in states with large numbers of colleges. Given the fact that most 18-24 year olds, when polled, favor Senator Obama, some conservatives worry that Liberty University may be inadvertently providing a road map for other universities to follow.

The fact that Liberty University leaders are canceling classes on election day, organizing to bus students to the polls, and generally working on behalf of McCain’s candidacy represents a major change in position since the 2000 election when Jerry Falwell actively opposed McCain’s candidacy and McCain famously called Falwell and the Rev. Pat Robertson “agents of intolerance.” McCain has since softened his criticisms of the late Falwell and the religious right. In May of 2006 McCain spoke at Liberty University’s graduation, appearing later on Larry King Live to explain his change of heart.

While the aims of the leadership of Liberty University may be transparent, they are officially endorsing no candidate and are not telling students who they should vote for.

Youth Study on Happy Potter and the Gospel

Liberal Evangelicals and the Realities of Ubiquitous Social Connectivity