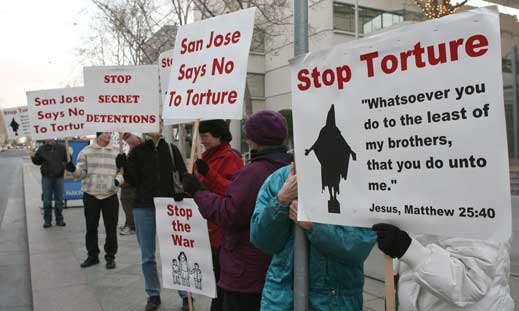 Newly empowered with the knowledge that they helped bring about an Obama victory and strengthen the Democratic Party’s position in both houses of Congress, the Christian Left and other progressive religious groups are urging President-Elect Obama to put an end to the U.S. use of torture and detentions without trial. The prison facility at Guantanamo Bay, Cuba is fast becoming a symbol of the kinds of practices that the incoming President must change.

Senator and soon to be President Obama has made it clear that he intends to close the facility at Guantanamo Bay, used to house enemy combatants from the war in Afghanistan, but as with the U.S. presence in Iraq, setting a timetable for withdrawal and closure will be a more complicated matter. Religious organizations such as the National Religious Campaign Against Torture are hoping that the speech delivered by candidate Obama in September in which he denounced the use of torture as “undermining those very virtues of America that will lead us to success in winning this war [the “war on terror”],” will be followed by actions on the part of President Obama.

Executive orders cannot be changed overnight and it will take some weeks or months to change military detention policies, but critics and religious groups on the Left will be watching the new administration’s handling of Guantanamo in the first few days following the inauguration on January 20, 2009, hoping to see a sign that the voices of “values voters” on the Left are being heard.

A Great Winter Read: Steven Miller’s The Age of Evangelicalism