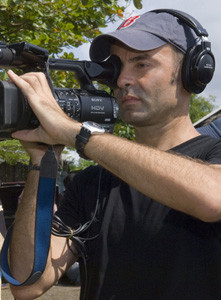 WBUR’s “Here and Now”, with Robin Young, recently produced a story on “Waiting for Armageddon.” This new documentary shows the way American fundamentalist evangelicals understand their beliefs about the approaching end of days in relation to contemporary events in the Middle East. Young interviews Franco Sacchi, filmmaker in residence at the center for digital imaging arts at Boston University and co-director of the film (pictured at right).

The discussion opens by mentioning that evangelicals are not hoping that the world gets better, but are instead waiting for Armageddon. They see the current turmoil as indicating that the end times are near.

One current example of this point relates to the speech given by the current Catholic Pope in Israel. The Pope called for an “independent Palestinian state,” which stirs up dust in the American evangelical community. According to Young, “about a quarter of Americans are evangelical Christians and they hold a wide range of beliefs, but [this] new documentary focuses on the millions of evangelicals who see biblical prophecy unfolding in current world events.”

Young states that these beliefs include “the rapture (the belief that faithful Christians will be snatched up and meet Christ in the air), the tribulation (the hell on earth that follows below), and the final battle, Armageddon, which will be staged from land that must be in the hands of the Jews or their allies – land in the middle east, and in Iraq. And they believe that Armageddon is coming soon.”

Clips of some of the evangelicals in the film are played on air. These clips reveal just how seriously the end of times and Armageddon are taken. Here’s an example: “Do I believe that I will hold a grandchild? No. Ah, I just don’t think we have that much time.”

Sacchi explains that one of his primary reasons for making this film is the important part of the U.S. culture played by the evangelical movement: “If someone asked me today, ‘in America what is one of the most interesting phenomena on the political and cultural landscape,’ I would say that if you really want to understand America in our age, you really have to take a look at the evangelical movement.”

In the film evangelicals are able to discuss their beliefs, for example, their literal reading of the bible. They think that because the Bible mentions horses in the final battle, there will literally be horses involved, and that a literal “blast from Christ” will kill the “attacking army, but not the Jews.” The Bible is like a “map” or “code” for them. Indeed, they believe that Jesus Christ will literally come back with a sword on his side to judge the world, and that the Christians will be fighting with him. Evangelicals speaking in film elucidate this point: “We’re gonna be behind him with, I believe, swords in our hands and, we’re gonna be his army. In this battle, the blood from this battle will be as high as a horse’s bridle – it’s just something mankind has never witnessed before.”

Israel and Jews are another significant aspect of this film. Sacchi states that “the film ultimately focuses on the relationship between the evangelical movement and the Jewish people and one of the characteristics of the evangelical is to put at the center of their theology Israel and the Jewish people, because they still have a role. For them it’s absolutely critical to support Israel as part of their theology.” Why? Young adds, “because they see Jews as God’s chosen people.”

The film presents the extreme biblical literalism of fundamentalist evangelicals as the root issue lying beneath these expectations for the future. For example, based on an interpretation of scripture, the Antichrist is believed to be a person who will sign a peace treaty with Israel. For this reason evangelicals would “oppose any peace process that would imply a two-state solution because that would be absolutely against the prophecy”; such a solution would make it more difficult for the Antichrist to arise.

Sacchi is clear that he did not make this film in order to attack fundamentalist evangelicals or biblical literalists. Rather the film is a documentary made in hopes of engaging the fundamentalist camp of evangelicalism. In fact, it was the concept of following a group of evangelicals around Israel and recording their comments about historic landmarks that gave birth to this documentary. The Dome of the Rock was one such landmark. Here the sacred Muslim mosque sits, but the Jews believe that their temple will return to the same spot.

Evangelicals believe that Israel must control that land for the biblical prophecies to come to pass. Young states that evangelicals “back the Jews in their hope that a temple will return to that site so fervently that you hear evangelicals tell you that the mosque must go.” Then she presents excepts from the film documenting the fervent evangelical hopes. “I don’t know exactly how it’s going to be removed but it is not part of the end times as far as the Bible or Christianity is concerned and I don’t think Judaism either; there’s no place for that mosque. It has to be removed.” Again, “The Dome of the Rock will somehow be done away with. I have no idea; there’s been plenty of earthquakes up there, that can solve it. I kept hoping one of Saddam’s missiles would find its way over to the dome.”

The film points out that this contested site, which is where the first Jewish temple also stood, is believed to be the place where Christ will return. The film even shows a Jewish tour guide asking one of the evangelicals to talk more quietly when he was loudly talking about the Temple and the end of times while walking nearby.

Evangelicals also believe that the current war in Iraq is part of Bible prophecy. This conclusion follows from identifying contemporary Iraq with the ancient biblical civilization of Babylon, which flourished in the same region. The war is believed to be one stage in a complex series of events that fulfill the Bible prophecies.

Sacchi is careful to state his opinion that extreme religious fundamentalists are the problem, not the sheer fact of different religions. He says, “I really think that the real divide in this moment is not between the Christian and Muslims, it is between fundamentalists and moderates on each side.” He stresses that not all evangelicals think like those in the film. The extreme believers depicted in the film are trying their best to read the Bible literally, looking for a Utopian ideal, and “Waiting for Armageddon.”

“Waiting for Armageddon” will be released this coming fall. Visit the official website for this film. The “Here and Now” episode discussing the film is here.

The Dangers of Evangelism