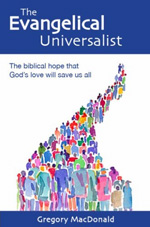 Is Christian orthodoxy compatible with belief in the ultimate redemption of the whole human race? MacDonald’s The Evangelical Universalist claims it is possible for an orthodox Christian to hold Christian universalism. This book is an attempt to examine this important theological issue within the framework of “evangelical universalism.” The book is divided into seven chapters with an introduction and appendices.

Christ is central to the author’s theology, and he argues that salvation, finally, depends on one’s faith in the person of Christ, and that in the end everyone will be saved through Christ including those who are in hell. The book begins with an autobiographical note on the author’s conversion from the mainstream view of the church to Christian universalism, and he lays down his own reasons for his thesis in the book. He argues that the teachings of the mainline Christian traditions about hell – such as the theory of retributive justice, teachings of Calvinism, freewill theism, and open theism – are philosophically problematic. He holds that they are incompatible with reason, and that Christians have failed to understand the biblical theology about the ultimate destiny of humanity. Employing reason in interpreting the biblical doctrine of hell, MacDonald believes that Christian universalism is a viable means for understanding what the Bible teaches about hell.

MacDonald underlines the need to re-read the Bible using reason “informed by the self-revelation of God testified to in the Bible” (35). He believes that Christian universalism is biblical because he finds it is supported by the scripture, and it is not in conflict with the explicit teachings of the Bible “such biblical doctrines as salvation by grace, through faith in the atoning work of Christ, as well as individual texts on hell” (36-37). The author begins his examination of biblical theology with the Christological passage in Colossians, where he finds a strong case for universalism’s “natural interpretation of the reconciliation of the cosmos” (48). In this vision for universal reconciliation, the cross becomes central, and it also takes sin seriously.

An important aspect of the book is the author’s attempt to unearth the universalistic dimension of salvation in the Old Testament and the New Testament in chapters three and four. Interestingly, he begins by weaving the story of Adam into the story of Abram/Israel, where he builds a typological analogy between the two stories, and argues that the story of Adam was “shaped to prefigure Israel’s own story” (58). He identifies in the choosing of Abram, and later in the choosing of Israel, God’s greater purpose of saving all the people of the world. He persuasively argues that Israel was chosen to bear witness to Yahweh, to bring other nations to faith in Yahweh. But Israel failed to fulfil this mission through her disobedience. Yet God restores Israel (from exile) through the Servant in Deutero-Isaiah who embodies in himself the suffering and the restoration of Israel. The story of Israel is representative of nations whose salvation is mediated through the Servant.

Continuing his search for universalism into the New Testament, the author knits the Old Testament story of Israel together with the story of Jesus who is portrayed as fulfilling the calling of Adam and Israel. Jesus becomes the representative figure of Adam and Israel – “the second Adam and the new Israel” who, in his death and resurrection, brings salvation/restoration to all, including Israel. This claim for universalism, the author seeks to establish through a detailed exposition of the Pauline texts of Romans 5:12-21 and I Corinthians 15:20-28, and Romans 9-11 where the future salvation of all Israel is tied up with the salvation of all humanity.

In the fifth chapter, the author seeks to defend, exegetically, universalism in the book of Revelation, what he calls “the pilgrimage of the nations” to final redemption (106). His claim is that nations who are judged by God for their sin and rebellion in Revelation will ultimately be redeemed. This claim is further substantiated by his interpretation of Revelation 21:23-27 where he argues that the gates of New Jerusalem “will never be shut,” but are open ever for the entry of nations/people (“the lost”), who have been already damned in hell. Thus, for the author, the greatest landmark of eschatology is the repentance and redemption of the damned nations, the lost ones. This, further, he establishes where the gates remain open for anyone to “come” in Revelation 22:14-17.

Chapter six deals with the hell texts in the Bible, particularly in the New Testament, which seem to question the universalism claims. While not undermining the importance of such texts, the author believes that they “warn of a terrible but temporary fate” (p. 135) of humanity, and that the ultimate goal of the Scripture is the salvation of all. He does not rule out the judgment of God, both present and future judgments, but maintains that the judgments are redemptive, reformative, and restorative.

About Jesus’s teaching on hell, the author believes that while there is ambiguity about hell, nevertheless, he finds Jesus’s teachings do not “contradict universalistic claims” (145). Similarly, he does not find any clear teaching on hell in Pauline letters. Whatever references one might find in Jesus and Paul for hell, he argues that they refer to “a terrible and temporary fate” (155) – namely, a terrible damnation in hell which does not last forever.

Finally, the author describes the advantages of universalism. He claims that universalism can offer a more plausible explanation about the question of evil. It can hold together divergent theological positions (such as divine sovereignty and human freedom) and “produce a more coherent Christian theology” (162). Christian universalism is able to see the Church as “a macrocosm of all humanity that will be ultimately reconciled to God in Christ and to each other” (167). Christian universalism can offer hope when one is confronted with the ultimate questions of life and of death (172-3).

Undoubtedly, The Evangelical Universalist is a compelling book, and MacDonald’s arguments for Christian universalism are very persuasive. The book raises several crucial issues which cannot be easily set aside. Is the punishment of the human soul for an unending time span, through all eternity, for the sin he/she has committed in a short span of his/her lifetime compatible with the love and justice of God? How does one understand divine justice, if finally the unrighteous are saved along with the righteous? If we concede to the universalistic claims, what about the just and the righteous who live under spiritual and moral disciplines? If all are ultimately saved, what advantages have the righteous over the unrighteous who will also be ultimately saved? Or is it possible to think that in punishing the unrighteous for their sin and rebellion in hell, God’s justice is fulfilled, and in his redeeming them ultimately, his love is established?

The book does not provide unambiguous answers to these questions. However, the author delves deeply into the Scripture, mainly in the New Testament from where he adduces crucial texts in an attempt to substantiate his arguments for Christian universalism. He seeks to put forward his own interpretation in support of his position through careful exegesis and analysis. He engages with the important theological issues and the biblical testimony about the important doctrinal themes, such as grace, love, sin, and salvation. This book reflects the author’s own struggle, on the one hand, to hold his evangelical conviction and Christ-centeredness, and on the other hand, being open to Christian universalism. One might wonder if this struggle is echoed in the author’s use of a pseudonym under which the book is published.