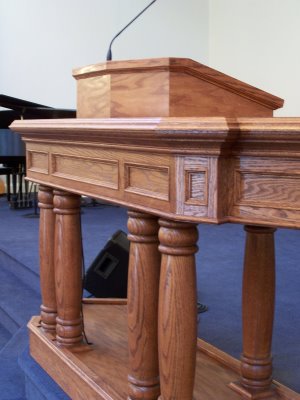 When he was running against President Carter in 1980, then candidate Reagan stood before a group of Evangelical leaders at The Religious Roundtable’s National Affairs Briefing and uttered the famous line, “I know you can’t endorse me, but I endorse you.” At that moment he galvanized evangelical support and went on to establish lasting ties between the Republican Party and the religious right. Today, the rules regarding pulpit endorsements are being challenged. The Alliance Defense Fund (ADF) is working to overturn IRS regulations that prevent ministers or leaders of nonprofit organizations from endorsing candidates or supporting political parties.

The prohibition against endorsing candidates from the pulpit is written into the IRS code, penned in 1954 and updated in 1986. Pulpit endorsements are not illegal per se, but they do threaten an organization’s tax exempt status. In order to challenge the legality of the IRS code the ADF is organizing clergy in several states to participate in “The Pulpit Initiative.” The exercise’s goal is to prompt the IRS to move against the churches whose ministers have endorsed candidates so that the actions of the IRS might be challenged in court. The ADF has a team of lawyers ready to pursue potential cases all the way to the Supreme Court. Clergy and religious leaders both inside and out outside of the Church are rallying to oppose the ADF strategy and protect the integrity of the pulpit. Americans United for the Separation of Church and State has launched an affiliate website called Project Fair Play in order to oppose the efforts of ADF to inject politics into the churches.

Read more about this developing story at The Washington Post.