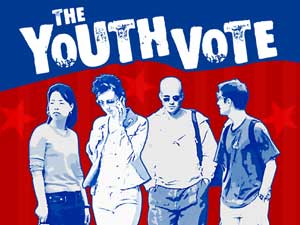 If we only counted the youth vote (read: the potential votes of those who didn’t come to the polls this past election day), the Democrats would have laid a solid whoopin’ on the Republicans. Oh, but that’s a big “if.” The data is as frightening as it is clear. Young folks clearly prefer Liberal politicians and policies, they just don’t prefer them enough to make the trek to the polls. Weary Liberals everywhere knit their brows and turn to the young and ask, “WHY?”

The young don’t vote. It’s a dependable fact. And so politicians see no real need to listen or pander to the wishes of the young. “Get back to me,” they argue, “when you’ve got a mortgage, a few kids, and a reliable record of turning out on the first Tuesday after the first Monday in November.” If the youth of this country would vote, Liberals would almost always win. So why don’t they?

The world is full of professional pollsters who can answer the above question better than I, but I do see some common trends in youthful behavior that lead simultaneously to low voter turn out and low church attendance among the young. Young folks (I guess I’m beyond that category now, sigh.) tend to see only immediate consequences and insofar as politicians and churches deal in distant benefits and delayed gratification, the young are having none of it.

Evangelical churches, and I’m talking here about both Conservative and Liberal Evangelical churches, are full of young people. Despite the hype, I doubt it’s all due to the influx of good coffee, pop-song-worship, and stadium seating. Rather, I think it has more to do with the fact that young people (let’s go with the pre-30s definition for the moment) are less likely to make decisions based on the distant future (i.e. life after 30). Young people engage more readily in behaviors that have long-term risks like smoking and tanning (John Boehner being the obvious exception to this rule.) and are less interested in long term goals like retirement savings and paying off a house.

Don’t misunderstand me. I’m being descriptive here not prescriptive. I don’t think there is anything wrong with young people living like young people so long as they stay out of my azaleas (he says shaking his fist in anger)! Young people go to church to meet other young people, and to get immediate spiritual results. They are not necessarily in it for the long haul, and that’s fine. However, this tendency to think of immediate benefits and drawbacks and to ignore possible long term gains and targets that may take years, decades or generations to achieve…this tendency should warn Liberals about something. If we don’t do a better job in politics and in our churches of emphasizing the immediate benefits of our mission, we will continue to lose, if not the hearts and minds of the young, at least their votes and their active participation. Allow me an anecdotal illustration.

The church in which I once served had a missions budget that was divided among many different missions organizations and projects. We gave (metaphorically) drops at a time to many different rain barrels, knowing that these barrels would only be filled with the active participation of hundreds of other congregations. The rewards are real, but they are abstract. The ultimate goal of ending hunger and abuse and poverty is admirable but vague in the sense that the congregation never saw the faces of those they helped. A full barrel brings with it a kind of spiritual and psychic satisfaction that distributing a barrel’s worth of drops among a thousand barrels does not. Older folks who are used to writing monthly mortgage checks, who are used to seeing that Social Security total contribution go up over the years, these folks can handle the long slow slog that MLK Jr. referred to when he noted that the arch of history is long, but it bends toward justice. But young folks aren’t inspired by long arches!

When I tried to get our young congregants excited about missions giving, I had to steal a page from the playbook of the Pentecostal Assemblies of God. The church I grew up in gave out yellow plastic “Buddy Barrels” to all of the kids. Our job was to fill these barrels with change and then return them to our Sunday School teachers who would collect them and send them to the central AG missions office. The brilliance of this strategy was that the young people (me) never saw the huge metaphorical barrel that sat in the central offices in Springfield Missouri. We saw only the small pint sized barrels and we were able and willing to fill these to the brim with nickels and pennies: immediate reward! When I launched a new missions giving campaign at our Liberal church, I wanted to get the young folks excited, so I chose an intermediate sized barrel–water cooler jugs–and had teams compete to fill them with change. The church could literally see the progress week to week and in two months we raised $8000.00 in change! A drop in the larger bucket, but when we had to have three strong men break a sweat to wrestle the full barrels into a truck for a trip to the bank, the tangible rewards were obvious.

Doubtless, there remains a religious and political enthusiasm gap in our country as the media has rightly and repetitively noted these past weeks. But I think it’s a mistake to see this as a gap that is driven by ideology–angry Conservatives against passive Liberals. This is only one element. The enthusiasm gap between the older long-term thinkers and the younger short-term thinkers is more concerning to me. So what, as Liberal Evangelicals are we to do? Maybe we should take some of the advise that so many pundits have been offering President Obama lately: Stop being professor in chief, stop giving academic lectures, and INSPIRE people. Break out the small barrels and show young people immediate results. Get comfortable with the idea that Evangelicalism is not just about some distant future heaven, nor is Liberalism merely about some realized social utopia that lies centuries in the future. Our ideas and communities have consequences and should yield fruit here and now as well. Look again at the third line in the last verse of the Evangelical classic, “Great is thy Faithfulness.”

Pardon for sin and a peace that endureth
Thine own dear presence to cheer and to guide
Strength for today, bright hope for tomorrow
Blessings all mine, with ten thousand beside

Until we can preach the “and”, the young will continue to lack enthusiasm.

Christianity for the Rest of Us, by Diana Butler Bass