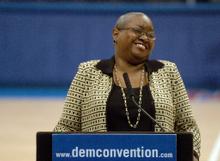 Leah Daughtry may not be a name that rolls off the tongues of casual observers of politics in the U.S. but political junkies know her as the CEO of the DNC’s 2008 National Convention and a close aide to DNC chairman Howard Dean. What many of these politicos do not know is that Daughtry is a Pentecostal minister and a staunch supporter of religious communities.

As the 2008 election heats up, Democrats and Republicans are fighting as never before for the votes and financial support of the nation’s evangelicals. Daughtry has been in the forefront of the charge for Democrats, working to connect with ministers and faith communities and to break the perceived Republican monopoly on faith.

Her influence and voice has stirred some controversy among some of the more secular Democrats, but her influence on several important campaigns in 2006 has caused others to give her considerable leeway. Polls showing that evangelicals and “values voters” are beginning to consider democrats in greater numbers have caused her profile to rise.

Read a recent LA Times article on Daughtry’s role in the DNC.

Read a recent article about Daughtry in The Christian Science Monitor.

Free Resource: A Study Guide on the Meaning of Jesus