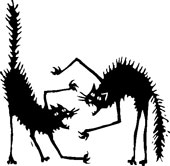 My late grandfather was a wonderful Christian servant and brilliant social engineer. All five of his children and his many grandchildren rave about him, with only one glaring exception. His kids found him tyrannical when it came to settling fights among siblings. No matter how bad the squabble, not matter the injury (real or perceived), he made them hug one another before either child could go to bed. They still talk (and even complain) about it forty plus years later. But they are a tightly knit family in part because of my grandfather’s insistence that they love one another (or fake it) despite their fights. All along he was teaching them the skill of peacemaking, though he might not have called it that. So they developed the habit of learning to live with and move beyond differences and disputes without one person or one side necessarily winning.

Blessed are the peacemakers, for they will be called children of God.

The art of peacemaking is rarely practiced, and as the fights among politicians and Christians heat up around the nomination of Judge Sotomayor, we must think about how we might make and keep the peace in our congregations. How might Liberal-Evangelicals act as moderators and peacemakers? Should we? Can we?

The rhetoric on both sides is overblown. The name-calling is appalling. The ulterior motives for opposing or supporting the nomination of Sotomayor are often barely concealed beneath the surface, and her nomination has become a field upon which dozens of proxy battles are being waged: the battle for women voters, the fight to raise funds from women’s organizations, the battle to encourage donations from pro-life groups, a test of the parliamentary powers of the Republican Senate minority, the battle for Hispanic voters, an ideological conflict between “constitutional pragmatists” and “strict constructionists.” All of these fights predate the rise to fame of this one woman, but because she’s up for a lifetime appointment to the Supreme Court her record and person become the terrain for this summer’s incarnation of these ongoing wars. And it won’t be much different in our churches.

Many of us know the feeling of sitting through church board meetings, deacon meetings, hiring committee and planning committee meetings, and we sometimes have the distinct feeling that we’ve done all of this before. We’re having the same battles over and over again. Personally, I’m convinced that there is really only one committee meeting – it’s Kafkaesqe – the faces and agenda items change, but the meeting is always the same. When an issue is raised, we all know that Jim is going to make the conservative point, then Jennifer will object, Jan will try to defend Jim but will do so in a way that obscures the real issue and makes it personal, then Stanley will try to act as mediator, but will only further confuse everyone by introducing tangential matters – and this is going to happen NO MATTER WHAT THE TOPIC OF DISCUSSION! The ways in which we fight often transcend the issues we fight about. This means that it is important for us to think about, not only the issues about which we disagree, but the manner in which we deal with disagreements.

Politicians don’t necessarily need to play nice because there are procedures and institutions in place that eventually force some kind of conclusion. Eventually thereare “yeah” and “nay” votes and elections. So someone wins and someone loses. Winners get their way and losers go home. But in our churches we must avoid this. We cannot afford to have losers. We value one another, cherish one another, and hopefully love one another. So we mustn’t think of church fights as win or lose propositions because when we do so – pardon the hackneyed expression – everyone loses.

Eventually the hiring committee must make a decision and pick a candidate. Eventually we have to decide on what color to paint the fellowship hall. At some point debate must end and the bulletins must be printed on either the tan or the canary paper stock. So as a matter of fact, one position must prevail while another suffers defeat. The real issue is, how then do we move out of the conference room and into the sanctuary?

How can I worship beside the moron who thought we should paint the fellowship hall pink?

How can I let that woman teach my kid’s Sunday School class when she insisted that we hire the clearly inferior candidate?

How can I pray while holding the hand of the idiot who thought that our bulletins should be on 3×5 card stock?

But all humor aside, let’s cut to the point: How can I serve next to a person who defends infanticide in the name of medical privacy? Can I pray beside a woman who wants the government to interfere with women’s bodies? Can I trust someone to teach my daughter who doesn’t trust women with their own medical decisions? Can I sing hymns next to someone who works for Planned Parenthood? Can I study the Bible with someone who volunteers for the local Republican Party?

These are the real questions that plague so many moderate Christians. I emphasize that they plague moderates, because for many Liberals and Conservatives the questions lead to simple answers. It is the moderate Christian who finds him or herself unable to offer a decisive answer. And that is the conundrum presented by a watershed event like the nomination of a potential Supreme Court Justice. Such an event forces us beyond relatively superficial disagreements over landscaping and music styles and makes us confront our deep disagreements. And these disagreements are frequently emotionally, spiritually, and politically charged.

Abortion, gay marriage, torture, and the death penalty are emotionally charged, so we fight and feel passionately about these issues. But there are moderate Evangelical Christians on both sides of each of these issues. I love my mother, but would likely differ from her on three of the four hot button topics above. My wife and I diverge on two of them. Honestly, I can’t quite make up my mind on at least one! So, many of us know with certainty that we cannot villainize those Christians who come to different conclusions.

Ok, so you’re likely thinking at this point, “Well fine genius, then do you really recommend a “let’s hold hands and get along” approach?

No, of course not, because just as the last thing I feel like doing with my wife when we’re in the middle of a fight is holding hands and pretending that we aren’t fighting, the last thing we should do is pretend that moderates don’t have deep differences. The question is, how do we avoid mirror image errors? Error #1: pretend we don’t disagree. Error #2: allow our disagreements to define our entire relationship with one another.

How about some modest suggestions?

It seems to me that a likely first step is to avoid caricatures. And we need to do this in an active rather than a passive mode because caricatures abound and they are too easy to absorb if we aren’t actively working to counteract them. So I recommend the following exercise. Pick one of the hot button topics above, one that you feel strongly about, and see if you can construct the best possible argument for the opposite position. I don’t mean that you should work on sharpening your rhetorical skills, but rather, think long, hard, and honestly about what it is that leads other moderate Evangelical Christians to an alternate conclusion. Are they really just blind, stupid, unpatriotic, bloodthirsty, morbid, and/or imperious? Or, might they struggle with some of your concerns and simply have a different understanding of how to balance many of the competing values that you share?

Second, go to church! The factious questions I posed about asking how I could worship with the moron who wanted to install drop ceilings in the fellowship hall, they all contain their own solution: worship with him, sing with him, pray with him, take communion with him. It is difficult to hate or belittle someone you pray for and worship regularly beside.

Third, refuse to be a passive spectator and do not allow yourself to be counted as a partisan. That sounds like an odd thing to say until you pay attention the ways in which reports characterize religious people and note the too simple options included on many surveys and opinion polls. If I were asked whether or not I’m pro-life, I cannot give an honest answer because I know the kinds of assumptions that come with either a straight-up yes or no and neither group of assumptions is true for me. It is just easier for media outlets, politicians, denominational leadership, and even local ministers to assume that the Christian world can be carved neatly into pro-choice and pro-life camps. When we passively acquiesce to being so characterized, we perpetuate the myth that both extreme Liberals and extreme Conservatives so cherish. We allow a lie (a convenient lie!) to stand for the truth. Perhaps we can best fight this by refusing to accept the terms of the debate. Refuse to answer the question, “Are you pro-life or pro-choice?” Stand up to leaders who make sweeping statements about “What Christians think” or “What the Bible says.” Question reporters and write letters to the editor when they lump all Christians into one group or all Liberals into another. Demand nuance. Demand accuracy. Demand a true account.

Finally, guard your heart against idolatry. Idolatry is just a fancy theological term for permitting any finite thing or concern to replace God. When we allow any debate, any issue, or any concern, no matter how important, to replace God as witnessed to in the Gospel of Jesus, we succumb to idolatry. It may not seem like a sin – we’re not talking about a golden calf here – but allowing even something as momentous as debates about abortion, execution, torture, and gay marriage to stand in for the Gospel is idolatry. So let’s work on keeping our priorities straight.

The battle over Sotomayor will rage all Summer. Let us hope that in our churches we will have the focus and courage to remain attentive to our ultimate divine call.

How can Liberals “MAKE” our kids go to church