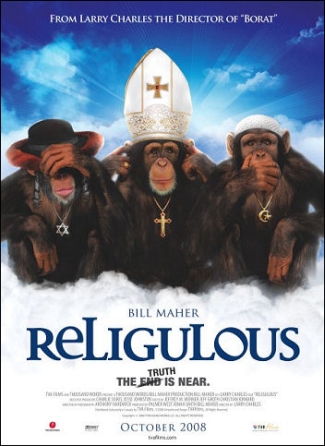 Just saw Religulous… ok, I admit that I laughed. To say otherwise would be like Clinton claiming to have smoked it but not inhaled. I laughed a bunch because frankly we religious people are a funny lot and do many things that are worthy of ridicule and laughter. One of the things that differentiates much contemporary Evangelicalism and especially Liberal Evangelicalism from our traditionalist and Conservative forbearers, who opted for Fundamentalism, is that we are not as woodenly earnest about our religious lives.

The movie is worth seeing if only because all Liberal Evangelicals need to know about these sorts of cultural pieces on religion. I think I can predict the reaction among conservative Christians, Jews, and Muslims. Each group will be offended by what Bill Maher says about them, but they’ll simultaneously revel in the fact that he socks it to the other two groups. Take what you will from that observation.

However, I also think that, for moderate Christians, it is one of the most important films that has come along in years. If you distill Maher’s movie down to its essence it is an argument directed squarely at us. Maher isn’t the first to make this argument, Christopher Hitchens and others have made it before, but, thanks to his popular HBO show and stand-up comedy career, Maher has a much larger audience to which he can make his case. Here is his argument in bullet points.

This argument isn’t terribly new, and I can agree wholeheartedly with the first and third points, and will begrudgingly agree with the second point. I will not, however, concede the final point because I think it makes the mistake of treating all religious people as religious fanatics. If he were to suggest that the world is better off without religious fanatics then I would concur.

Oh, but wait. Maher is actually a couple of steps ahead of me, because he anticipates this reaction on the part of the vast majority of religious people who don’t molest children, cluster bomb villages, and build car bombs. Most religious people, according to Maher, aren’t particularly evil, we’re just happily delusional. No harm, no foul. Except, he suggests that we inadvertently cause harm and should be flagged for a foul because in so far as we lend plausibility to the basically implausible (wine = literal blood, wrestling with angels, talking snakes, flying prophets) we provide cover for murderous fanatics who count themselves among the believers. We moderates are the moral equivalents of kindly slave holders who didn’t beat, mutilate or rape their slaves. By our very existence we provide a kind of apologetic cover for those slave holders who did all of these things. Uncle Tom’s Cabin begins with Uncle Tom living as a slave to a generously paternalistic family, but unfolds as his conditions and owners worsen each time he is sold and bought. Moderates, both Maher and Hitchens argue, are the moral equivalent of nice slave holders or sympathetic Nazis. We are the public face and voice, perhaps unwittingly, of a movement whose inner core is murderous, corrupt, and insane. Thus the film ends with a surprisingly subtle argument, though it is delivered in a kind of monologue that may cause many viewers to miss the point. Maher has given voice to the most potent criticism of religious moderation that I know of: we are enablers.

If you’re looking for an attempt at refutation, stop reading here. Others have gone in that direction, but I won’t

Part of me wishes that the movie weren’t so funny because I fear that the humor may dull the edge of his critical point. Part of me thinks that synagogues, temples, mosques, and churches should be watching this film and wrestling with its accusations. Part of me wants to spend several pages dissecting and analyzing Maher’s arguments looking for loop holes and unwarranted logical leaps. There are already plenty of counterarguments and counterattacks out there. So I suggest instead that we just sit on it for a moment. Let’s take his argument at face value and allow it to percolate and ferment for a while. Let’s not rush to defend ourselves and hastily construct argumentative walls and moats to keep out the tendrils of doubt. Instead, let’s sit with this argument for a bit and see what it does to us.

Might it make us more humble? Might it cause us to turn our attention inward toward the planks in our own eyes and tares in our own fields? Might it cause us as Evangelicals to rethink the target of our evangelism? Might we need to evangelize those Fundamentalists who’ve become fanatics and share again with them the Good News of Jesus? It may sound strange to say it, but it may be that the people most in need of hearing Christ’s message of love, hope, and salvation are those who are most ardently claim to be Christ’s messengers and hands on earth. With Christian missionaries on every continent and in nearly every country, Moderate Evangelicals may need to ask difficult questions about the kinds of mission fields that remain. Where is Christ’s message least heeded and most needed? Where do we see Christ proclaimed by name and on placards, even as his actions and teachings are ignored? Where is his overwhelming love absent and left without a public witness? Might these be the mission fields of the twenty-first century?

Catholic Discussion Board Blog on Religulous

Plugged In Online Blog on Religulous