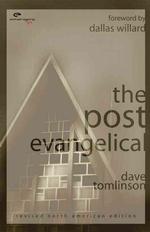 Are you a discontented evangelical? Are you somehow left dissatisfied at the way evangelicalism as a movement has influenced your faith and Christianity? If yes, then this book is for you. If no, then read it anyway because it touches on issue salient and contemporary to the liberal-evangelical conversation.

Dave Tomlinson authors an accessible work to both scholars and laypersons alike on a branch of Christianity that has emerged historically from the roots of a salvific orientation and continues today as a centrist theological lens for many Christians. Tomlinson is the vicar of St. Luke’s Anglican Church in North London and founder of “Holy Joe’s,” an unconventional church that meets at a London pub.

Tomlinson offers two editions for seemingly two different audiences. The first edition was published in 1995 and subsequently gained popularity which in turn facilitated a second edition for wider publishing. Although the book reviewed here is a North American revision of a U.K. edition, Tomlinson states a disclaimer in the introduction that admits an inherent bias in his survey of North American evangelicalism. Tomlinson states, “America and Britain share an enormous amount in common, but regular visits across the pond have taught me that our religious situations are far from identical” (19). This book, as mentioned in its introduction, “is, in fact, a pastoral essay directed at those who experience this impulse, people who struggle with restrictions in evangelical theology, spiritual and church culture – yet still desire to pursue their faith journey” (15). It is Tomlinson’s ardent task to critically engage evangelicalism as a movement and address some of its deficient qualities. He also seeks to describe a new, non-traditional evangelical type that has emerged as a result of disappointed evangelicals and provide an apologetic for a post-evangelical Christianity.

The book is organized in ten chapters, each challenging a range of traditional evangelical views from a post evangelical perspective. At the same time, it attempts to revision evangelicalism in light of an emerging post-modern perspective, hence on one level it is aptly coined “post-evangelicalism.” While this attempt does not exhaust his revision of evangelicalism, Tomlinson tries to reinterpret it in a post-modern context in order to suggest differing interpretations and “alternatives to evangelicalism-as-usual” (23). Operating within three distinct, yet fluid sections of Tomlinson book, his arguments start as a post-evangelicalism apologetic then moves toward a critical reinterpretation of both historical and current images of evangelicalism. Structurally, the book has an interesting format. The book is littered with informative boxes of text on topics of interest. They serve as a commentary from different authors placed in the margins, not unlike an endnote or a footnote. It serves two functions; first, as juxtaposition, it offers criticism and commentary to Tomlinson’s views and second, allows the reader to feel as if in the middle of a conversation that expresses a range of helpful explanations. While the text-in-text format might seem novel, his writing is, however, reminiscent of listing to a homily in sermonic form. In accustomed fashion of a pastor, Tomlinson incorporates homely examples from personal experience to make his arguments as well as issues within contemporary evangelicalism more relatable to his audience.

As argued by Tomlinson, evangelicalism is a coalescence of middle class values and Christian standards. The thrust of the third chapter is then to analyze sociological dimensions of the evangelical movement. In two parts, Tomlinson presents a post-evangelical counterpart to the muddling of evangelicalism and middle-class family values. In example, the traditional view of cohabitation is generally disfavored by the evangelical community. Post-evangelicals, however, want to disassociate themselves from this traditional view and offer an expansive image of couples that include space for committed, yet unofficial relationships. Tomlinson states, “Marriage is evolving in our society, and it is clear that whether people have or have not cohabited prior to a formal marriage does not guarantee successful future for a relationship” (50).

While chapter 4 focuses on sociological dimensions of evangelicalism, chapter 5 focuses on the various stages of growth within a Christian’s religious development. Claiming that “evangelicalism-as-usual” is akin to a Christian that is stuck or satisfied in the early and immature states of spiritual development, Tomlinson argues that post-evangelicals desire a Christianity that is more advanced. Here, Tomlinson calls for an authentic growth out of a “child-like” mentality that seeks superficial satisfaction of one’s spiritual hunger, towards a post-evangelical renewal of the mind that is both inquisitive yet fulfilling of intellectual pursuits. Tomlinson adds further, “One final element we should expect of the renewed mind is that it be holistic. Renewed minds make emotion, intuition, and mystery equal partners of rationality” (67). In the process of defining the characteristics of post-evangelicalism, Tomlinson also desires to defend it from being labeled as liberal. Staunchly against a superficial interpretation of scripture as practiced by evangelicals and also vehemently opposed to an over confidence in rationality as espoused by fundamental liberals, Tomlinson argues that they both contribute little to today’s post-modern context. He uses the difference in hermeneutics between evangelicals and liberals as merely an example to say that evangelicalism and liberalism as a whole are essentially “two sides of the same coin.” Tomlinson’s argument is essentially that, “both evangelicalism and liberalism are rooted in modernism, which is why post-evangelicals oriented to postmodernism don’t feel comfortable with either option.” Stated differently, Tomlinson argues that both views are based on a modernist approach, stemming from an eighteenth-century Enlightenment push for demythologization, critical scholarship and the triumph of reason (77). Chapter 6 is then the answer for dissatisfied post-evangelicals that want to hold on to their evangelical roots yet be open-minded towards deeper understanding. It is within the backdrop of post-modernity that a reinterpretation and post-evangelical perspective emerges. Often quoting from Walter Brueggemann’s assessment of post-modernity, Tomlinson stats “Postmodernity requires of us nothing less than the deep interrogation of every breathing aspect of lived experience” (87).

Chapter 7 is an espousal of a natural conclusion that stems from a post-modern framework of truth. Tomlinson states, “Influenced by our culture’s shift from a modern to postmodern mindset, post-evangelicals are less inclined to look for truth in propositional statements and old moral certitudes and more likely to seek it in symbols, ambiguities, and situational judgments”(94). Starting from the meaninglessness of language as declarative of an objective truth, used similarly in fashion to the philosophical device of deconstructionism, Tomlinson recognizes the complexities inherent in any God-talk and admits that faith becomes integral towards any understanding of truth. Also, he pushes for a critical realist perspective that can affirm transcendent realities by way of metaphorical language. In essence, it is through symbolism and metaphors that one is capable of grasping an approximation of truth about God. He concludes by borrowing from Ian Barbour’s book, Myths, Models and Paradigms, and describes three tensions a critical realist must embrace: 1) a combination of faith and doubt, 2) a combination of commitment and enquiry, and 3) a combination of confession and self-criticism (103-104).

The last two chapters focus on a more practical discussion of post-evangelicalism. It answers the question, “What does post-evangelicalism look like?” If length is an indication to the importance of a topic then a whole chapter devoted to a discussion on the distinctive approaches to the Bible says that it is an immense issue. Tomlinson takes the vantage point of a post-evangelical and tackles conflicting issues surrounding the Bible as truth. Some of these issues include the biblical inerrancy debate, about which at one point he states, “If I have conveyed the view that the inerrancy debate is a waste of time, that’s pretty much how I see it.” He calls for a post-evangelical perspective that interprets the “word of God” as both in essence metaphorical and symbolic. Contributing to his argument is also an admission of how the “word of God” can be experienced through the limited human perspective. He recognizes a need for faith and imagination as necessary tools for trust in a symbolic and metaphorical interpretation of the “word of God.” He summarizes, “we can say that the Bible is God’s word provided we recognize that the ‘word’ is an event mediated by the Bible and not the book itself; if post-evangelicals fail to approach Scripture in this composite manner [both critical and imaginative] they will either slip back into a sense of certainty which so often dogs evangelicals or into the chilly wastes of liberal objectivism – or worse still, into ex-Christianity” (120). The last chapter concludes the book by charging the post-evangelicals to move towards a positive engagement of the world. It seeks a relationship with the world that stands on the posture of solidarity and not on fundamentalist separation. Post-evangelicalism becomes, for Tomlinson, a paradigmatic shift in Christianity for the new post-modern age.

Dave Tomlinson’s The Post-evangelical is a most welcome and needed work on an emerging movement of people distinctly shaped by their evangelical tradition. Post evangelicalism, as argued by Tomlinson, consists of a group that remains evangelical in essence yet admittedly post-modern in thinking. The book succeeds in acting as an articulate voice for the relatively quiet yet growing group of unconventional types dissatisfied with their traditional evangelical beliefs. But its success can only be measured alongside its weakness. The limitation of this book is precisely where its agency to the evangelical movement outside of a western worldview stops. With that said, Tomlinson’s assessment of evangelicalism within a western context is not foolproof. In other words, the arguments should not speak for evangelicalism globally, as it pretends to do in such broad generalizations. Especially in regard to chapter 2, his choice of Joseph R. Myers as an authority on North American evangelicalism is presumptuous. His credentials as an authority on evangelicalism is neither stated nor questioned within the text. There is no mention of the National Association of Evangelicals (NAE) or even the World Evangelical Alliance (WEA) as a source or reference for Myer’s assessment of North-American evangelicalism. How do Myers, and implicitly Tomlinson expect authority to make such broad generalizations on evangelicalism without any reference to the two largest evangelical agencies in the world? Also, his treatment of evangelicalism and liberalism as strictly a movement stemming from modernism is a bit unfounded. There are ways of being evangelical, liberal and post-modern without feeling disenchanted about one’s modernist characteristics. If Tomlinson is to remain truly authentic to the post-modern lens, then he could not make such strict and pejorative claims, which sound eerily modernist, in some of his assessments of evangelical and liberal Christianity. In that vein, I believe that Tomlinson could benefit from expanding his views on post-modernity to include room for a modernist approach.

Although the text was easy to read and his perusals of evangelicalism relatively clear, it’s disappointing to see a book without an index or at least a comprehensive table of contents. This makes navigating the text difficult and cumbersome, especially when it is also filled with commentaries of other authors. In other ways, I thought that the commentaries were helpful yet at times redundant. Some comments were critical of Tomlinson’s arguments, but others were outright praises of his statements that added little to the conversation. Tomlinson does not make any indication in his text that his work is being printed or commented on by other authors throughout the book. This, in my opinion detracts from the effectiveness of a dialogical approach that the structure of text pretends to exhibit. Despite these critical notes, I think it was stylistically refreshing to read, especially if one is used to reading scholarly texts with footnotes. Overall it is a comfortable read for anyone that wants to get a glancing introduction to post-evangelicalism. It can be easily picked up by anyone without a strong theological or philosophical background and become comprehensible and engaging to read.

Sin and the Big Spill