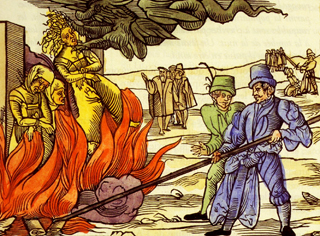 I don’t much listen to music when I run or work in the garden; instead my iPod is full of sports, science and politics podcasts. The sports shows I subscribe to are completely partisan and lean toward all things Boston, but I much prefer an ideological mix when it comes to politics. I especially enjoy the podcast from the PBS News Hour where Mark Shields and David Brooks talk over the events of the week. Last week Shields said something in regards to the various GOP candidates that I thought was quite insightful. I’ll paraphrase him here: when parties are feeling secure, they look for converts, when they’re feeling threatened they look for heretics. How true – but how odd at the same time.

I began to mull this idea over as I drove south toward Plattsburgh, New York and again and again I came up with compelling examples of this phenomenon. Shields’ point seemed to hold not only with regards to political parties, but with regards to entire religions, nations, denominations, political factions, and even individual congregations. In times of threat and crisis our deepest tribal habits kick in and rather than throwing open the gates in the hopes of building strength through coalitions and numbers, we hunker down (sometimes literally) and inspect our foxholes to be sure that they are free of traitors and atheists. There are hundreds of studies that verify this phenomenon and dozens of thoughtful commentators who try to help us think the data through and come to some kind of broad synthetic understanding of its implications. I’ll pause here to point readers toward Ara Norenzayan’s Big Gods: How Religion Transformed Cooperation and Conflict, though there are many other texts that make similar cases.

I won’t be taking us down the fascinating rabbit hole of cognitive science and the study or religion, or it’s close cousin moral psychology. Instead, I want to focus on a frightening implication of what is a well-documented scientific fact. See that bold sentence above. Look at it again from the perspective of the aging mainline churches or any shrinking congregation you might have in mind: that’s scary stuff. Because if it is correct, then by the time most congregations and denominations wake up to the fact that they’re dying, it’s already too late to save themselves. Times of crisis are those times in which we are least able to examine ourselves and the ideological boundaries that we have erected. One must make hay while the sun shines, or to use a more biblical metaphor, let’s look to Matthew.

At that time the kingdom of heaven will be like ten virgins who took their lamps and went out to meet the bridegroom. Five of them were foolish and five were wise. The foolish ones took their lamps but did not take any oil with them. The wise ones, however, took oil in jars along with their lamps. The bridegroom was a long time in coming, and they all became drowsy and fell asleep.

At midnight the cry rang out: “Here’s the bridegroom! Come out to meet him!”

Then all the virgins woke up and trimmed their lamps. The foolish ones said to the wise, “Give us some of your oil; our lamps are going out.”

“No,” they replied, “there may not be enough for both us and you. Instead, go to those who sell oil and buy some for yourselves.”

But while they were on their way to buy the oil, the bridegroom arrived. The virgins who were ready went in with him to the wedding banquet. And the door was shut.

Later the others also came. “Lord, Lord,” they said, “open the door for us!”

Therefore keep watch, because you do not know the day or the hour. Matthew 25: 1-13

Anyone with an Evangelical’s ear for scripture will recognize the eschatological implications of this parable: Be ready, for you do not know the hour of the Lord’s coming! But I shall submit to you an additional complimentary interpretation: be always refilling your oil jars, because you never know when you’ll need more oil. The foolish brides-to-be didn’t just fail to bring enough oil, they rested on their laurels, satisfied with the situation as they saw it and confident that what had worked thus far would continue to work in the future.

Eschatological thinking – let’s be honest here – tends to freak out Liberal congregations. It’s too supernatural and too apocalyptic and reeks too much of the televangelist and the man on the street corner with the sandwich board warning that the end is near. But eschatological thinking is exactly what is required to remind us not to get to comfortable with our present modes of operation and current fat and happy congregations. Eschatological language should be the LiberalEvangelical’s best friend, his or her constant companion and reminder that what worked yesterday and today, may very likely not work tomorrow. Our congregations, if they aren’t growing, evolving, responding to changes, and adapting; well if they aren’t doing those things then they are most certainly dying! If we aren’t seeking converts, then we’ll soon be looking for heretics in our midst.

Again, the Liberals among us may pause at that last sentence. We are aware of just how much damage simple conversion oriented evangelism has done over the years. But “looking for converts” need not mean looking to take people who are different and put them in some sort of Evangelical machine where they all come out looking and thinking the same. It may be more helpful to talk of looking for “partners” instead of “converts.” Converts implies that we stay the same while you modify yourself to meet our standards. “Partners” has a more helpful connotation insofar as it assumes that you change to meet us just as we adapt and evolve to meet you. This means that they entire act of coming together is dynamic on both sides, and this dynamism is the kind of adaptive attitude that can keep congregations, denominations and entire movements fresh and open to new experiences. If this is our attitude, then we won’t need to worry about heretics, we might in fact welcome them as sources of criticism and new perspectives. Today’s heretic may be tomorrow’s prophetic voice in the wilderness calling us to new and better things.

So I’ll keep this in mind these next few months as more and more candidates throw their hats in the ring and decide to pursue the highest political office in the U.S.. Who is looking to root out heresy and who is looking to build coalitions and partnerships? And I’ll be looking at and thinking about the same thing in our churches.

Straightforward Information on Religion in the 2008 Election