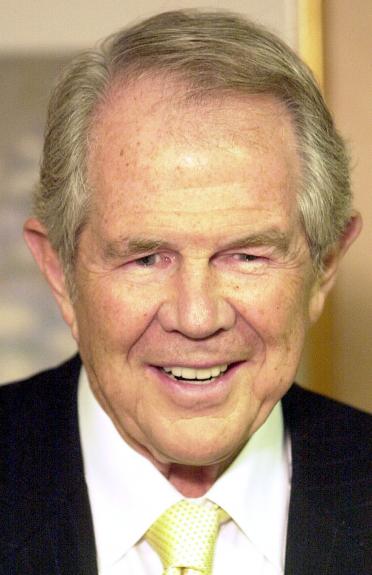 I’m beginning to wonder how long we’ll ever go in this country without an evangelical leader making some controversial remark or getting in trouble for something controversial they said in the past.

A few months ago, it was Pat Robertson (right) and his explanation of what caused the earthquake in Haiti, and more recently, Billy Graham’s son, Franklin (left), was in the news for having his invitation to speak at the Pentagon prayer service rescinded because of some comments he made about Islam. While I understand the thinking and the zeal that justify their rhetoric, I must say that there are far better ways to address the world, and you would find them nowhere else than in the scriptures.

One of the best biblical stories evangelicals could learn a lesson from is the speech Paul gave the first time he arrived in Athens. According to the Book of Acts, when Paul got to Athens, he saw that they had so many gods that they even had a sign dedicated to a certain “unknown god.” But even though he was convinced that Jesus Christ is the real God and was actually planning to convert those people, he didn’t use the kind of aggressive language evangelicals use today. He didn’t tell them that their religions were evil or that they would go to hell because they didn’t believe in Jesus. Instead, he said to them: “the One whom you worship without knowing, Him I proclaim to you.”

Another example of a great man of God being considerate of other people was given by Peter in Antioch. Like all the other apostles and most of the first Christians, Peter was born and raised Jewish. One of the biggest questions for most of them in those days was whether or not they were to continue to observe the Jewish law. While Peter had already understood that pagans could also have access to the gospel and that as a Christian he wasn’t required to obey the Jewish law or at least some aspects of it, many of the other converts still struggled with the issue.

So Peter would normally associate with the gentiles, eating and drinking with them. But when other Jewish converts were around, he would step back and stay away from the pagans. When Paul – who was still new in the ministry at the time – noticed that, he strongly criticized Peter, interpreting Peter’s actions as hypocrisy. But later on when he wrote his letter to Corinthians, he would recommend the same attitude, calling it wisdom.

Many evangelicals today stand exactly where Paul was back when he criticized Peter. They think they ought to separate themselves from the rest of the world and they believe they have to speak up and warn people about the danger of hell. As shocking as it may sound, they often do that with the best of intentions – in fact, they believe they would be sinning if they didn’t say those things.

But still, I think they could use this piece of advice from Paul’s second letter to Timothy: “And the Lord’s servant must not quarrel; instead, he must be kind to everyone, able to teach, not resentful. Those who oppose him he must gently instruct, in the hope that God will grant them repentance leading them to a knowledge of the truth.”

Wakefield’s Francis Chiminje writes a periodic column for the Wakefield Observer. Article reproduced with author’s permission. Originally published here. Any comments for the author? Send them to: wakefield@cnc.com.