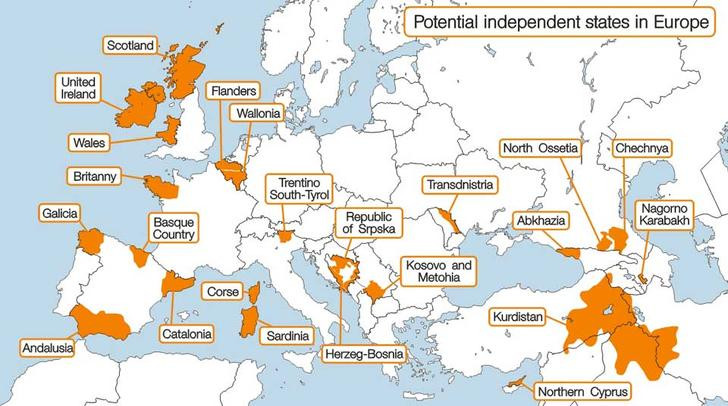 A Timely Repost: Scotland Rejects Independence from the UK

Liberals of all kinds are in a tough spot at the moment. This is what happens when our moral intuitions get crossed up and our ethical instincts conflict with one another. The situation I have in mind involves separatism, and wherever you look it seems like separatism is in the air.

I’m an exceptional case here and I know it. I’m an Anglo-American living in Quebec (for the moment a province of Canada) with a best friend who’s an Anglo-American living in Catalonia (for the moment a province of Spain). So my ears are hyper-attuned to questions of separatism and independence, especially when these separatist movements are taking place in democratic societies. I hear talk of separation referendums in Scotland, Catalonia, Quebec, Crimea (Now apparently a done deal!), and yes even TEXAS, though the later is largely a joke. And just to confuse the issue a bit more, you should know that I’m American by birth, but Southern by the grace of God. In undergrad at Transylvania University I lived in a dormitory named after Jefferson Davis, President of the Confederacy and in high school I was for two years a proud Boone County High Rebel: and yes we flew the battle flag of the Confederacy at football games. So I know a thing or two about separatism and its potential costs.

The challenge for Liberals, is that we are almost always of two minds about separatism. The challenge for LiberalEvangelicals is that we are inextricably linked to a Gospel that challenges us to forgo our desire to be surrounded by folks of a similar mind and of similar ways in favor of a much more radical vision of Christian community, a vision of community in which difference is not abolished through separation, but transcended through common cause.

As I mentioned, when it comes to separatist talk, Liberals are of two minds. On the one hand, the notion of a group of people having the right to determine their own fate without outside interference appeals to our innate sense of fairness. It does not sound right to us that “outside forces” and “foreign powers” should dictate laws and actions in distant lands. Anyone familiar with Lost in the Middle? and Found in the Middle! will recognize my language of moral intuitions and fairness. I’m referring here to the work of Jonathan Haidt and his research in moral psychology, work that LiberalEvangelical.org frequently draws on. Haidt’s point is that one of the key qualities that mark Liberals is our concern for fairness, a concern that tends to trump many other ethical concerns like purity, in-group loyalty, and respect for authority. When looked at through the lens of fairness, many of us will see a just cause in the calls for separatism that echo in the news at the moment.

But on the other hand, we Liberals are equally attuned to see the world through and ethic of “do not harm.” And here is where our internal conflict comes to the fore. As mere calls for increased freedom, we sympathize with separatist movements, but we also see that many if not most separatist movements, especially those inside fair democratic systems are in fact purity movements that directly threaten to harm minorities and other folks who are deemed impure. Would anyone want to be a non-Kurd in an independent Kurdistan, a non-Francophone in an independent Quebec, a non-Sikh in a separate Khalistan? These and many other independence movements are centered on a notion of a separate and distinct people, whether that people be defined linguistically, ethnically, historically or religiously. And these purity movements are inherently conservative, despite their rhetoric, creating and perpetuating notions of in-group loyalty and out-group suspicion.

It’s tempting to revel in the concreteness of my own situation and use this blog as a forum for attacking the Parti Quebecoise, whose calls for independence and the banning of religious headgear employ the rhetoric of religious, linguistic and ethnic purity. But I’ll do no more than point you to the actual text of their proposed bill i.e. the “Charter of Values.” You can see and judge for yourself.

The point worth noting, as many others before me have done, is that these groups defend “our” rights to autonomy even as they define “our” or “nous” in such a way as to exclude huge swaths of the population or force them to assimilate.

When faced with these situations, Liberals can prevaricate AND DO, but LiberalEvangelicals have a higher stander to live up to even though we might feel a bit conflicted. The standard I speak of was set at the Jerusalem Council, as remembered in the book of Acts. Here Paul and Peter have their tussle about the necessity of circumcision and question whether or not a gentile must first become a Jew before becoming a Christian. As I read the story, the central issue was one of identity formation: how tightly should we draw boundaries that define who can be a part of the body of Christ? Consensus slowly emerged that gentiles and Jews could both be Christians i.e. the category “Christian” would remain an “impure” one from the perspective Paul’s antagonists. What a momentous decision! It is my honest opinion that had things gone the other way, Christianity would have dissolved back into its Greco-Roman-Jewish milieu, amounting to little more than a historical footnote. At the root of the Church is the extraordinarily powerful and risky decision to make Christianity a “big tent” religion.

So how should LiberalEvangelicals respond to purity movements and how should we vote? Of course every situation has its own peculiarities, but as a general rule, are we not committed to life together with difference? Are we not working to testify to the possibility, a possibility preached in nearly every chapter of the book of Acts, that we need not first agree in order to eat with and live with one another in fellowship? Rather, should we not live together in fellowship first, so as to become better sisters and brothers and neighbors? It would be wrong of us to assume that the rest of the world must be held to LiberalEvangelical standards, but it is not asking too much that we hold ourselves to these standards, that we challenge Christians of all stripes to do likewise and that we understand our lives together as the best witness we can offer the world regarding the possibility of reconciliation.

Reimagining Judas One Pint at a Time

Looking at Poverty through a New Perspective

New Resource on Education and Theology