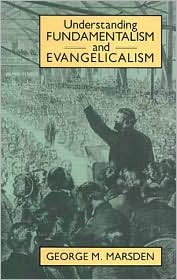 There is a great divide in this country between Fundamentalist, Evangelicals, and Liberals within Christianity. Understanding Fundamentalism and Evangelicalism traces the history of these theologies back primarily to the mid-19th century with the emergence of Darwinism. The vast majority of the book is focused on the 20th-century divide between Fundamentalism from Evangelicalism with some discussion of liberalism to complete the spectrum of theologies that emerged from the same American Protestant roots.

The author George Marsden is a professor of history at Duke University, School of Divinity. This book emerges from essays written during the 1980’s. Thus, it is important to view the book more as collection of essays woven together around a particular topic than as a cohesive book.

Marsden begins the book discussing in two essays the historical overview of Fundamentalism and Evangelicalism primarily with a focus on post Civil War America. After the Civil War Evangelicalism had a great affect on the politics of America, this discourse was initially set by northerners. “Northerners often equated the advances of the Union with the advances of Christ Kingdom. National, and even world, reforms would mark this marvelous Christian millennial era.” (9) With the elimination of slavery northern Christian groups shifted their focus to opposing drinking, Sabbath breaking, prostitution, and other vices. However, in the later decades of the century the split between liberal and conservative was beginning to creep into American Protestantism. “As theological liberals spoke more and more about the social implications of the Gospel, revivalist evangelicals spoke of them correspondingly less.” (30) Billy Sunday, one the revivalist leaders, would charge “recent emphases were trying to make a religion out of social service with Jesus Christ left out.” (31) According to Marsden, this statement exemplifies the political split of evangelical/liberal during the late 19th century and early 20th century. However, there were other dividing lines as well, as “vastly different understandings of the gospel were developing; Darwinism and higher criticism was challenging the authority of the bible.” (32)

The divide caused by Darwinism was the cause of conservative evangelicalism rise, with the intellectual spokesman emerging primarily from the conservative Presbyterian theological seminary in Princeton. The doctrine of inerrancy was developed, and became the litmus test for inclusion. For instance, Professor Charles Briggs of Union Theological seminary was brought to trial by the Presbyterian Church and suspended from the ministry. “The result however was that he and his seminary left the Presbyterian Church.” The liberal/conservative split was evident as “between 1878 and 1906 almost every major Protestant denomination experienced at least one heresy trial.” (38) According to Marsden, this to led the rise of Fundamentalism after WWI, especially in response the extravagant lifestyle of the 1920’s. “Both liberalism and sizable conservative counter-movements (Fundamentalism) had been building for a generation; but before the war the activism of the era had over shadowed theological debates and relative peace had been preserved. The war and postwar crisis, however, forced each party to confront the others.” (56) By 1930, it seemed that liberals had won the day as the Fundamentalist voice was being quieted on the political front, but “fundamentalist continued to do what they did best, evangelize and build up local churches” (58). The influence of Fundamentalism was long from over in America.

The second essay focuses on the battles within conservatism that would lead to both unity of many conservatives, and division that would give Fundamentalism an identity since 1930 (which seems to be a dividing point for Marsden in his historical analysis) In the 1940’s “Neo-Evangelicals were convinced that if the voice of fundamentalism could be tempered slightly, evangelical Christianity could win America.”(64) It is in this chapter that Marsden seeks to create an understanding of the difference between Evangelical and Fundamentalist. In general, fundamentalists “left the major denominations to join or to found independent local Bible churches.” (66) Unlike neo-evangelicals, there was a “militancy toward modernist theology and cultural change, and the rhetoric of no compromise” (66), which inevitably meant separatism. Billy Graham best represents what happened within Evangelicalism during this era. Graham focused on unity and was a “positive fundamentalist”, creating such organizations such as the National Association of Evangelicals. Fundamentalism since the 1930’s was becoming more and more associated with dispensational pre-millennialism, and Graham’s positive message did not resonate with them. “By 1967, it was becoming impossible to regard American evangelicalism as a single coalition.” (72) This was especially true as evangelical groups started working on social reforms in the 1960’s with emerging groups such as Sojourners. Although always marked by charismatic individuals, Fundamentalism was even more marked by individuals since the 1960’s such as Oral Roberts, Jerry Falwell, and Pat Robertson. Many of these individuals and groups were affected by scandals in the 1980’s, but there is little analysis of this as the essay was written too close to the events to be able to see clearly the impact of Fundamentalism as historical perspective did not have time to set in.

The second half of the book expands on ideas already discussed in the previous historical context laid out by Marsden. The essays dive deeper into the topics he covers in each of the first two essays. This creates more clarity surrounding those topics as a more in depth analysis is undertaken. There are two chapters on Evangelical politics that span the entire history of America, but is again focused on 19th and 20th century politics. One focuses on general trends of Evangelicals, but because of Fundamentalism’s separatist notion it has been difficult for there to be a unified voice. The other is focused more on individual leaders within Fundamentalism effects on politics. For instance, thanks to Pat Roberson’s Moral Majority, evangelicals have had more success in the latter half of the century. (Take note that these essays were written in the late 1980. Therefore, the Evangelical political force and success of the late 1990’s and 2000’s has not been considered.)

As with politics, there are two essays on science and Fundamentalism/Evangelicalism. Before Darwinism, as a whole, science and religion worked together. Science was seen as a proof of religion. Interestingly, it is supporters of Darwinism that created “warfare” language between science and religion. The secularization of many of the universities and colleges in American only reinforced the divide between religion and science. According to Marsden, Evangelical scientists to this day fall into two scientific camps; “those (Christians) who believe in one science or rationality on which all humanity ought to agree. Or, Christians’ basic assumptions should have substantial effects on many of their theoretical conclusions in a discipline.” (151) It is within this framework that Marsden analyzes the Evangelical relationship with science, especially in his essay on Creation Science.

Overall, this book does a good job in helping one understand the emergence of Fundamentalism and Evangelism. It is important to understand that it is collection of essays, more than a book however. Certainly there is a unifying theme, but there is a lack of continuity in reading the book straight through. The benefit of this is that one could easily read just one essay on its own, without needing the rest of the book. However, if this creates a lot of repetition throughout the book as material is covered many times. The reader must shift dramatically to the perspective that the essay is written from. For instance, Marsden shifts from historical narrative in the first half of the book to a topical history in the second half of the book. This shift certainly has its benefits, but unlike a typical book with a flow the reader must realign with the perspective. Also, the terms Fundamentalism and Evangelicalism are never clearly defined. Perhaps this is intentional as the terms have a dynamic, shifting definition historically. Finally, as I noted earlier the book is dated at this point; as it lacks coverage of the enormous effect of Evangelicalism on America in the last 20 years. This was felt most blatantly in the chapters on politics. If one wanted to gain an understanding of the historical roots of Fundamentalism and Evangelicalism this is great book, though.

From Mourning to Meditation

GLBT Activists and Advocates sit down with Evangelical Mega-church Leaders