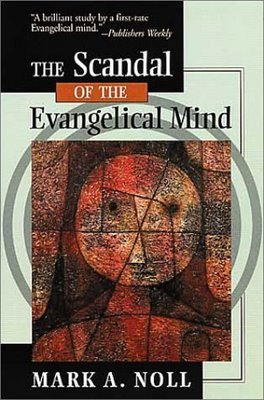 There is a scandal plaguing the evangelical church. No, it is not regarding a sexual indiscretion or any sort of moral practice. Mark Noll asserts that the scandal of evangelicalism “is that there is not much of an evangelical mind” (3). Noll is an evangelical scholar who currently teaches history at the University of Notre Dame. For many years Noll was a professor at Wheaton College in history and theology. It was during his time at Wheaton that Noll penned The Scandal of the Evangelical Mind. When looking at evangelicals he is greatly distressed because “notwithstanding all their other virtues, American evangelicals are not exemplary for their thinking, and they have not been so for several generations” (3).

The Scandal of the Evangelical Mind is broken down into four sections. The first section comprises the opening two chapters and discusses the contemporary scandal for evangelicals (their lack of influence and contribution to the collective intellect) and why this is an important issue for evangelicals. Section two of the book evaluates the history of evangelicalism and factors that contributed to a lack critical thinking, specifically noting the “intellectual disaster of fundamentalism” (109). Noll addresses the ramifications of the scandal in section three by discussing how evangelicals have thought about politics and participated in science. In the concluding fourth section Noll asks if there is any hope for the future of the evangelical mind. This book is “an effort to show why this scandal emerged as it did in North America and how it might be possible to minimize its pernicious effects” (23).

As a historian and theologian Noll notices the general lack of influence evangelicals have had on intellectual activity in the past several generations. He states: “The general impact of Christian thinking on the evangelicals of North America, much less on learned culture as a whole, is slight” (5). Noll states three dimensions that contribute to the scandal of the evangelical mind. The first dimension is evangelical culture, which “allows little space for broader or deeper intellectual effort because it is dominated by the urgencies of the moment” (12). Secondly, evangelicalism is lacking institutional participation in the world of intellect. Evangelicals have no research universities or periodicals that engage politics, sciences, or the arts. Thirdly, it is a theological issue “to neglect, generation after generation, serious attention to the mind, nature, society, the arts . . . [and] may be, in fact, sinful” (23). Evangelicals should be concerned about this lack of intellectual engagement with ideas in the modern world because their passion to show the love of Jesus to the world is inhibited by a lack of attention to the mind. Often evangelicals have isolated themselves from the intellectual society because of their lack of profound study. Noll states that this is because “evangelicals do not, characteristically, look to the intellectual life as an arena in which to glorify God . . . In our past we have much more eagerly leaped to defend the faith than to explore its implications for the intellectual life” (55).

Looking into evangelicalism’s history Noll demonstrates that intellectual pursuit was a characteristic of much of the evangelical tradition. He shows that the Reformers, the Puritans and individuals (e.g. Jonathan Edwards) held high respect for the mind. However, certain historical factors contributed to evangelicalism’s movement away from the life of the mind. One of these factors was the spiritual revivals of the 18th and 19th centuries. “Revivals called people to Christ as a way of escaping tradition, including traditional learning” (63). Also contributing to evangelicals’ disengagement from the intellectual world was the widespread influence of Scottish philosophy, which stated “people could reason naturally from the evidence of their own consciousness to the existence of God” (93). The result of the Enlightenment and the Civil War was a “threefold division of nineteenth-century evangelicalism” (101): 1) liberal evangelicals who conceded to new discoveries of science; 2) populist evangelicals (later fundamentalists) attempted to maintain “old content as well as old form” (101); 3) evangelicals who fell into the middle who were “unwilling to decide decisively for either the old paradigm with its harmony between science and theology or the new with its division between theology and science” (101). Although these changes contributed to a loss of intellectual participation, it was “a tremendous achievement for American evangelicals to save both the reputation of the gospel and their own influence within society” (105) and not fall victim to the lack of vitality of Europe’s established churches.

Particular areas that lack intellectual engagement by evangelicals are political reflection and the sciences. Noll states that evangelicals’ exaltation of the “supernatural at the expense of the natural makes it nearly impossible to look upon the political sphere as a realm of creation ordained by God for serious Christian involvement” (174). Instead of politics being viewed as an institutional structure to effect change in all areas of life, evangelicals have often limited their political focus and efforts to moral activism where evangelical morals are stressed. Since the time of Darwin’s theory of evolution evangelicals have drawn a line in the sand by rejecting evolution, which has led to a devastating faith vs. science war. Some evangelicals have embraced and passionately pursued a “creationist” view of the origins of the planet. In fact, “since 1960 creationism has done more than any other issue except abortion to inflame the cultural warfare in American public life” (192).

Although much of the assessment of the intellectual life of evangelicals could lead to a lack of hope in an intellectual future for evangelicalism, Noll spends the concluding two chapters discussing possible reasons for evangelicals to remain hopeful. Looking to the individual examples of Billy Graham and Carl Henry and the integration of Dutch Reformed immigrants and their contribution to publishing companies and philosophy there is a possible future for the evangelical mind. Noll admits that many evangelicals might be “ill equipped” (250) but they enlist many new members, are attached to scripture and have a passion for activism all of which might spark an intellectual revolution. “The greatest hope for evangelical thought lies with the heart of the evangelical message concerning the cross of Christ. If evangelicals have systematically disregarded the implications of the work of Christ for the life of the mind, they nonetheless continue to talk about Jesus. In that talk is potential beyond estimation” (252).

Mark Noll’s The Scandal of the Evangelical Mind is a wonderful contribution for both evangelicals and non-evangelicals alike. Noll walks a tight line in assessing evangelicals as an evangelical. Noll makes effective use of the history of evangelicalism to identify factors that contribute to the state of the evangelical mind and he also shows what issues have been lost and are in need of retrieval and what issues are tangential and need to be left behind. However, Noll’s end goal is confusing. He laments that even though some evangelicals “have in fact made significant intellectual contributions” (138) they have done so through the insights of other Christian traditions (e.g. Anglicanism, Calvinism, Roman Catholicism). This seems to be the kind of contribution his book is pushing, an engagement with ideas distinct from evangelicalism. Is Noll’s point for evangelicals to engage in the wider intellectual community or is it that they need to have unique “evangelical” contributions? One is left wondering. Yet, Noll’s strength is in his ability to offer honest critique of a subject in which he is greatly involved. To understand the history of evangelical thought and its potential in the future one should keep Mark Noll’s The Scandal of the Evangelical Mind within reach.

The Anglican “Disneyfication” of Moderation