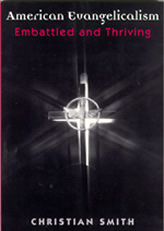 American Evangelicalism: Embattled and Thriving By Christian Smith. University of Chicago Press, 1998. 324 pages. $18.00. If you thought traditional religion could not thrive in the pluralistic society we live in you were wrong. At least according to Christian Smith in American Evangelicalism. Smith is a professor of Religion and Society at the University of Notre Dame. As a sociologist Smith’s concern is whether “modernity creates the conditions in which traditional religion may thrive” (218). He will argue that not only is it possible but we can see example of this by examining evangelicalism. In case the audience is unfamiliar with evangelicalism Smith gives a brief history on the groups formation out of fundamentalism. He distinguishes three markers that set evangelicalism apart from its fundamentalist heritage: 1) Spreading the gospel should not be sacrificed for doctrinal purity; 2) evangelicals “wanted a true Christian faith that could hold its own in academic circles” (10); 3) “this group of emerging fundamentalist reformers believed that orthodox Christians needed to be socially and politically active” (10).

In American Evangelicalism Smith’s task is twofold. First, in the first two chapters he examines the current state of evangelicalism to determine whether or not it is a growing, thriving religious sub-culture. This is done with the help of Michael Emerson, Sally Gallagher, Paul Kennedy, and David Sikkink. “The data used in this book come[s] from the Evangelical Identity and Influence Project, a three-year, multimethods, national-level study focused on contemporary American evangelicals and their social and religious context” (221). This approach included interviews, telephone surveys, congregational observations and follow-up interviews from 1995-1996. Second, having determined that Evangelicalism is thriving in America Smith sets about determining a sociological theory which explains this (reword). The importance of sociological analysis is that it “enables us to see the qualitative differences in the histories, organizations, subcultural norms, and social positioning of religious groups can significantly shape their strength” (67). Chapters three to five assess current sociological theories and the author puts forth his own “subcultural identity of religious strength” (120). Chapter six investigates those outside of the evangelical subculture to see whether pluralism is eroding their religious beliefs. Having constructed a social theory for the possibility of a traditional religion thriving in our pluralistic society, chapter seven shows how many of evangelicalism’s strengths are also its weaknesses.

Church attendance and membership are only two aspects of determining the vitality of a religious tradition. Smith identifies six elements that reveal religious strength (21ff.): 1) Adherence to beliefs; 2) Salience of faith; 3) Robustness of faith (lack of doubt); 4) Group participation; 5) Commitment to mission; 6) Retention and recruitment of members. Contrasting the responses of liberals/mainliners and fundamentalists with those of evangelicals, Smith concludes that “modern American evangelicalism enjoys a religious vitality – measured sociologically – that surpasses every other major Christian tradition in the country” (120).

Understanding that evangelicalism is thriving is not enough. Smith wants to understand the “social forces and structures” (67) that govern such religious strength. Four theories of religious vitality are discussed and evaluated to determine if they are helpful in explaining prospering evangelical tradition. The first theory is the Sheltered Enclave Theory which “contends that religions – especially traditional, orthodox religions – survive and prosper when the are sheltered from undermining effects of modernity” (67-8). Second, the Status Discontent Theory “focuses on threats to or anxiety about the social status of religious groups” (69). Third, Strictness Theory “argues that ‘strict’ religious groups thrive, while ‘lenient’ religious groups languish” (71). Lastly, there is Competitive Market Theory that claims “religious regulation and monopolies create lethargic religions” whereas “capable religions thrive in pluralistic, competitive environments”(73). Sheltered Enclave Theory and Status Discontent Theory offer little help in explaining evangelical vitality because evangelicalism is not sheltered from modernity nor do evangelicals see their social status as threatened. Strictness Theory brings us closer to a sociological explanation of evangelicalism’s vitality because “it does appear that the church denominations that have been thriving are what one could characterize as strict” (84). However, Strictness Theory fails because it “much more accurately describes the character of fundamentalism” (85) and fundamentalism is not thriving in comparison to evangelicalism. In addressing the religious strength of evangelicalism, Competitive Market Theory “seems” to present the best orienting framework and set of assumptions with which to construct an explanation” (85).

Modern evangelicalism is thriving and its “vitality is not a product of its protected isolation from, but of its vigorous engagement with pluralistic modernity” (88). In other words, evangelicalism “thrives on distinction, engagement, tension, conflict, and threat” (88). Smith utilizes basic sociological principles to determine what he identifies as a Subcultural Identity Theory. This theory states: “Religion survives and can thrive in pluralistic, modern society by embedding itself in subcultures that offer satisfying morally orienting collective identities which provide adherents meaning and belonging. In a pluralistic society, those religious groups will be relatively stronger which better possess and employ the cultural tools needed to create both clear distinction from and significant engagement and tension with other relevant outgroups, short of becoming genuinely countercultural.” (118-119)

The Subcultural Identity Theory gives explanation to evangelicalism’s ability not only to survive, but also to thrive in the pluralistic American culture. Chapter five gives detail to the response of evangelicals to conflict, difference and tension with culture. Evangelicalism flourishes as a subculture because it maintains strong boundaries with the non-evangelical world (124) through lifestyle and value distinctiveness (131). In contrast with fundamentalism, evangelicalism does not allow these boundaries to isolate itself from the pluralistic culture but actively engages it by trying to spread its message not as a “craving for cultural dominance, but a sincere belief that everyone would simply be better off following God’s ways” (129). Thus, evangelicalism is thriving because it maintains a distinct, yet engaged relationship with culture.

To test the value of his Subcultural Identity Theory in the greater sociology of religions picture Smith evaluates doubters (those who doubt their faith often) and defectors (those raised in religious families but define themselves as non-religious). The author concludes that, “We have found even in these cases relatively little evidence to support the modernization-secularization paradigm’s view of religious belief in the modern world” (172). The last chapter of this book shows how some of the strengths of evangelicalism are also its weaknesses. “Many of the very features which evangelicals view as positively distinguishing themselves from others were the points which ‘turned off’ outsiders” (184). Also, evangelicalism places a high emphasis on personal influence (where each individual is responsible to make known their faith to others). Evangelicals thus miss the “supraindividual social structures” (185) that govern people and our way of life. Elements to contribute to evangelicalism’s religious vitality also inhibit it from achieving more widespread influence.

This book presents a workable understanding of American evangelicalism and the factors that lead to its role in our culture. There are elements of this study that I find problematic. One of the elements that distinguished evangelicalism was “robustness of faith.” Evangelicals were rated highly on this criterion because “their answers suggested a variety of bases of assurance and very little doubting” (29). In comparison, “many mainline and liberal Protestants expressed relatively lower levels of confidence and assurance in their faith” (57) and Smith concluded that they did not have as robust a faith. Smith stated that liberals “did not express clear and straightforward commitments to traditionally orthodox Christian theological belief and ethics” (52). He illustrated this by quoting from their interviews a woman who “respect[s] other people’s religions very much” (52), a man who said “there’s only one God, no matter what you call him”(53), and a man who says he “was brought up in a Christian condition and [has] spent some time trying to understand what I really think about Christianity” (53). These responses from liberals may actually represent a more robust and complex understanding of faith and their adherence to their beliefs, which do differ from evangelicals’ beliefs. Smith’s definition of robust faith seems too narrow to assess responses from non-evangelicals accurately.

Straightforward Information on Religion in the 2008 Election