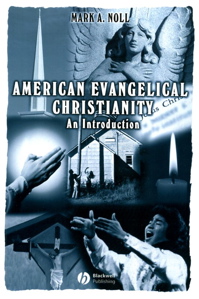 Mark A. Noll, professor of Christian Thought at Wheaton College, has produced a book which is historical, political, and religious all in one package. American Evangelical Christianity offers a subtle and unique presentation of the movements leading to modern evangelicalism in America.

The first sentence of the book offers a terse summary of what will follow: “This book describes, interprets, and evaluates a stream of Christianity that was the predominant form of religion in the early history the United States, that existed as a large but disintegrating force in the first half of the twentieth century, and that has been an increasingly visible but frequently misunderstood political presence over the past fifty years” (1). This is undertaken in two Parts, wherein Noll argues that evangelicalism is a culturally adaptable religious form. In Part III, Noll offers political advice to evangelicals, encouraging a “Christian Politics”. I will summarize the most important elements of this book before offering some evaluative comments.

Part I: Who Are Evangelicals?, explores the movements which culminated in American Evangelicalism. Beginning with the transformation of Protestantism via European pietism (which focused on individualistic emotion over ecclesiastical structure), moving through the revival-tent experiential conversion mentality of the Puritan Great Awakenings, and on into Charismatic forms, evangelicalism, alive and well, is now a major political force. Though the denotative meaning of the term “evangelical” is “good news”, its main components connote conversion, the authority of the Bible, an emphasis on proselytizing, and insistence that Jesus Christ is the only way to salvation. Noll claims that evangelicalism has been “an extraordinarily complex phenomenon: diverse, flexible, adaptable, and multiform“, powerfully influencing the cultures within which it has thrived by utilizing the communicative cultural avenues available (14-15). This has occurred via publications, educational institutions, radio, television, etc. By diversifying the movement, Billy Graham was an enormous factor in its advancement. Parallel to this adaptation was the political reaction of evangelicals to events such as the legalization of abortion and the removal of prayer in public schools. Hence the rise of conservative leaders in the media (e.g. Jerry Falwell, Tim LaHaye and James Dobson), have fueled “conservative evangelical support so important for the Republican Party since the campaigns of Ronald Regan” (23). In addition, hot-button topics such as women’s liberation, the inerrancy of the Bible, and creation-versus-evolution, have caused dissension in those identifying with the evangelical camp.

Part II begins by discussing the “historic standoff” between evangelicals and Catholics in America. Evangelicals complained that Catholicism teaches works based salvation, keeps laity from reading the Bible, celebrates secular festivities rather than worships biblically, makes “Mary a co-author of salvation”, adds doctrine to the Bible, and imposes hierarchical structures onto Christians (115-16). In the other direction, Catholics complained that evangelicals advance a cheap salvation devoid of holiness, dilute the Bible by emphasizing individual interpretations, discredits God’s utilization of institutions, demean the importance of Mary, and subvert Church authority to the whim of the theologically uneducated masses. Further, after the American war for independence Protestants began to equate Catholicism with a tyrannical force threatening to undermine that independence, and to suspect that Catholic believers were not truly American. This standoff lasted up to the mid twentieth century, and was diffused due to several key factors. First, Catholic President John F. Kennedy gave confidence to those questioning Catholic patriotism. So strong was their acceptance that Billy Graham exclaimed:”[Kennedy]’turned out to be a Baptist president'” (123). Further unifying factors included the arising of international coalitions involving Catholics, unity between both groups on political controversies (i.e. abortion, health care, etc.), and theological dialogue surfacing theological agreement between the two camps. In addition, the resistance of evangelicals to science is discussed. In short, this is due to moral concerns aimed at the ideologically neutral scientific method (e.g. evolution threatens evangelical creationism). Last, the “evangelical political mobilization” so important in Republican support is credited to the integration of evangelicals with Protestants (187ff).

Part III opens with “Evangelical Politics: a Better Way“. Here Noll advises American evangelicals with the message to instantiate a Christian politics which “featured Christ” (211). Noll argues that when “the bearing of Christology on politics” is neglected, “Christian ideals” are not practiced (ibid). In this way Noll believes that evangelicals will follow “reality as God experiences reality”, and do God’s will “in the political sphere”, as has been exemplified by “John Calvin”, “the English and American Puritans” and others (ibid). Further, the example of evangelicals in Canada is cited as a model for those in America (241). Noll closes this book by citing examples from evangelical hymns that demonstrate “Evangelicalism at its best”. These show a “Christ-centered picture of redemption”, and encourage both “gracious ecumenicity” and “altruistic Christian charity” (268-69).

In response to this book I will first state that Noll is a top notch scholar who is admirably transparent with regard to his identity as an evangelical. Parts I and II are excellent and informative historical analyses of American evangelicalism. However, upon turning the page to Part III, my optimism waned. Regarding the former, my primary point of contention is that Noll praises the adaptability of evangelicalism to American politics and culture as virtuous. But adaptability is only commendable if something good is adapting. This begs the question: has fundamentalist-evangelicalism been a good adaptation for America? I would argue no. Case in point, Noll cites the way in which evangelicals have learned to “‘sell’ the gospel in popular forms” such as “mass communication systems”, and to adapt themselves to “important American ideologies like republicanism, the Victorian home, and therapeutic individualism”, as though these were positives (2). Further, Noll articulates the “meaning” of American evangelicalism by its “element” that “has been exerting the most force – [when] born-again Christianity predominates – evangelical trust in Scripture is ascendant, or when the evangelical propensity for adapting to American culture takes over” (ibid). But I don’t understand – neither does Noll offer a convincing argument for – why these elements are commendable. On the contrary, I believe these to be problems. First, selling the gospel via televangelism, radio broadcasts, etc., has resulted in a consumer-entertainment driven form of Christianity. Second, using “important American ideologies like republicanism [and] the Victorian home” to impose religious convictions onto people is tantamount to equating the religious bias pushed through the high-jacking of these cultural symbols and ideals as coterminous with them. For example, to preach that “voting for God”, “obeying the Bible”, and “advancing Christ’s Kingdom” means voting Republican and protesting abortion clinics is to misrepresent both Christianity and democracy. Is this “what Jesus would do”? Third, the “therapeutic” element employed by evangelicals has reduced Jesus to an anti-depressant drug. The “Got Jesus” bumper sticker mentality (taken from the “Got Milk” advertisement) reduces Christianity to a healthy, purchasable product. And we have “the adaptability of evangelicalism” to thank for all of these! Evangelicalism’s influence on American culture and politics so admired by Noll is the reason G.W. Bush made it to office, the squelching of stem-cell research, and the list goes on. Who could reasonably argue these as positives? In my opinion America would be better off were evangelicalism less adaptive.

Last but certainly not least, Part III is altogether another monster. As there are so many shocking problems with Noll’s political advice for his fellow evangelicals, I will end with a long quote that can demonstrate the dangerous evangelical political attitude far better than could my critique. Suffice it to say, Noll advances a type of Christian-Theocratic-Crusader message wherein Christians (led by a totalitarian ego-maniac Jesus) essentially overtake the world. Beginning by quoting a fanatic, Noll exhorts his cult:

The message – and it is a very evangelical message – is worth the attention of all American evangelicals: In recent years, one of the most bracing encouragements to think and act like Christians in the political sphere has been to hear contemporary [persons] quote the spine-tingling tocsin that Kuyper first declaimed 115 years ago: “There is not an inch,” he roared,” not an inch in the entire domain of our human life of which Christ, who is sovereign of all, does not proclaim ‘Mine.'” Politically considered, no truer words could ever be spoken. They convey the dramatic picture of Christ transfigured in glory, hand out-stretched, finger extended in commanding power, standing over the halls of Congress, the White House, the United Nations, the state legislature, the local school board, the tax assessor’s office, the weary citizen sitting at home and reading the front page of the local newspaper, and declaring with full, yet winsome authority “This too is mine!” Yet it may be that this picture is not quite complete, for the footprints of the Jesus who points to every one of our political institutions, to every one of our political practices, to every one of our political theories, and claims each one as his very own, are footprints spattered with blood. And the hand that points is marked with a wound. Evangelical politics will be a Christian politics, if we evangelicals follow the commanding Christ as he takes possession of the world, but it will be a fully Christian politics only if my fellow evangelicals and I recall the road to Calvary that the Lord Jesus took to win his place of command and never forget that the robes of the saints shine white only because they are washed in the blood of the Lamb. (233)