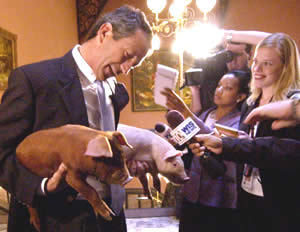 I worry about condemning hypocrites because someday I may want to be one myself.

The media loves a good story of a politician professing one thing and practicing another. Throw in sex, a foreign mistress, and the possibility of misspent public funds and they go positively haywire. Even the normally staid commentators on public radio had a hard time not tripping over their double and triple entendres when Governor Sanford of South Carolina – a state not unfamiliar with oversized political characters and stories – announced that he had spent recent days in Argentina with his mistress trying to figure out what to do about his marriage and family.

The story has only recently been knocked off the front pages due to the death of Michael Jackson, but it will continue to generate headlines as Sanford’s opponents work to remove him. And when these headlines appear, I will yet again be troubled by the prevalence of the word “hypocrisy.” I last gave this word serious thought when the Reverend Ted Haggard, a very public evangelical voice against gay rights, was publicly excoriated for a dalliance with another man. The problem I have with labeling these men hypocrites – and I took the time to look in several dictionaries and the label is technically accurate – is that it seems to suggest a contrast term. In other words, by calling someone fat, young, ugly, or liberal are we not implying the possibility that they might be skinny, old, pretty, or conservative? So if hypocrisy is “the practice of professing beliefs, feelings, or virtues that one does not hold or possess,” (American Heritage Dictionary) is there any contrast term?

As a Liberal-Evangelical I am more than aware of the foibles and faults of Liberal Christians. One of the theological mistakes that we’ve made over the past two centuries is to lose sight of the doctrine of Original Sin. This has created a gaping self-inflicted wound in many liberal churches and has allowed us go forward with a warped sense of human nature. This warped sense can best be illustrated with a simple question. Are we bad people striving to be better or good people fighting against forces that work to drag us down? In other words, do we understand human beings as naturally or inherently flawed and sinful creatures who need the Gospel of Christ to pull us up out of the miry clay, or are we naturally benevolent almost divine creatures that struggle against the deadening forces of cultural inertia and sin that keep us from realizing our inherent goodness?

The way in which we answer this question is of utmost importance for the ways in which we organize our churches, our political institutions, our prisons, and even our families. Is the basic religious task one of restoration or one of elevation? The Chinese would recognize this question, though they would read it through the Confucian tradition and see here the age old dispute between Xunzi and Mencius. Students of early Christianity might see this question through the lens of early debates between Gnostic Christians and those who would later be called Orthodox. Some observers of the Eastern Christian Churches might see here one of the issues that sometimes divides the East from the West, Western churches having a less elevated view of human potential than those in the East. I raise this distinction because the doctrine of original sin works to encapsulate both visions of human nature in one theological symbol. Forget about the narrative with the apple, the snake, and the fig leaves. Original sin is less about what happened in the past and more about the kind of creatures each of us is now. If we could rename the doctrine today – though alas that ship has probably sailed – I’d vote for calling it the doctrine of ubiquitous sin because it suggests that sin is an accidental but ubiquitous quality of all people.

Ok, sorry for that previous paragraph, I switched into professor mode for a moment, but if you’ll grant me one more such paragraph I think the payoff will be worthwhile.

I used the term “accidental” to describe the quality of human sin. This term suggests that “it could have been otherwise” just as it could have been otherwise that I put on boots instead of sneakers this morning. An apt contrast term to “accidental” is “essential” and any essential quality is one without which a thing could not be what it is. So my being a mammal is an essential quality (no non-mammalian humans) while my weighing 240 is accidental (see me just after Thanksgiving). The doctrine of original sin pertains to the status of sinfulness as a human quality, and it tries to have it both ways. Every human, it asserts, is sinful but our sinfulness, while universal, is still accidental because we were created to be without sin. In the capable hands of St. Augustine the Adam and Eve narrative provides a ways of tying these ideas together and offers a pseudo-biological explanation that involves concupiscence and lots of juicy sexual details. But please, do not get distracted by the narrative as so many liberals have in the past. Do not throw out the proverbial baby with the bathwater. We desperately need to retain the central insight of this doctrine: we are not inherently sinful but we are unavoidably sinful. If it helps, think of original sin as a kind of theological E=mc². It gets enthusiasts excited about the possibility of stopping time, but its immediate effect is to demonstrate the practical impossibility of generating sufficient energy to do so. So the doctrine of original sin offers a suggestion for thinking about the human condition: we are all sinners, pushing ourselves toward God, but still in desperate need of a divine hand.

The metaphor we choose for describing human sin, I think, colors the way in which we look at the actions of Sanford, Clinton, Haggard, Edwards, etc., etc., etc. Too many of us liberals have misjudged human nature. We’ve read too much Emerson and Channing and been too optimistic about human nature. We’ve thrown out the doctrine of original sin, embarrassed by the snake and apple story, and have been lured into misunderstanding the ubiquity of human sinfulness. If I may be allowed to rephrase Augustine, it is not possible not to sin – though we may avoid sinning at any given opportunity, infinite opportunities will present themselves tomorrow – and to think otherwise sets us up for a number of disturbing reactions to the unavoidable.

We liberals often express a certain glee at the fall of conservative leaders. “Ha! They’re no different from those that they condemn.” See Salon.com for just one example. We might not be so quick to show petty glee and try to score political points if we had a deeper feel for the ubiquity of sin. And lest we think that this pertains only to the fall of conservatives, notice please the predictable disappointment we demonstrate when Liberal leaders stray. Lacking a robust appreciation for the ubiquity of sin we are too quick to elevate our heroes (Kennedy, Clinton, Obama) and make idols out of these mortals. So when they let us down – as all humans must! – we are crestfallen. We should have seen and should always see it coming.

So yes, Governor Sanford is a hypocrite because while he was a Congressman he loudly condemned President Clinton for his infidelities and then pursued his own. Yes it is hypocritical for the party of “family values” to have so many leaders who destroy their own families through personal failings. But it was also hypocritical for Democrats who railed against now Justice Thomas for allegedly sexually harassing Anita Hill to look the other way when President Clinton lied in a deposition given in a sexual harassment lawsuit. Hypocrisy is – to borrow a sports metaphor – par for the course. It is the human condition. It is unavoidable. When we ask politicians to voice and vote their opinions on a variety of topics, it is inevitable that they will voice and vote an opinion that they themselves will not live up to.

People should not speed – I speed.

People should not lie – I lie.

People should not be hypocrites – I’m a hypocrite.

The commentator and columnist Peggy Noonan produced one of the greatest lines ever this past week on This Week with George Stephanopoulos. Regarding the possibility of avoiding these kinds of embarrassing revelations in the future, she suggested that politicians who give speeches should step to the mike and say, “This is what I stand for and by the way I’m a jackass.” Agreed.

I wonder if more Christians and especially Liberal-Evangelical Christians wouldn’t be better off if we began more of our blogs, sermons, speeches, and letters that way.

As for hypocrisy, there is no contrast term. Hypocrisy is essential to our humanity.