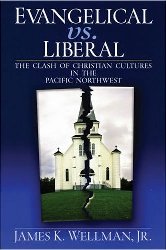 This book is the result of a project the author has undertaken to study both liberal and evangelical Christianity in the Pacific Northwest (PNW) with a view to discovering how these two distinct groups of Christianity interact with each other. The book is divided into three parts comprising twelve chapters. The first part of the book deals with the context, theory, and methodology of the study. The study was done in one of the most secular regions of the US, western Washington and western Oregon. The author made a comparative study of twenty-four evangelical and ten liberal churches of this region through extensive and systematic interviews with both the clergy and the laypeople. Using the results of his interviews, the author has attempted to analyze, compare, and contrast evangelicals and liberals. He has identified the liberal/evangelical Christians as two religious subcultures that compete for dominance within the American religious landscape, which has implications for American politics and cultures.

In the second part, the author discovers how the moral worldviews and the core allegiance of the two groups shaped their faith. While the evangelical worldview is informed by the centrality of Christ, the liberals derive their worldview from the principles which Christ embodied that must teach us in how to live in this world. While evangelicals hold a very fundamental and traditional view of the Bible as inerrant and authoritative, and emphasize the spiritual dimension of the Bible, liberals stress the social thrust of the Bible.

Liberals find the exclusive claims of evangelicals as coercive. For them, individual freedom to choose and one’s own autonomous decision-making are very important. Evangelicals, on the other hand, believe that responding to ultimate truths of their faith is a great challenge. They believe that fulfilling the demands of the ultimate truths is possible only through grace. Church, they believe, is not a perfect place, but here people are enabled by grace to move towards a changed life. However, there is the expectation of moral accountability, where members of the church are expected to have high standards of life. People are expected to be honest in confessing their sins and willing to change. Evangelical critique of liberals is that they do not take sin seriously. Liberal critique is that an evangelical view of sin portrays God as intolerant towards sin and as demanding blood sacrifice for forgiveness. While evangelicals emphasize human’s inability to do good, liberals affirm that not only are humans capable of doing good, but they are morally responsible to act with justice and compassion.

Wellman observes that in worship, the liberal churches are more traditional; yet they do not take sin or confession of sin as seriously as evangelicals do. Although liberals are very traditional in worship form, they have strong aversion to using the Nicene Creed in its traditional form. Evangelicals follow a more contemporary style of worship accompanied by modern music and a prominent place being given to preaching which has become attractive to young people. Prayer in worship is not seen as very important in liberal congregations, and they understand God as being more impersonal who does not intervene in human affairs. Evangelicals see prayer as very significant, and they see God as a person who intervenes in human affairs, and is at work in the world. They build their concept of prayer on the conviction that God is in control.

Liberals are committed to social transformation, but they do not emphasize divine intervention in transformation. They believe that humans are capable of taking care of themselves and to transform the world into a better place. They accuse evangelicals of being individualistic and being more other-world oriented. Wellman maintains that “liberals overstate individualism within evangelical communities” (192). He says, evangelicals “maintained a strong passion for civic engagement and deep interest in the common good” (194). They are grounded in their theological position, yet they are open to “the positive aspects of the secular and unchurched realties” (194).

In their understanding of mission, liberals and evangelicals differ. Liberals understand mission in terms of social service, establishing justice and equality in human society. Mission does not involve evangelism, and it should not be done with expectation of conversion. They also believe that in fulfilling such services the church can join with secular agencies. For evangelicals, mission is both social service and evangelism. They define mission as being holistic which involves both the spiritual and social dimensions of life. Evangelicals affirm their Christ-centeredness in their social service, and unlike liberals, they do not partner with non-Christian agencies. This view of mission is also reflected in how liberals and evangelicals conceive global mission. For liberals, global mission is the establishment of social justice, human rights, alleviation of poverty and human suffering, and the promotion of education, ecological and environmental concerns. For evangelicals, global mission involves not only these concerns of liberals, but also evangelism.

The issue of abortion is one area that divides liberals and evangelicals. Both groups are committed to the preservation of human life and its sanctity. While “for liberals, the responsibility of individual choice is sacrosanct” (246), the evangelicals uphold the scriptural principles to maintain the sanctity of life. Environment is an area where there is a common ground between liberals and evangelicals. Yet evangelicals would believe that the issue of human need should take precedence over environmental concerns. The issue of homosexuality and gay marriage is another point of contention. On this issue, evangelicals take a more fundamentalist posture, finding it against the Bible, destructive to the traditional family structure and human culture, and “sign of social disorder” (252).

Wellman says there is less clarity in the moral worldviews of liberals and evangelicals about the Iraq war. Although liberals find it theologically difficult to rationalize support for war, there are liberals who are Republicans by political affiliation who would not openly come out against war. For evangelicals, their “reasons were theologically based” (256), and they see it legitimate to deter evil, establish justice for people, with the possibility of mission among Muslims.

Wellman concludes that while the liberal churches “struggle to survive culturally,” evangelical churches are “fast becoming the dominant Christian religious subculture in the PNW” (272). Both groups have their distinct and consistent moral worldviews. Liberal worldview is more inclusive in nature, accepting diversity, and is affirming. Evangelical worldview is characterized by its Christo-centricity and its foundation on the Bible. These opposing worldviews have created tensions over key issues of differences such as abortion, gay marriage, and homosexuality. The author feels that despite the differences, they are “not diametrically opposed,” and he sees the possibility of mutual understanding and recognition.

The book is an important step towards understanding the complexities in the relationship between the two important streams of Christianity in North America. In the words of the author himself, the book comes out of his “attempt to wrestle with the internecine conflicts percolating in the American Protestant landscape” (xii). The author has succeeded in bringing this tension between evangelicals and liberals, and their strengths and weaknesses to the focus of the wider Christian world. While total objectivity is not possible in any human evaluation, nevertheless, the author has sought to be objective in his treatment of both the groups. He appears very conscious of the positive and negative aspects of the groups, and is quite often seen as appreciative and affirmative of the positive aspects of both groups.

The evangelical-liberal divide is a problem not confined to PNW which is the context of the author’s exploration. This is found in many places across the globe where there is a dominant presence of Protestant Christianity. Moreover, evangelicals and liberals are not just found in Protestant Churches. They are spread across a wide spectrum of Christian denominations. One wonders if a clear picture of evangelical-liberal tension and divide is possible from the kind of study the author undertook from a region involving a limited number of churches and people – including a disproportionate number of twenty-four evangelical churches and only ten liberal churches. The study of the evangelical-liberal divide points to the need for a more comprehensive project that would examine the tension and divide between an equal number of liberals and evangelicals across Christian denominations including the Catholic and Eastern Orthodox Churches.

The author claims that he was raised in a moderate evangelical tradition and now identifies himself a liberal. Although he is appreciative of evangelicals, he is very careful to distance himself from them, and does not conceal his inclination towards liberals. Thus, one gets the impression that the author moves away from a moderate stance. The book points to the possibility of common ground between evangelicals and liberals. One could also derive from the book the possibility for conscious efforts to reduce the gap between the two groups through mutual respect and understanding of each other. This could further lead towards exploring the possibilities for working together for common goals.