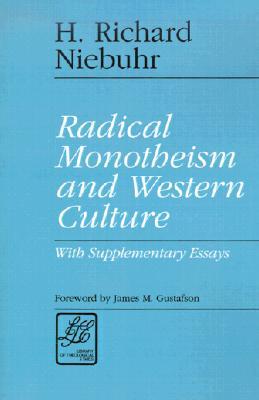 Every Fourth of July I end up thinking about this topic, knowing full well that lots of Evangelical churches across America are reveling in “Old Glory” and hosting “God and Country” Saturday night revivals, even as Liberal churches in the same towns cringe and argue about whether it is appropriate to have an American flag in the building. As a LiberalEvangelical I come down on these issues in some unexpected ways thanks in large part to the impact of a single book that influenced me more than almost any other in seminary: H. Richard Niebuhr’s Radical Monotheism and Western Culture.

I write book reviews from time to time, but this is more of a recommendation than a review. Niebuhr’s text isn’t as well know as some of the texts that his brother wrote, nor is it as internally coherent. It is, after all, a collection of essays, not a sustained argument. But it does introduce a very important distinction that has stuck with me for almost 20 years. Monotheism and Polytheism, we are all familiar with, but Niebuhr introduces the concept of Henotheism, a kind of degenerate monotheism that “believes” in one God but is in fact “that social faith which makes a finite society, whether cultural or religious, the object of trust as well as of loyalty and which tends to subvert even officially monotheistic institutions, such as churches” (11). With this formulation Niebuhr construes religious life as less a matter of confession and more a matter of loyalty, the true monotheist being loyal to all-beings-that-are and all-being-that-is part of creation. Rational assent to a statement of belief or creed is meaningless in the face of divided loyalty and any act that partitions off part of creation and elevates it above another is a kind of henotheistic idolatry.

I remember feeling that I had been slapped upside the head when I first read this text. It is brutal and uncompromising, but true to the work of the both the Niebuhrs (H. Richard and Reinhold) the text is also rich in pastoral instruction. Niebuhr wasn’t trying to break any skulls, he was instead calling on his readers to re-appreciate the radical claim of monotheism that not only is God one, but God is truly the creator and sustainer of all being, so no subset thereof is to be elevated above another or despised. It is a radical restatement of universal love i.e. an ideal, an unlivable task, an impossibly egalitarian love.

I remember putting my hand up in class (the very class in which I met my wife) and raising the possibility of aligned and mutually compatible loyalties. I tried to cite an example from the Eisenhower administration, when the Secretary of Defense, C. E. Wilson was said to have claimed “What is good for G.M. is good for America.” (Turns out this this is a misquote, and a big one!) Historical accuracy of the quotation aside, my point was simple. Is it not possible to build an institution (country, church, NGO, intellectual tradition, etc.) so that its ends and means line up with monotheism so completely that it might have a legitimate claim on one’s loyalty? Niebuhr warns that this is not possible. And I agree. But I still contend that this is an admirable aspiration for anyone involved with building or guiding an institution. For those of a more philosophical bent, it may be worth noting that this ideal lines up fairly well with one of Kant’s formulations of his categorical imperative: “Act only according to that maxim whereby you can at the same time will that it should become a universal law without contradiction.”

The more practical, important and pastoral point is that no extant institution ever actually rises to this standard. There is no country, or business, or denomination, or church, or historical figure, or pastor that might serve as a stand-in or substitute for God. There is no finite being to whom we might pay homage and render loyalty without reserve. To do so, fundamentally contradicts monotheism and constitutes idolatry.

So what about that flag, the stars and stripes, does it belong in the sanctuary? Well it would be strange for me to see it in my church since I’m in Canada, and Canadians tend not to put nearly as much emphasis on their flags. (Quebec is the big exception. The Quebec provincial flag is sometimes flown by itself, often symbolizing the separatist cause.) But what about in the U.S.? If my opinion matters, and it usually doesn’t, then I’d say leave the flag in the sanctuary. But be both tasteful and intentional about it.

By tasteful, I mean, don’t be like this guy.

When I say, “be intentional,”I have in mind the theme of my last blog. Be conscious of the relevant standard i.e. who or what is serving as the measure. If your church installs the flag as a norm for the congregation, then I think your church has a serious problem with henotheism. But if the relationship is reversed and the presence of the flag stands for the idea that our respective nations should also be held to the standard of universal love, then I say go for it. I’ll risk a very weird analogy, especially for most of my readers who come from “low church” traditions.

In many Anglican and Catholic churches across the world, congregations celebrate the Feast of Saint Francis of Assisi in the month of October. Sometimes, this is better known as “Blessing of the Animals” Sunday, where pets and livestock and sometimes even zoo animals are brought into the churches to receive blessings. The first time I saw this, having grown up Pentecostal, I had no idea what to make of it. I was used lots of sermons from the Hebrew Bible, so to my mind, when animals were brought into the sacred space it didn’t usually end well for the animals. (Reread Leviticus, Numbers and Deuteronomy sometime.) But when I came to appreciate the history of the tradition, I understood that it was less about a literal interpretation of All Dogs Go to Heaven, and more about widening the range and scope of the sacred. Peasants and farmers were in effect bringing those things most important to them and their livelihood along with them to church, not simply in their hearts and prayers but literally. If you’ll forgive the cliché: church wasn’t “going to the dogs,” but the dogs were coming to the church.

I’d recommend a similar attitude toward patriotic symbols and themes this July 4. None of us are discrete and separate individuals. We all live somewhere and in some community, even if those communities are very much damaged. So it seems to be entirely appropriate that we bring our whole selves to church in an effort to hold our whole selves to a higher standard.

Lincoln’s famous exchange is no less apropos for being frequently cited. When asked whether God was on the Union side in the Civil War, he reversed the questioner’s henotheistic assumption and turned it into a monotheistic call for action. “Sir, my concern is not whether God is on our side; my greatest concern is to be on God’s side.”

So bring those flags inside this Independence Day weekend, but do so as a call for monotheistic action and a reappraisal of our priorities.