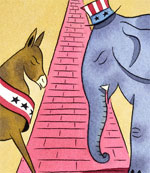 For at least two decades, single issue voters who mark their ballots exclusively on the issue of abortion have had an easy decision to make. The Democratic brand has come to represent the pro-choice position, while the Republican brand has come to stand for the pro-life position. Only on the rarest of occasions and with great risk to his or her standing in the party has an individual candidate broken ranks. Democrats risk the ire of women’s groups, while Republicans risk alienating their conservative religious base. It is significant that both Senators McCain and Obama are working to break the abortion stalemate.

In recent weeks both candidates have suggested that they might be open to moderating their party’s traditional stance on abortion. John McCain publicly floated the idea of nomination as his Vice Presidential running mate either Senator Lieberman or Governor Tom Ridge, both of whom are pro-choice Republicans. Reaction among the Republican base was mixed. Meanwhile, Barak Obama sought to distance himself from the traditional Democratic stance on abortion and emphasized to Pastor Rick Warren of Saddleback Church that his pro-choice position does not mean that he is pro-abortion. This year’s Democratic convention will also feature some pro-life speakers as well as a revamped party platform.

Still, the key issue for the Republican base and the Democrat base remains the selection of Supreme Court Justices, and both candidates have emphasized that they will nominate judges who share their judicial philosophy. Ultimately, the mutual public softening of positions on abortion may be less about changing policy, and more about rallying constituencies or dampening voter turnout. McCain is working frantically to close what some commentators have called the “enthusiasm gap” by emphasizing the importance of the Supreme Court to religious conservatives. Obama, on the other hand, by softening the traditional Democratic stance on abortion may be working to lessen enthusiasm among these same conservatives.

Read the Religion News Service article from the Pew Forum on the changes being made by the Democratic party.

Read the LA Times article that includes video clips from the recent Saddleback Civil Forum on National Leadership, where both candidates sat down for an interview on religious issues with Rick Warren.

Crass Cartoon as a Capital Offense? Not in my classroom.